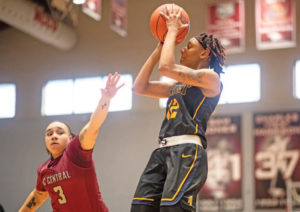 Despite not shooting well from the floor and the free throw line late in the game, the Aggies held on for a 52-49 win over archrival N.C. Central in front of a hostile crowd gathered at McDougald-McLendon Arena Saturday afternoon.

The Aggies (9-10, 6-0 MEAC) are still tied atop the MEAC standings with Norfolk State thanks to their sixth straight win. They have now won 12 straight road games against MEAC competition and they have won 17 of their last 18 games against the NCCU Eagles. N.C. A&T has also won 24 out of their last 25 games against MEAC opponents including the conference tournament, and head coach Tarrell Robinson moved into second place in all-time wins for the women’s program with win No. 131 passing his mentor Patricia Cage-Bibbs.

“We want to keep that going,” Robinson said about the Aggies’ defensive streaks. “Defense is how we win games. We rely on it heavily on days like today.”

To top it all off, junior C’Coriea Foy had a double-double in points (16) and steals (10). It was Foy’s first career double-double.

“That’s huge,” Robinson said about Foy’s double-double. “We think CC can really impact games for us defensively. I think with her, Mikaya Wilson and Le’on Hill, we have three of the best defenders in the league on our team.”