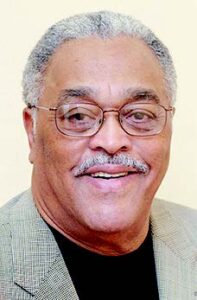 On Wednesday, December 29, 2021, heaven was commanded to attention as the angels began to shout and applaud the earthly life of Kenneth Allen Free Sr. as he transitioned from life in earth to eternal life in glory. Free was born on June 8, 1936, in Greensboro, N.C., the son of the late Lazelle Free and Margaret Free. He and the family later moved to Harrisburg, Pennsylvania and returned to Greensboro when Free was age 12.

The seeds of faith were sown early in his life as a long-standing member of Celia Phelps United Methodist Church. He sang in the United Methodist Men’s Choir, and he served on the Board of Trustees. He was a graduate of James B. Dudley High School and North Carolina A&T State University.

Free was employed by Central Motor Lines as a truck driver. He went on to serve three years with the United States Army in Germany, France, and Lebanon from 1955-1958.

Free went on to marry the late Carolyn Carter, and two sons, Kenneth A. Free Jr. and Benjamin L. Free, were born of this union.

He began his athletic administration career as the Director of the new Windsor Recreation Center before moving on to become a Regional Parks Recreation consultant for the State of North Carolina Department of Natural and Economic Resources. He was a former Greensboro Parks and Recreation Commissioner.

Setting the bar high as an accomplished athlete, recreation professional and collegiate athletics administrator, Free became the first full-time commissioner of the Mid-Eastern Athletic Conference (MEAC) in 1978. He helped build exposure for athletes at historically Black colleges and universities (HBCUs). Free was instrumental in the drive for MEAC institutions to attain NCAA Division I status, which became a reality in 1980.

In 1987, he gained national attention when he was named to the NCAA Division I Men’s Basketball Selection Committee, becoming the first African American appointed to that group. Free later served as Commissioner of the Eastern Intercollegiate Athletic Association from 1996 to 2006.

Free continued his drive for post-season football play by being a force in the development of the Freedom Bowl All Star Classic; and the Heritage Bowl, matching a SWAC team against one from the MEAC, the precursor to what is now the Celebration Bowl.

As a long-time sports advocate, Free was honored at a groundbreaking ceremony on November 16, 2018, at Barber Park. Greensboro Parks and Recreation named a new outdoor basketball court and the existing indoor courts at the George C. Simkins Indoor Sports Pavilion at Barber Park in his honor.

Free received from the North Carolina Recreation and Parks Society the prestigious Fellow Award which is the highest award in the society. He is also a recipient of the Order of the Long Leaf Pine, one of the state’s highest civilian honors presented by the Governor.

“I may not deserve this honor, but I sure needed it,” Free joked at the ceremony. “This means the world to me. I’ve gotten other recognitions, but this has really touched me. I’m thankful that I’m still here to see the progress here and this monument that will go on long after me.”

“It’s all about the good Lord putting us in the places where we need to be,” said Free.

In addition to his parents, he was predeceased by a daughter, Delana Free, and a grandson, Stephen A. Allen. Fond memories will be cherished by his two loving and devoted sons, Kenneth A Free Jr. (Michelle) Benjamin Free (Jerilyn); one daughter, Kimberly Sanders; five grandchildren, Anthony A. Anderson, Kenneth A. Free, III (Trey), Olivia, Skylar, and Camille Free; one sister, Loretta F. McKee; one brother, Lazelle Free (Hannah); a niece and many nephews, special and loving friend, Felicia J. Kornegay, and a host of relatives and friends.

In lieu of flowers, donations can be made to Clergy 4 Cure, Inc. for the Kenneth A. Free Leadership Academy.