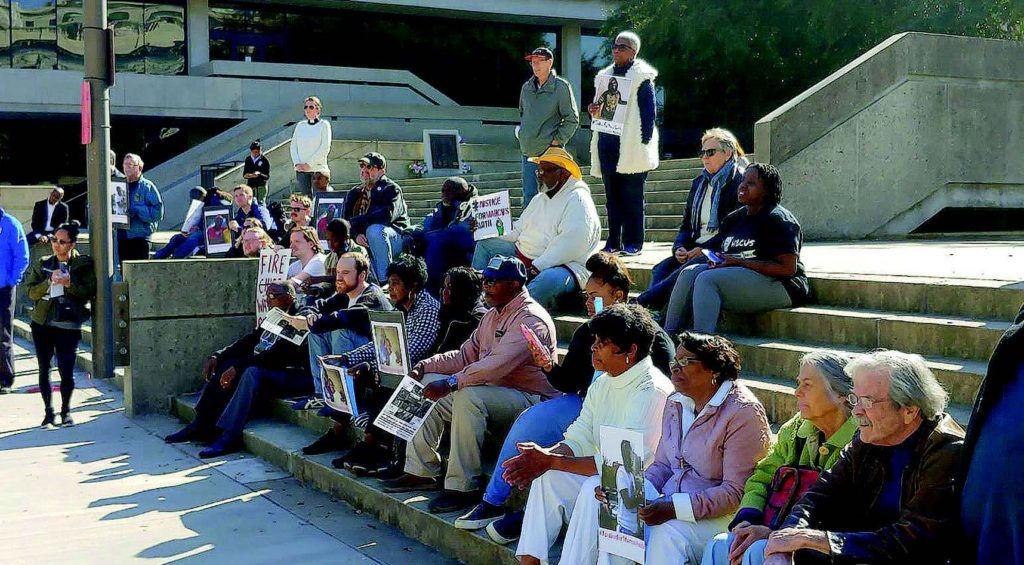 Triad residents gather for a rally at Governmental Plaza to demand justice for Marcus Smith, an African American man who was hogtied by police and died while in custody in 2018.
Photo by Yasmine Regester/Carolina Peacemaker

The Greensboro City Council has agreed to discuss launching an independent investigation into the death of Marcus Smith, a man who died last year while in police custody.

The North Carolina NAACP, Beloved Community Center, Greensboro Pulpit Forum, the #JusticeforMarcusSmith Coalition, and community members joined the Smith family for a rally demanding justice for his death. The groups gathered outside City Hall on April 1 before the scheduled council meeting.

The speakers demanded the four officers involved be held accountable for Smith’s death and they called for the firing of Greensboro Chief of Police Wayne Scott. 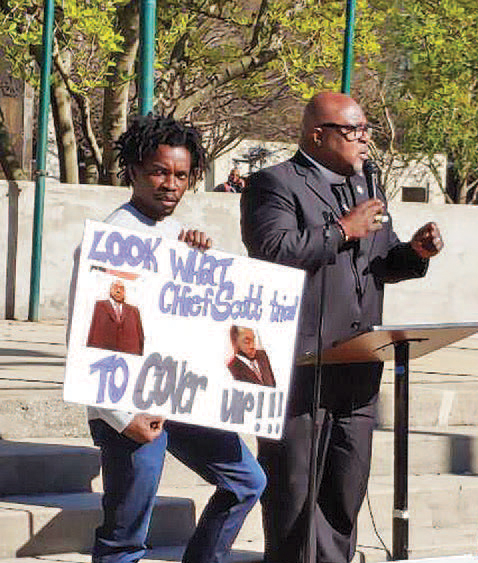 “Marcus Smith died too soon at the hands of irresponsible police. Something has to be said. We are here to remove the cancer of corruption in this city. We believe that justice must be served,” said Rev. Daran Mitchell, president of the Greensboro Pulpit Forum.

The more than 50-member caravan then took the rally inside the Greensboro City Council chambers for the city’s monthly town hall meeting to voice their concerns, often with emotional testimony. The #JusticeForMarcusSmith Coalition presented a petition with 100,000 signatures requesting the police chief be terminated from his current job.

“Marcus Smith was a beloved member of our community and he was killed by the Greensboro police. This was a homicide. ‘Hogtying’ is immoral and illegal. There are other ways to restrain people. When you are poor, Black, and homeless, you become a target, and we won’t just accept that,” said Zalanda Woods, member of the coalition and the GSO Homeless Union.

The aforementioned groups have all signed a letter calling for the Greensboro City Council to take immediate action to reform a culture of violence in the Greensboro Police Department.
Council members Sharon Hightower and Michelle Kennedy said that they support the city conducting an independent review into Smith’s death.

“The community has questions that no one has answered for them. People are upset and angry, and we have to give them some answers,” said Hightower, who added that she hopes to find an agency with oversight into legal policy.

Kennedy said that her stance on the issue hasn’t changed, but she had to wait on certain processes to play out before making a motion for an independent review.

“For me this has been an ongoing process. Now it’s time to take the first step,” said Kennedy. “We don’t have a problem spending millions of dollars on a parking garage, I hope that a loss of life is something we can see of value too.”

Council member Justin Outling left at one point during the meeting and did not return to the dais. Calls made to Outling were not returned.

At its next general business meeting on April 16, the council is expected to discuss what an independent review will look like for the Smith case. There is the possibility of hiring an outside agency to re-review the facts of the case and make recommendations to the city on how to implement solutions.

In police body camera footage that was taken on September 8, 2018, a disoriented Smith is seen repeatedly asking the officers for help on North Church Street in downtown Greensboro. They agree to get him medical attention and the officers put him in the back of a police car. Although he was not under arrest, Smith became visibly panicked and began to struggle to get out of the car. The officers let him out of the car, but then proceeded to subdue him with a RIPP Hobble device, and placed into a position known as the ‘hogtie restraint.’ Smith stopped breathing.

In an autopsy report released on November 30, the North Carolina State Medical Examiner’s office listed drugs and alcohol as substances in Smith’s system, as well as cardiovascular disease, but ruled that Smith’s being hogtied in that position played a role in his homicide.

The Guilford County District Attorney’s office stated that the officers acted at all times within the scope of their duties and were subsequently cleared of any wrongdoing. Chief Scott sent out a press release before the State Bureau of Investigation completed its report and said that Smith ‘collapsed’ and ‘died an hour later at the hospital.’ Smith’s family contends that narrative is false, after Smith’s father and the family’s attorney viewed the police footage.

“I’m standing here to demand justice for an unarmed child,” said Smith’s mother, Mary, to the crowd of supporters.

At a December 2018 Greensboro City Council meeting, the governing board stated the city will place mental health professionals within the police department to help defuse situations where mental health and/or substance abuse are a factor.

Council member Kennedy said those discussions with the police department have already started. The individuals would be first responders, not police, who are qualified mental health clinicians.

This isn’t the first time that the Smith family and coalition has requested that council order an investigation into Smith’s death. On November 13, the Smith family delivered a letter to the Greensboro City Council asking the council to view the police recording and take punitive action against the officers involved.

After no formal response from council, the Smith family called on council members again at a community meeting on December 3 for an apology and compensation for their family member’s death. In addition to that, they asked for swift consequences for the police department personnel involved, ban hogtying, train officers to handle mental health issues nonviolently, establish a legitimate process to investigate all allegations of police misconduct and to support citizen-led initiatives to reform the culture of the Greensboro Police Department.

“It’s tough on us because we’ve had to relive this. We haven’t had a chance to grieve for him because we are steady fighting for justice for him,” said Kim Suber, Smith’s sister. “But make no mistake about it — we’re not going anywhere at all until we feel comfortable and until we feel satisfied that justice has been done for my brother.”