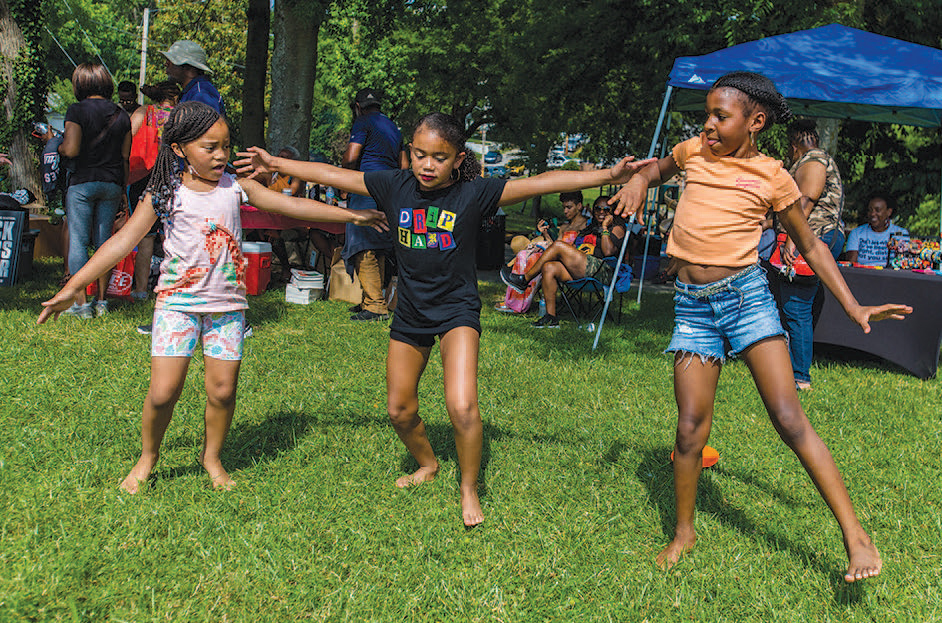 Children played and friends greeted one another, while the smell of barbecue wafted through the air and the words to “Lift Ev’ry Voice and Sing” played over the loud speakers in LeBauer Park this weekend.

Saturday’s Black Food Truck Festival, which brought more than 200 people to the park, was just one of the multiple events celebrating Juneteenth across the city.
The celebration of Freedom Day originated in Texas. Juneteenth recognizes the date when Union troops arrived in Galveston, Texas, on June 19th, 1865, to tell enslaved people that the Civil War had ended and their freedom was ensured. However, the announcement came two and a half years after President Abraham Lincoln’s Emancipation Proclamation – which had become official January 1, 1863.

Organized by a collective of Black creatives and community leaders, dubbed the Juneteenth GSO Committee, the Greensboro community celebrated Juneteenth this year with a hybrid of virtual and in-person events on June 17-20. The multiple-day celebration consisted of live music performances, a family day, a farmer’s market, an art awards ceremony, a Black food truck festival, poetry night and a drive-in movie.

In May of 2020, community organizer April Parker and District 1 Councilwoman Sharon Hightower helped to get The Greensboro City Council to unanimously pass a resolution to make Juneteenth a city holiday, and City Departments offered a day of virtual events on social media. The council also declared the day as a paid holiday for city employees beginning in 2021.

“No one gave us anything. It was a longtime fight to this point. I feel that this was a small win. But sometimes you need those small wins while in the long fight for Black liberation. It [council’s decision] didn’t feel as much about political power as it was about solidifying our Black identity in Greensboro – outside of the story of integration that so much of Greensboro history is tied to,” said Parker.

Juneteenth was first honored in Greensboro on June 19, 1996 with a citywide festival led by the late Pat Fortune, a local Black entrepreneur and community leader. Her vision to give back to the community helped launch multiple Juneteenth Festivals throughout North Carolina.

Parker noted that the committee’s vision was to host a citywide event that would not only celebrate Black identity, but also Black entrepreneurship and the arts.

“Durham has Black August in the Park, Charlotte has Black Restaurant Week, but Greensboro didn’t have any overt Black festivals here,” she said. “So it was that much more important to us to celebrate June 19 as a citywide event. And it’s important that we are supporting Black owned businesses because it is ten times harder for us to launch and maintain those businesses.”
Uptown GSO, INC., a community development nonprofit owned by Joseph Wilkerson, created a free commemorative Juneteenth Greensboro magazine that featured Black-owned businesses, artwork and history facts.

The city continued its virtual programs on Saturday this year, which included various discussions on soul food, the art of storytelling, music, art and African American history.
Hightower noted that the events were meant to celebrate and educate the general public about the significance of the day.

“We wanted people to see our celebration and to join us in remembering a critical time in our lives that has impacted Black people significantly,” she said.