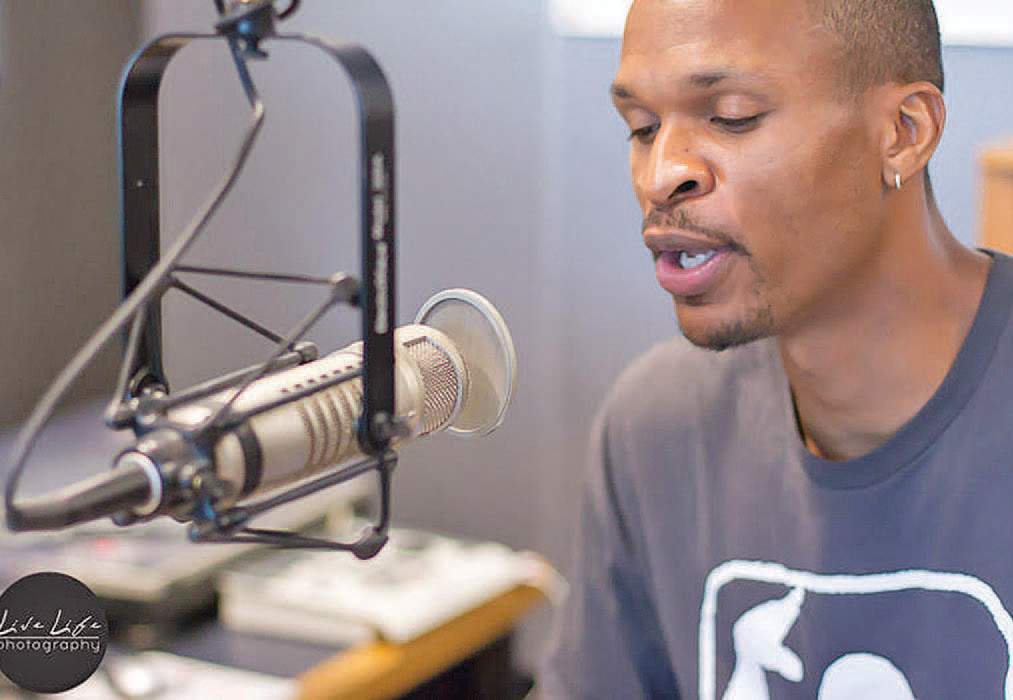 Josephus lll is the founder of The Poetry Café, which can be heard on North Carolina A&T State University’s radio station, WNAA 90.1 FM.

They say if you do what you love you’ll never have to work a day in your life. Greensboro poet Josephus Thompson the III agrees.

“I tell people all the time to find something that you are willing to do for free and then the trick is doing it so well that people are willing to pay you for it,” he said.

A trick that Thompson has mastered. He says that no matter the amount of money the key is to treat every job the same.

“I give the same energy and same effort either way. I’m there for the event whether to teach or host and I love it,” he said. “Writing, creating, performing and hosting is just a part of who I am which is why I’m pretty good at it.”

A military brat, Thompson, comes to the Gate City by way of North Carolina A&T State University and quickly put down roots. While he’s not utilizing his degree in industrial engineering in the traditional way, he’ll tell you that he puts it to use daily, especially on the business end of things.

“I engineer communities and events. Industrial engineering is all about efficiency and I would like to think that I’m finding efficient ways to utilize poetry to teach, inspire and mentor.” And build he does. 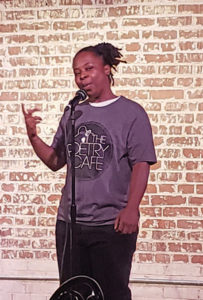 Alysha Smith, who goes by the stage name Passionate LY, performs at The Poetry Café at Triad Stage in Downtown Greensboro.

A man of many hats, the 42-year-old husband and father of one can be found exposing anyone to poetry whether it’s children, teenagers, teachers, community advocates, business professionals or a late-night crowd looking for a drink and a relaxing vibe. He began his love affair with spoken word in high school and by 2009 he turned it into a full-time career.

He’s performed for Oprah Winfrey, Nikki Giovanni, opened for Kanye West, Floetry, shared the stage with the Last Poets and performed throughout the United States and in Australia, London, Seoul, Ireland and South Africa. He’s been featured as a guest columnist in Go Triad, has presented and hosted a TEDx Greensboro talk and now sits on their planning committee. While he’ll admit he’s done some “pretty cool stuff” he won’t let you call him a big deal. He insists that it’s a product of investing in your community.

“When you’re growing, building and supporting your community, they’re looking for people to showcase when big names come to town. A lot of people are always trying to get away from where they’re from but sometimes you have to stay and invest, and it comes back to you 100-fold.” As the host of WNAA 90.1 FM’s The Poetry Café, he showcases talented authors and artists of the Triad in the genres of poetry, hip-hop and R&B music. The show airs on the radio every Tuesday from 6 to 7 p.m. every Tuesday and doubles as a monthly open mic every second Saturday in Downtown Greensboro at Triad Stage’s Upstage Cabaret, 232 South Elm St.

“We find ways to introduce new voices into the Triad,” Thompson said. Asherah Bosley is one of those voices. Having met Thompson while she was in college, he challenged her to come out of her shell and share her talents on a larger scale. She frequently graces The Poetry Café stage, often providing background vocals for the poet.

“Poetry Café means confidence and a moment to share a piece of yourself, and your gift, with someone,” Bosley said. Most recently, The Poetry Café has taken to the screen – both television and YouTube. Thompson shopped the idea of The Poetry Café as a television show to a few local stations and WMYV My 48 picked up the idea. The deal was made for 15 episodes to air on Sundays at 11:30 p.m., with the show shooting at Triad Stage with post-production options. The show garnered 3,500 households within it’s first week and maxed out at 9,500 households during its first season, averaging 4,500 households per week. Thompson is working on the next season of episodes now. 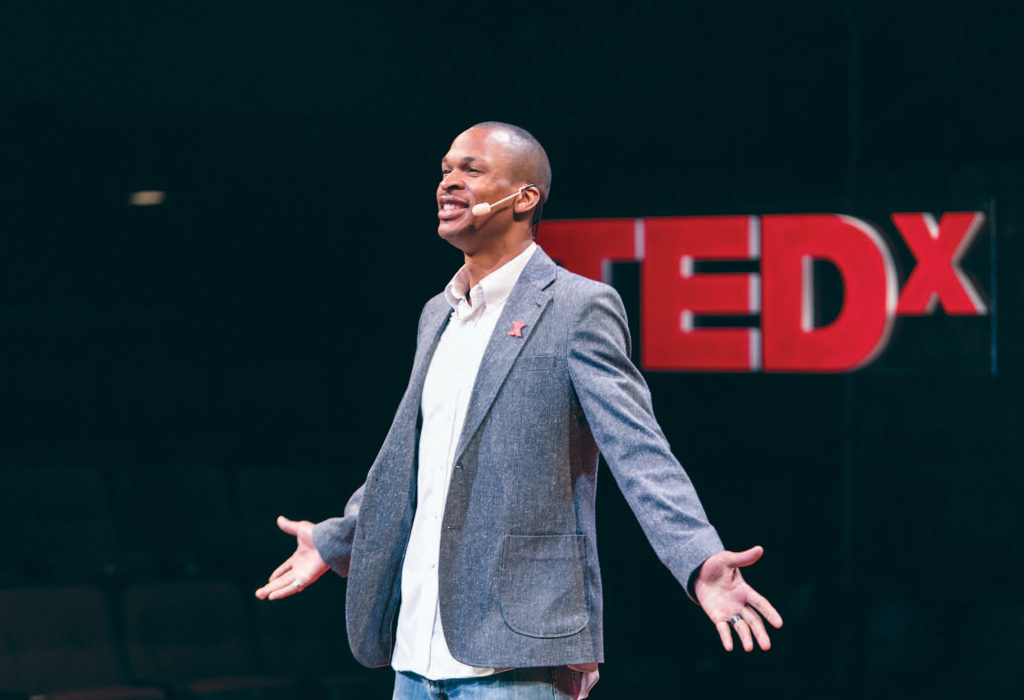 “We had a crazy return on our numbers in television land. We typically have 100 people come to the show about once a month so I was amazed that 4,000 households would be up that late on a Sunday night watching poetry,” Thompson said.

The same shows will be on The Poetry Café YouTube channel and Amazon Prime. Thompson’s goal for the next year is to have a million subscribers on the YouTube channel and to start shooting on an international level, showcasing poets from all over the world.

The Poetry Project, founded by Thompson, allows him to “use poetry as a catalyst for literacy, leadership and service” in both educational and corporate settings. Through structured workshops, poetry slams and open mics, participants – mainly K-12 students – are given an opportunity to explore the power of spoken word and are encouraged to use it for literacy comprehension, service learning and finding their voice.

“It’s a chance to grow leaders by showing them how powerful their voices are.”

Recently, Thompson developed The Poetry Project Institute, a series of professional development workshops for teachers to provide them with the tools, resources and training on the use of spoken word in the classroom in the areas of literacy, service learning and character development.

“One of the biggest complaints I hear from teachers is that they can’t teach poetry, but we’ve helped fixed that. We created a video, audio and a printed poem that will come with annotated text and lesson plans for K-12,” he said. “If I can train 100 teachers, then those teachers can impact 1,000 students that I wouldn’t be able to reach. Now we can.”

The goal is for teachers to learn how poetry can be used for positive change in their classrooms and communities to address problems, formulate solutions and battle peer pressure while expanding the message of tolerance and diversity. Thompson hopes to have the programming in at least 100 school districts by the end of 2020. For more information, visit www.josephusiii.com.

Tune in for The Poetry Café WNAA 90.1 FM Airs on the radio every Tuesday from 6 to 7 p.m. The show doubles as a monthly open mic every second Saturday in Downtown Greensboro at Triad Stage’s Upstage Cabaret, 232 South Elm St.