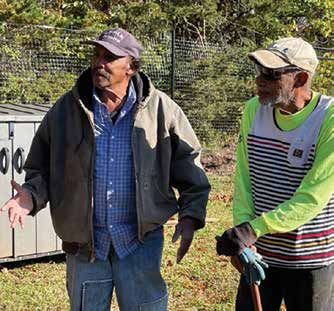 Black churches across Guilford County are joining forces with local Black farmers in an endeavor to provide fresh, healthy food sources to Black communities where grocery stores and supermarkets are minimal to nonexistent. The collaboration, led by Saint James Presbyterian Church of Greensboro with the logistical help of the Black Church Food Security Network (BCFSN) of Baltimore, Md., takes a multi-faceted approach: 1. Gather a group of 10 or more churches to become members of BFSN. 2. Set up a local market at each participating church where Black farmers can sell their goods directly to the church, directly to church congregants, and to residents in the surrounding community. 3. BFSN will provide each church with $500 in “seed” money to establish or re-establish a community garden on church grounds. Lastly, the network will help with logistical support such as the transport of goods directly to the churches. The goal is to utilize the stabilizing force of the Black church to combat food insecurity while insuring the survival of one of America’s most valuable resources, the Black Farmer.

The U.S. Department of Agriculture defines low food access areas as places where at least 33 percent of residents are more than a mile away from a grocery store or supermarket. Residents in such areas have difficulty accessing fresh vegetables and fruits. Today, there are 17 low food access areas in Greensboro and seven in High Point, making these areas food insecure. 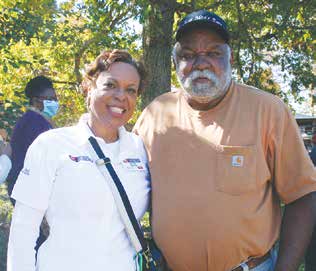 The Memorial Industrial Community Development Farm was founded by 76-year-old Vern Switzer of Rural Hall, who has been farming for 42 years and 85-year- old Dr. English Bradshaw. The vegetable farm is located on the former site of the Memorial Industrial School in Rural Hall. The school began as an orphanage for African America children in the late 1800’s and closed in 1971. Bradshaw has a special connection to the site as one of the orphans, who attended the school. In one year, the farm incubator has donated more than 1,200 pounds of produce to help combat hunger.

“Our purpose is to put food in the community and have sustainability,” said Bradshaw. When asked why he spends time growing vegetables, Bradshaw replied, “I don’t know what makes me go. I have not been on vacation in 23 years. I just know I have to do it.”

On the prospect of Black farmers selling produce directly to consumers at local churches, Vern Switzer was delighted by the idea. He shook the hand of Rev. Brown and proclaimed, “Man, we can do this!” He added, “Farming is the most important job in the world. They aren’t making any new land. Black Farmers matter because not many of us are left.”

Black farmers have become a rare breed and their numbers continue to dwindle primarily due to the socioeconomic inequities they have faced for well over the past 150 years such as discrimination in federal lending practices, denials of private loans, violence, intimidation, tax sales of property and foreclosures. All these factors have led to a significant decline in the number Black farmers.

Brown said issues of weather, water as well as politics have led to a perilous environment of instability in which Black farmers are forced to navigate. One solution, according to Brown, is that the church can provide Black farmers with stability by paying for produce up front. “The church is the steady beat. Get Vern on the church budget. The church provides the backup when a bank denies a loan,” said Brown. 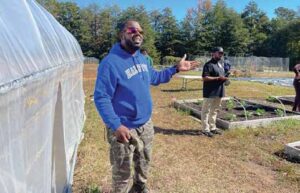 James Gardner, director of PDY&F Community Garden at Evangel Fellowship Church of God in Christ in Greensboro. Photo by Afrique I. Kilimanjaro/Carolina Peacemaker.

Gerald Hall, owner of Eggman’s Fresh Brown Free Range Eggs in Pleasant Garden, was raised on the farmland which he farms along with three of his brothers. Hall has been farming for 23 years and at one time, he was the largest independent egg producer in the state if N.C. with as many as 6,000 chickens. Hall currently has 600 chickens and he’s preparing to raise a new brood for egg production.

Hall described farming as a good life. “My Dad raised us to be on our own and do what we do. Me and three of my brothers live on the same street. This land has been in my family for generations.

“We need to know where our food is coming from. Fresh costs more but, by God, you’re eating so much better,” said Hall. “My fresh eggs stay in a circle and don’t run all over the pan when you crack it. It stays bright and you see white on each end. If an egg sits in the store long, it’s runny.”

Brown said this collaboration between the Black church and Black farmers provides an anchor in the creation of sustainable food systems. He added, “This partnership can have a positive impact on food security in the Black community. Bringing fresh foods directly to the Black community will positively impact physical and mental health outcomes of area residents.”

Nestled behind trees in northeast Greensboro sits the PDY&F Community Garden at Evangel Fellowship. The vegetable garden and tilapia farm are operated by director, James Gardner. He explained that the purpose of cultivating a community garden is to, “create a springboard that will feed Greensboro, educate the community, and launch a new generation of Black and Brown farmers.” Gardner and the church have plans to expand the garden soon to grow fruit trees.

In one year, the community garden led by Gardner, donated more than 140,000 pounds of produce and tilapia.

In order establish a community garden, Switzer advised tour attendees to get two to three people who really know about farming and growing a garden. He hopes the churches will use the farm he and Bradshaw have established as a model for future church community gardens. Both men said it’s important to have fencing to keep out deer and other pesky animals; have a reliable water supply; establish a greenhouse for year-round planting; and save seeds from one season to another.