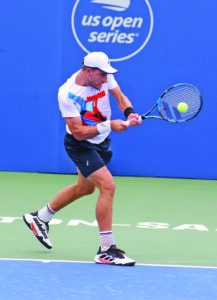 In second round action of the Winston-Salem Open Tennis Tournament played on center court, James Duckworth defeated fellow Australian Thanasi Kokkinakis in three sets, 4-6, 6-3, and 7-6 to advance out of a field of 48 players.

The Winston-Salem Open is an ATP 250 tennis tournament in North Carolina and one of seven U.S. Open series events leading up to the year’s last major in Flushing Meadows, N.Y., the U.S. Open.

The tournament, which takes place at the Wake Forest Tennis Complex in Winston-Salem, hosts 48 players in singles and 16 teams in doubles. For 2022, organizers are offering prize money of $731,935.

This year, the singles champion will take home $100,475, while the runner-up will pocket a cool $57,660. In doubles, the winning team will earn $39,530, and the runner-up pair will split a smaller paycheck of $20,700 for their efforts. The most significant percentage increase for players comes in the qualifying rounds, where the first-round qualifiers earn $2,070 and the second round $1,145, respectively.