By Hazel Trice Edney, special to the Peacemaker from Trice Edney News / August 13, 2020 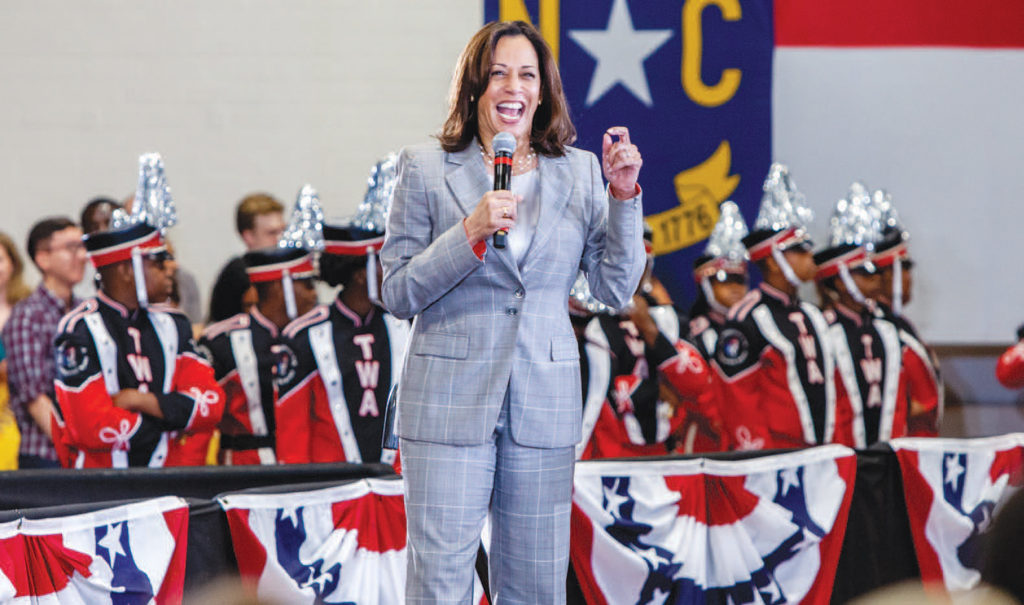 During her own campaign for the U.S. Presidency, Sen. Harris held a campaign rally in 2019 at Smith High School in Greensboro. Photo by Ivan Saul Cutler/Carolina Peacemaker

A 55-year-old Black woman with Indian and Jamaican ancestry, Harris becomes the first woman of color nominated to the top of a major ticket in a U. S. election. 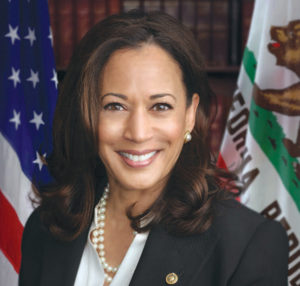 U.S. Senator Kamala Harris (D-Calif.) is the first woman of color nominated to the top of a major ticket (Vice President) in a U.S. election. Photo by Ivan Saul Cutler/Carolina Peacemaker.

“I’ve decided that Kamala Harris is the best person to help me take this fight to Trump and Mike Pence and then to lead this nation starting in January 2021,” said Biden, 77, in an email Tuesday. The two were expected to make their first appearance together as running mates in Wilmington, Delaware on Wednesday, August 12.

The announcement came after weeks of anticipation after Biden announced he would offer the vice presidency to a woman. The moment grew even more tense as Biden interviewed a string of women, including Michigan Gov. Gretchen Whitmer who is White and former Congressional Black Caucus Chair Karen Bass, also of California.

Harris responded on Twitter: “Joe Biden can unify the American people because he’s spent his life fighting for us. And as president, he’ll build an America that lives up to our ideals. I’m honored to join him as our party’s nominee for Vice President, and do what it takes to make him our Commander-in-Chief.”

Harris, a longtime friend of Biden, was not widely speculated to be Biden’s pick; particularly given her sudden attack on him during a June 27 presidential debate concerning remarks he had previously made about having worked with two segregationist senators. Biden was making a point about civility and how he has been able to work across the aisles to pass legislation. But Harris tersely pointed out how segregationist politicians had affected her childhood. Though she made it clear that he is not a racist, she called Biden’s comments “very hurtful.”

Biden barely recovered that night but said Harris’ remarks mischaracterized “his position across the board.” The tense moment clearly stung Biden, but mostly shed a negative light on Harris whose remarks were widely criticized as harsh and misleading. But, this week, Biden proved that he does not hold grudges, placing her alongside him at the very top of the Democratic ticket.

It remains to be seen whether Harris’ historic candidacy as a Black woman and as a woman will engender enough favor from a racially and gender-diverse constituency to defeat the Donald Trump – Mike Pence re-election campaign with the traditional two White males. Trump’s Republican ticket is seen as widely supported by right wingers and White supremacists as well as traditional Republicans.

However, amidst racial tension across America which re-ignited protests after the killing of George Floyd, Trump has slipped in the political polls, several showing Biden leading him with double digits. The coronavirus pandemic, which has killed more than 160,000 people, including a disparity of African Americans, has also illuminated questions about Trump’s political deficiencies.

America will now scrutinize the voting and policies pushed by Harris, who, since in the U. S. Senate, has become known for her sharp questioning during Senate hearings and for her criminal justice advocacy. But given that Biden is the presidential candidate, it is his record that must be scrutinized the heaviest.

Having served 36 years (1973-2009) in the U. S. Senate and eight years as vice president under President Barack Obama, the nation’s first Black president, it is believed that Biden has been thoroughly vetted. His judgment in choosing Harris as his running mate will now be his greatest decision under scrutiny. He is already receiving accolades.

“Joe Biden nailed this decision,” said Obama in a statement Tuesday. “By choosing Senator Kamala Harris as America’s next vice president, he’s underscored his own judgment and character. Reality shows us that these attributes are not optional in a president. They’re requirements of the job. And now Joe has an ideal partner to help him tackle the very real challenges America faces right now and in the years ahead.”

Obama continued, “I’ve known Senator Harris for a long time. She is more than prepared for the job. She’s spent her career defending our Constitution and fighting for folks who need a fair shake. Her own life story is one that I and so many others can see ourselves in: a story that says that no matter where you come from, what you look like, how you worship, or who you love, there’s a place for you here. It’s a fundamentally American perspective, one that’s led us out of the hardest times before. And it’s a perspective we can all rally behind right now.”

Kamala has spent her life fighting injustice. It’s a passion that was first inspired by her mother, Shyamala, an Indian American immigrant, activist, and breast cancer researcher.
Growing up in Oakland, Kamala had a stroller-eye view of the Civil Rights movement. Through the example of courageous leaders like Thurgood Marshall, Constance Baker Motley, and Charles Hamilton Houston, Kamala learned the kind of character it requires to stand up to the powerful, and resolved to spend her life advocating for those who could not defend themselves.

After earning an undergraduate degree from Howard University and a law degree from the University of California, Hastings, she began her career in the Alameda County District Attorney’s Office.

In 2003, Kamala became the District Attorney of the City and County of San Francisco. Among her achievements as District Attorney, Harris started a program that gives first-time drug offenders the chance to earn a high school diploma and find employment.

Having completed two terms as the District Attorney of San Francisco, Kamala was elected as the first African American and first woman to serve as California’s Attorney General. In this role, she worked tirelessly to hold corporations accountable and protect the state’s most vulnerable people.

Over the course of her nearly two terms in office, Kamala won a $25-billion settlement for California homeowners hit by the foreclosure crisis, defended California’s landmark climate change law, protected the Affordable Care Act, helped win marriage equality for all Californians, and prosecuted transnational gangs that trafficked in guns, drugs, and human beings.

In the United States Senate, Kamala’s mission remains unchanged: fighting for the rights of all communities in California. Since taking office, she has introduced and cosponsored legislation to raise wages for working people, reform our broken criminal justice system, make healthcare a right for all Americans, address the epidemic of substance abuse, support veterans and military families, and expand access to childcare for working parents.

It’s the privilege of Kamala’s life to work on behalf of the people of California. She lives in Los Angeles with her husband, Doug Emhoff, and is stepmother to Ella and Cole Emhoff.