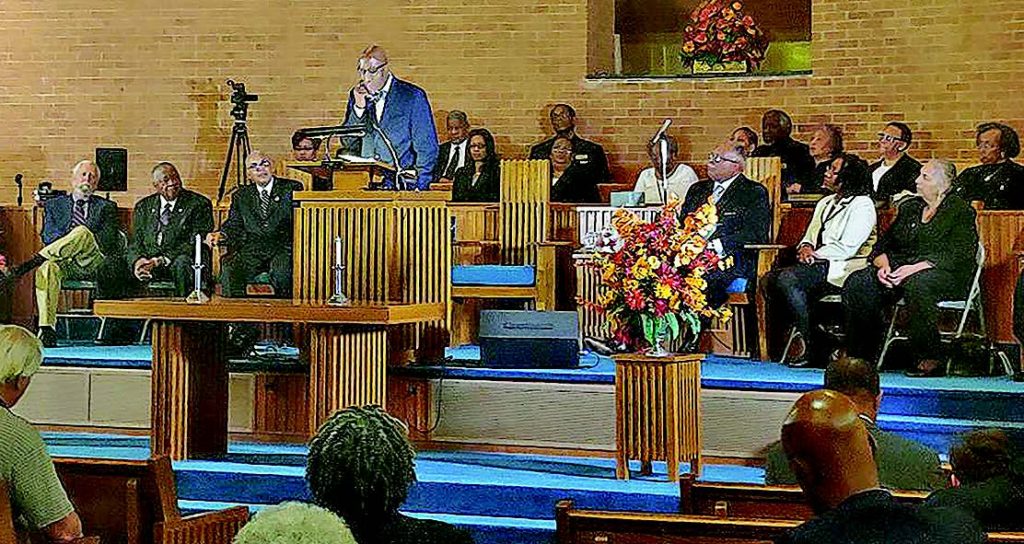 “Right now is the time for all of us to do the work of faith,” said Rev. J. Herbert Nelson, clerk of the Presbyterian Church (USA) on November 3 at Shiloh Baptist Church.

Rev. Nelson was the guest speaker for Sunday’s Interfaith Worship Service on “The Role of Church Communities in Today’s Quest for Economic, Racial, Environmental and Social Transformation.” The interfaith service was one of a series of events held to remember the 40th Anniversary of the 1979 Greensboro Massacre.

Rev. Nelson directed listeners to the scripture Luke 9:57-62 for the framework of his sermon on the church doing the social justice work God has called on the church to do.

“This is not easy work. There is an urgent call on the life of the Christian church. Jesus is calling us right now. Every one of us has the responsibility to do the work of faith,” said Rev. Nelson.

He added that the church must come outside itself and take a role in the larger context of the community, even at the risk of the life of the clergy and the church.

“We are commemorating the lives that were lost. The folks who we celebrate today and those who survive today, were not folks standing around waiting for something to do, they were doing something and they gave of themselves the something that went further than themselves,” he said.

“We must do more than just remember. There’s no justice without reconciliation, and no reconciliation without justice,” said Rev. Dr. Johnny B. Hill, dean of Shaw Divinity School in Raleigh.
Last month, a group of clergy asked the City of Greensboro to give “an apology of substance” to the survivors, families and the community for its role in not protecting the marchers during the violent attack.

Yvonne Johnson, Greensboro Mayor Pro Tem and At-large City council member, made a sincere apology to the congregation on Sunday about the massacre.

“Sometimes something positive can come out of tragedy, and one of those things was the Truth and Reconciliation Commission. As a representative from the city, I am deeply sorry that we knew and yet we did not act. It saddens me that five lives were lost that did not have to be lost because we did not do what we should have done. Although I was not a councilwoman then, I want to say I am sorry, I apologize for the city’s lack of action that may have saved lives, may have not wounded people and may not have brought shame to the City of Greensboro. To the survivors and families, may God hold you in his hands,” she said.

Rev. Nelson Johnson and his wife, Joyce, of Beloved Community Center led the period of remembrance and blessings, calling Greensboro Massacre survivor Signe Waller to the alter and invited supporters to form a circle of love around them.

“We’ve come to seek the prayers of this community,” said Rev. Johnson.

On November 2, there were Educational and Movement-Building Panels and Workshops at Pfeiffer Chapel on the campus of Bennett College for Women; and the musical production, “JoyUSJustUS,” by ContraTiempo, a multilingual, urban-based dance company at NC A&T State University.