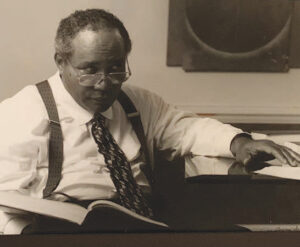 Walter Thaniel Johnson Jr., 81, of Greensboro, N.C. passed away peacefully on Saturday, July 24, 2021. He was the second child of Walter T. and Gertrude Johnson, Sr. Walter was born and raised in Greensboro where he graduated from James B. Dudley High School in 1957. He attended and graduated from North Carolina Agricultural & Technical College in 1961 with a degree in Engineering Physics. He was student body president and a member of the ROTC. Walter enlisted in the United States Air Force, but was deferred in order for him to make history when he became the first African American student to enroll in Duke University through the School of Law in the Fall of 1961.

After law school, Walter began his service as a Captain in the JAG Corp at Stewart Air Force base in Newburgh, N.Y. On March 20, 1965, Walter married the love of his life, Yvonne Jeffries. This union produced four children. After his military service, Walter moved back to his hometown of Greensboro where he began his law career as a Solicitor (now known as an Assistant District Attorney) for the State of North Carolina. Thereafter, he went into private practice until 1980 where he was called into government service by then Governor Jim Hunt as the first African American to serve as Chairman of the N.C. Parole Commission. During the course of his legal career, Walter, taught at both Duke Law School and N.C. Central School of Law as an adjunct professor. After Walter’s service with the state, he opened his own law practice until his retirement in 2004.

Walter was a pioneer and a trailblazer. He served as the first African American Chairman of the Greensboro Public School Board in the late 1960s. He also developed businesses in chemical production and contracting. He was a founding member of BARJO Chemicals, Inc. His contracting company was responsible for building affordable housing in Northeast Greensboro.
Walter was a life-long member of the Providence Baptist Church where he served multiple terms on the Board of Trustees as well as attorney for the church.

Walter had a zest for life, and derived great joy from his family, friends and various sporting activities. He particularly enjoyed his workout at the Hayes Taylor YMCA. Walter had a wide collection of Stalwart friends and associates that enriched his life. He was an avid reader and a huge supporter of N.C. A&T Athletics and all activities in which his wife, children and grandchildren participated.