In New Picture Book Tina Turner Reflects on her Life 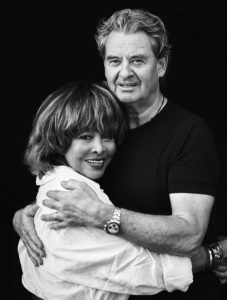 In “That’s My Life,” the Queen of Rock n’ Roll reflects on growing up in Nutbush, Tennessee, and how her hometown became an escape from the harsh realities of her life. Now at age 81, Tina is pictured here with her husband, music executive Erwin Bach. They reside in Zurich, Switzerland. Photo courtesy of In Style Mag/ Charlie Gates

At 81, Tina Turner quietly reflects on her “imperfections and all” in a telling new pictorial autobiography where she explores her fashion and artistic expressions.

In “That’s My Life,” the Queen of Rock n’ Roll reflects on growing up in Nutbush, Tennessee, and how her hometown became an escape from the harsh realities of her life.

“I was the child who always had scraped knees and tousled hair because I climbed trees and rolled in the grass,” the “Private Dancer” singer writes. “As an adult, I wanted my clothing to reflect that free spirit and keep it alive. Leather, feathers, silk and other natural fibers, metals, stones, and gems make me feel at one with the natural world I love.”

Turner’s life story is well-documented. Chronicled in the blockbuster 1993 autobiographical film, “What’s Love Got to Do with It,” the famed singer suffered through a violent marriage to Ike Turner.

The unspeakable battering and sexual assault besieged upon her by her former and late husband raised eyebrows within the music industry. It also gained Turner a new generation of adoring fans because of what she overcame.

Now, Tina Turner’s new book attempts to focus more on her and not the terror heaped upon her during her 18-year marriage to Ike.

The 320-page hardcover book captures Turner’s vast shoe collection and wigs. It contains quotes from people like Mick Jagger and Oprah Winfrey while chronicling her many collaborations, performances, and what she calls her defining moments.

“I wanted to create an atmosphere of mutual respect. I never dressed to appeal to the men in the audience,” Turner told NBC News this month.

“I wanted to show women that it was possible to look glamorous and exciting without being immodest — that I enjoyed looking good in a way that was joyous and celebrated my femininity without exploiting it.”

She continued:
“I often had three generations of fans at my concerts: grandmothers, mothers and fathers, teenagers and children. I wanted everyone to feel comfortable because it was all about having a good time together.”