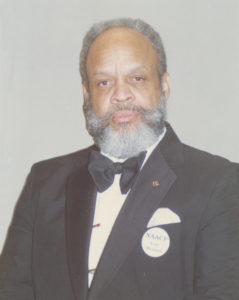 Dr. John Marshall Kilimanjaro (né Stevenson), Sr., professor, civil rights activist, trailblazing newspaper founder and publisher passed away on Wednesday, March 27, 2019 at Hospice of the Piedmont in High Point, N.C. John was born on June 6, 1930 in Little Rock, Arkansas to the late Isabell Lawson Broy Stevenson, a Registered Nurse and the late Arthur Leonard Stevenson, a Pullman Porter. He was the youngest of three children.

John’s mother, Isabell, died when he was 5-years-old. He was placed at Sager Brown Orphanage in Baldwin, Louisiana, where he continued to hone his piano skills. He was raised by his aunts of blessed memory: Ruth Stevenson Lundy, Beatrice Broy Josey and Sarilda Phillips.

John graduated from Rust College Preparatory School in Holly Springs, Mississippi. He began his college education at Tougaloo College in Tougaloo, Mississippi; while there, he was a charter member of the Rho Epsilon Chapter (1948) of Omega Psi Phi Fraternity, Incorporated.

He proudly served in the United States Marine Corps in Europe and the United States Navy as a Naval Hospital Corpsman during the Korean War. While stationed at Balboa Naval Hospital in San Diego as a hospital corpsman, John discovered that he had a penchant for writing eloquent replies to young ladies who penned “Dear John” letters to boyfriends and husbands serving in the Navy. He became the “scribe” on behalf of many sailors and as a thank you for his prose and rescuing relationships, his fellow sailors would leave cases of candy bars and soft drinks on his bunk. John completed his military service and was honorably discharged.

In 1955, Dr. John Marshall Kilimanjaro came to Greensboro, as a “junior instructor” in the Department of English of North Carolina Agricultural & Technical College. Soon after arriving, John joined Temple Emanuel. He married Vickie Kilimanjaro on August 25, 1956 at the Temple located on Greene Street. Rabbi Fred Rypins officiated the service. John served faithfully as a religious school instructor for high school students. He also served as vice president of Temple Brotherhood and volunteered with a host of Brotherhood activities.

Throughout his life, John was always cognizant of the social injustices and the tough economic plight faced by African Americans. In 1958, John was tapped by the late Dr. Edwin Edmonds, who was chairman of the Division of Social Sciences at Bennett College and with the Wesley Foundation at A&T, to become the secretary of the Greensboro NAACP. Today, he is a double life member.

In 1958, Dr. Edmonds, a former classmate with Dr. Martin Luther King Jr.’s at Boston University, convinced King to give a speech in Greensboro. Kilimanjaro along with several other Greensboro notables helped arrange the gathering, which was held at Pfeiffer Chapel on the campus of Bennett College.

It was during this portentous meeting that John, encouraged by Dr. King, promised to take an active part in the struggle for civil and equal rights and make an enduring contribution that would benefit his community and enhance the lives of the people of Greensboro. The realization and continuing manifestation of this pledge is the weekly newspaper, Carolina Peacemaker.

Another defining moment in John’s social activism and civil disobedience came on June 6, 1963, when he was arrested, on his birthday, with colleague and A&T Assistant Professor of Sociology, Donald P. Addison, and hundreds of A&T students as they sat down in the middle of the intersection at Market and Elm Streets in downtown Greensboro. He felt an obligation to protest alongside the students against the racial injustices occurring within the city. Greensboro Daily News photographer, Roy Matherly was on the scene that day and snapped a photograph of the crowd that was published on the front page of the Greensboro Daily News’ June 7, 1963 edition. John is the only identifiable person in this photo, which today is displayed on February One Place at the International Civil Rights Center and Museum in downtown Greensboro.

On August 28, 1963, John and Vickie braved the late summer heat to participate in the historic March on Washington and sat cooling their feet in the reflecting pool before the Lincoln Memorial as they listened intently to the inspiring words of Dr. King’s “I Have a Dream” speech.

John has always had a deep love for teaching and enlightening college students. In 1965, John was elected president of the National Association of Dramatic and Speech Arts (NADSA), which is comprised of speech and theatre arts departments on Black college and university campuses.

In 1969, he established the Speech and Theatre Arts Department at North Carolina A&T State University. By 1970, he founded the Paul Robeson Theatre, built on the A&T campus and served as the executive director of the theatre and the Richard B. Harrison Players from 1970 to 1981. As the senior director of theatre arts at A&T, John produced more than 80 major plays and musicals over his 22-year tenure of service to the university. In 2015, in recognition of John’s tireless efforts and many contributions to the A&T Theatre program, the lobby of the Paul Robeson Theatre was renamed in his honor during the intermission of a special presentation of the show, “Paul Robeson,” by Philip Hayes Dean, starring television and stage actor Avery Brooks.

There are thousands of A&T alumni, and people throughout the Greensboro community and across the United States, who have benefited from John’s lectures and teaching abilities, activism and social conscience. The world is a much better place as a result of the selfless contributions John has made for the betterment of Greensboro and the community at large.

In 1967, John and wife, Vickie, founded the Carolina Peacemaker, which is the longest running weekly newspaper in Greensboro/ Guilford County. John sought to provide a publication that would tell the stories majority media systematically ignored. The paper’s first offices were located on Gorrell Street in Greensboro.

As the publisher and editor of the Peacemaker, John covered the scene of the 1969 A&T/ Dudley High School uprising when National Guard Troops fired upon Scott Residence Hall on A&T’s campus. Although a citywide curfew had been imposed, he was the only African American person permitted by the Greensboro Police Department to be on the streets covering the turmoil as a member of the media.

He also wrote a weekly column, The Other Side of the Tracks and penned ’Ole Nosey. In 1972, John received the O. Henry Award for Artistic Creativity from the Greensboro chamber of Commerce. Under John’s leadership, the Peacemaker has garnered numerous journalism awards from the North Carolina Press Association and the National Newspaper Publishers Association. In 2006, John was selected to be the Samuel E. Cornish Publisher of the Year by the National Newspaper Publishers Association. Fifty-two years after the founding of the Peacemaker, the paper, located at 807 Summit Avenue, continues to publish news on issues and events vital to the African American community.

John was a 2002 recipient of the Order of the Long Leaf Pine by Gov. Mike Easley for his “significant contributions to the state and community through exemplary service and exceptional accomplishments.” He was a proud member of the Tau Omega Chapter of Omega Psi Phi Fraternity, Incorporated, which honored him as Man of the Year and he later received the fraternity’s Founder’s Day Award in 2005.

The Kilimanjaro family extends a heartfelt thank you to all of the caregivers, physicians and nurses who cared for John throughout his battle with Alzheimer’s disease: Drs. Veita Bland, Gerry Plovsky, Saima Athar, Keith Willis. A special thank you to home caregiver James Parker of Greensboro. Thank you to the physicians and nurses at Wesley Long Hospital and to Dr. Amy Baruch, Rodney Brewington, RN and the staff at Hospice of the Piedmont in High Point, N.C. In lieu of flowers, please donate to The John M. Kilimanjaro Endowed Scholarship to support N.C.A&TSU students studying the theatre arts. Send contributions to: The John M. Kilimanjaro Scholarship, c/o North Carolina A&T State University, Office of Development, 1601 E. Market St., Greensboro, N.C. 27411.