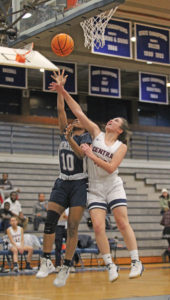 The Grimsley Whirlies defeated the High Point Central Bison boys Friday night (Jan. 17) by a score of 69-55 in a Metro 4-A Conference match up. Grimsley was led by senior Ahmil Flowers with 14 points and Jayden Watlington added 12 points. They improved to 13-12 overall, 5-3 conference. Tre Hill led Central with 11 points as the Bison fell to 6-16 overall, 0-8 Metro. The Whirlies started fast and led 23-7 early in the second quarter before the Bison narrowed the score 37-23 at half time. Starting the fourth quarter, the Bison trailed by 23 (53-30).

The Grimsley girls’ varsity basketball team won its home Metro 4-A Conference game against High Point Central by a score of 71-31. Grimsley led at the half 39-19 and the Bison never got closer that 19 points again. They’re 5-11, 1-1 Metro while Central remains winless with a record of 0-16, 0-8.