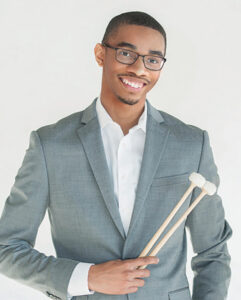 Just a few years ago, Trinity, North Carolina-based musician Chris Thompson was having a hard time finding his passion.

Attending N.C. A&T State University, his grades began to slip, and he wasn’t on track to graduate. But then, a mentor stepped in and showed him the power of having a vision.
The mentor told him to not just have a vision, but to try and see the bigger picture. Because of that, Thompson was able to turn things around, and he says that was a turning point in his life.

“I was able to say, ‘You know what? I can make more of a difference than what I am doing,” Thompson explains.

That was when he realized he wanted to use his gift in music as a way to return the favor and help others find their vision.

Thompson has been a classical percussionist for almost his whole life, and he was the captain of the drumline at both Grimsley High School and NC A&T State University.
Today, Thompson serves as the director of percussion studies at High Point University. He’s also the assistant director of bands for the Marching Panthers and director of the HPU Panther Pulse Drumline, in addition, he serves as an assistant conductor of the wind ensemble.

And now, he’s giving back in a new way: music desegregation.

Thompson recently met his Kickstarter goal of $20,000 for his music desegregation project—which consists of a visual album with eight new songs coming out summer of 2021. Each song will combine genres in unique ways—like rapping with two pianos playing the second Rachmaninoff piano concerto, or a Buddy Bolden New Orleans-style jazz piece that has lyrics rapping in the style of an instrumental solo.

“Through all of this, the lyrics will be uplifting, encouraging, but powerful as I will tackle social justice, Black history, faith, and following your dreams,” Thompson says. “My hope is that by blending these genres in an authentic way, I can create exposure to under-served communities, encouraging more youth to get involved with different styles of instruments and music.”
The idea for the album started when Thompson took a marimba to an all-Black Church and many attendees were unfamiliar with the instrument.

“It was something that a lot of folks weren’t exposed to,” he explains. “I feel like our music today is too segregated and too boxed in by genre. You have all these different genres and at the end of the day, as Duke Ellington said, ‘There are only two kinds of music, good music or bad music.’”

This church visit was years before his music desegregation idea came to fruition, but he did start Motivational Art, Performance, and Sound (M.A.P.S.)—an organization that teaches vision and purpose building through an inspirational performance of the arts—because of it.

With M.A.P.S., Thompson started taking unique classical percussion instruments to schools and churches to talk about vision and purpose.

But then the pandemic hit, and he had to stop his in-person school visits and figure out another way to make a difference.

“I kind of had to do some self-reflection,” Thompson explains. “What am I good at? And what issues and problems do I see in music? And that’s where the whole idea of music desegregation came from. I wanted to find a way to inspire people and motivate people, so I started writing this music that blended all my influences—classical, jazz, and hip hop.”

Now, Thompson is setting out to find an authentic way to merge these styles and provide exposure to different types of music. “The idea is that this album provides a different vehicle, a different vessel to be able to get a powerful message across,” Thompson adds.

Another reason he wanted to start this project was George Floyd and the social justice movement that followed his murder.

“At that time period, I was able to see what happened and I realized I’ve got to have some kind of voice,” Thompson says. “I want to be able to have some kind of vocal impact on the situation.
Musical desegregation comes from an idea of genre and styles of music, but it is also connected to culture because of the musical cultures or the music itself; these genres are so intertwined with a culture that when you desegregate music, you are desegregating cultures and people.”

Many of the messages in Thompson’s music will focus on Black history, and he says it’s important to shine a light on the history of Black figures and icons that are not talked about as much.
Thompson will use the entire summer to complete the album, and he says most of the music is already written.

“When you bring those different genres together, you’re also going to bring different people together,” Thompson explains. “You get to expose people to different things. My hope is to captivate attention, and that’s where the inspiration or motivation will come in.”