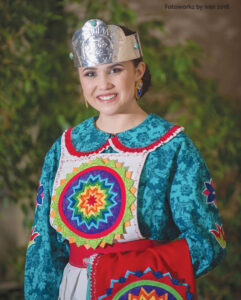 Raven is the 19-year-old daughter of Steve Stanley and Nora Dial-Stanley of Kernersville and the granddaughter of the Sara Locklear and late CB Locklear Jr and of Maxton, Macie Lewis and the late George Lewis of High Point, NC. She has a twin brother, Ryan.

Raven is a sophomore at the University of NC at Greensboro where she is majoring in Consumer Apparel and Retail Studies. She grew up in Kernersville but has always maintained close ties with her maternal family in Pembroke and Maxton. Throughout her life she has been involved in her native heritage. She has been a member of the One Spirit Cultural Class and Dance Team where she along with her family have traveled across the state sharing her culture. She was the Co-Chair of the One Spirit Youth Council where she was a representative with the North Carolina Native American Youth Organization (NCNAYO) and later crowned as Miss NCNAYO. During high school, she graduated with honors and was selected as Kernersville Miss 4th of July. As a representative of One Spirit Youth Council, she attended the United National Indian Tribal Youth Conference and the White House Tribal Youth Gathering in Washington DC with guest speaker Michelle Obama.

As a freshman at UNCG, she made Dean’s List, served as the president of the Native American Student Association, chairperson of the UNCG Pow-Wow Committee, and president and founding class of Alpha Pi Omega Sorority, Inc., the nation’s first and oldest Native American Greek letter organization. In June she was selected by United National Indian Tribal Youth organization to attend the Today’s Native Leaders’ Conference in Alaska where she proposed a project to increase Native American college student retention rates. Later, out of several hundred proposals, Raven’s project was selected as one of the top 10 in the country to present at the Today’s Native Leaders National Summit in Colorado. She is a recipient of the Catching the Dream Scholarship. She represented UNCG in the first University Network of Native Leaders at UNCG. She has also received numerous awards for her beadwork from the Annual NC Indian Unity Conference.

“As traditional matriarchal societies, our culture did not encourage the ways in which today’s women are treated or pushed to such lengths to simply be seen or heard. Our women were valued, loved, respected, cared for. Our women are our givers of life and without our woman life is not given. Our women were clan mothers, leaders. Our women had a voice, a say. Our women had power. It is this power, this voice, this love, this respect that we are seeking to regain.

“Today’s woman, particularly today’s Native American woman, face a bleak world when it comes to our existence. Native American women across that nation are raped, sexually assaulted and kidnapped at rates that are shockingly higher than other women. We face a plethora of issues that have sought to dissipate our power and our strength. But one things remain true, we are still here.

“In our Native communities, in our homes, it is often our grandmothers, our mothers and our aunts that are the glue that hold us together. The power of our Native women emanates through their daily contributions,” said Dial-Stanley.