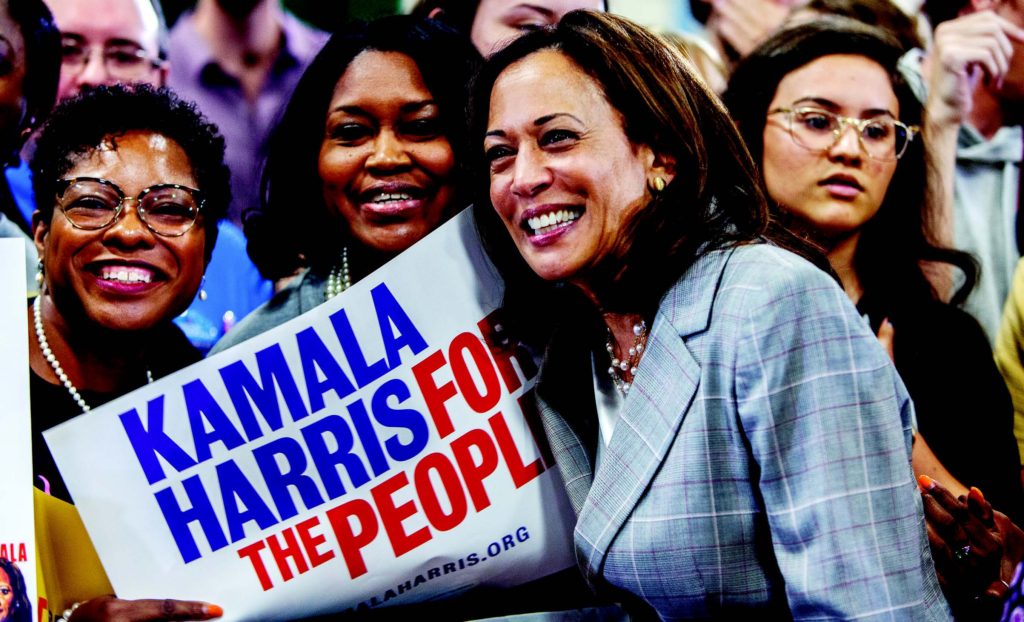 Several hundred people filled the gym at Smith High School on Sunday afternoon to bear witness on what would be Presidential Candidate and U.S. Senator Kamala Harris’ first appearance in Greensboro for her “We the People” rally.

Residents of all ages, ethnicities, sexual orientation, race and Pan-Hellenic chapters stood shoulder to shoulder in anticipation of seeing what many hope will be the United States’ first female president.

One thing was for sure. She had the support of many local Triad Democratic leaders behind her.

“She’s a wise woman and the work she’s done can speak for her,” said Greensboro City Councilwoman Yvonne Johnson. “She is a wonderful human being. She will focus on things that we need to be focused on like getting people out of poverty, immigration reform that is humane, universal health care that we need so bad in this country and chipping away at racism which has taken over and become a cancer in this country.”

“She is a voice that will speak up and ensure that no one is left behind. She will ensure that the issues and challenges that are true to each and everyone of us as Americans will be discussed and that they will be dealt with,” he told a cheering crowd.

The California Senator and former Attorney General is a candidate for the Democratic nomination for President of the United States in the 2020 election. A political standout in the polls and debates early on, Harris lost some steam after the second round of debates but has qualified to be a contender on the debate stage on September 12-13. Currently, Harris is fourth in the polls trailing behind Sen. Elizabeth Warren, Sen. Bernie Sanders and Former Vice President Joe Biden, according to the New York Times.

In 2010, Harris won the election as California’s Attorney General in 2010 and was reelected in 2014. In the November 2016 Senate election, she became California’s third female U.S. Senator, beating out Loretta Sanchez for the seat held by outgoing Senator Barbara Boxer. Since her time in office, she has supported single-payer healthcare, the decriminalization of marijuana, sanctuary cities, lowering taxes for the middle and working class, the DREAM Act and raising taxes on America’s wealthiest individuals and corporations.

In her speech to the crowd, Harris questioned Trump’s intention to “Make America Great Again”, trade policy by tweet which she said hurts Americans and their families, and tax cuts for the wealthy.

Harris told the crowd it is time to turn the page and “successfully prosecute the case of four more years of Donald Trump.” His rap sheet includes the recent mass shootings in El Paso, Texas and Dayton, Ohio.

“He said he was going to take care of the safety of our people but instead he cowers under the safety of the NRA,” she said. “People in the press have been asking me, ‘So do you think he’s responsible for what happened in El Paso?’ Here’s what I said. ‘Of course, he didn’t pull the trigger, but he’s certainly been tweeting out the ammunition.’”

For Harris, there is only one answer to make America great again.

“The bottom line is this – Dude’s gotta go,” she said to a crowd that erupted into cheers. “One of our greatest strengths about who we are as a nation is that despite what we’re going through we’re aspirational.”