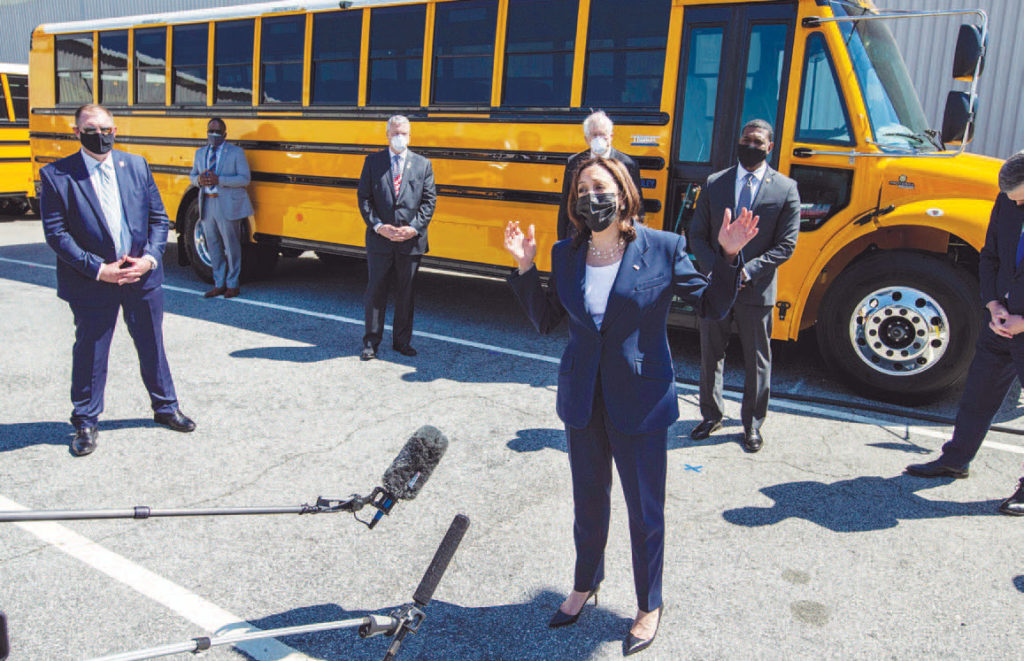 Flanked by secret service and armed guards, United States Vice President Kamala Harris descended the stairs from Air Force 2 at the special terminal of the Piedmont Triad Airport on the morning of April 19.

She arrived around 10:35 a.m. and was greeted on the airport tarmac by Congresswoman Kathy Manning (NC-6), U.S. Environmental Protection Agency Administrator Michael Reagan and N.C. Gov. Roy Cooper, who accompanied her on a daylong tour of the area. Greensboro was just one stop on the Vice President’s cross-country tour to discuss the President’s American Jobs Act.

Harris’ first stop was at the Center for Advanced Manufacturing at Guilford Technical Community College in Jamestown where she addressed a small audience of about 40 people comprised of local and statewide elected officials, students and college leaders.

She spoke for about 20 minutes, highlighting what she and President Biden have accomplished in the first 90 days in office, why the plan is critical to creating an economy that works for all Americans, and laid out a vision for how the plan invests in creating good jobs. She also referenced clean water infrastructure and investments into high-speed broadband coverage.

Congresswoman Alma Adams (NC-12) applauded the plan and said that good paying jobs are something that will boost the state’s economy.

“A once-in-a-century crisis calls for once-in-a-century ideas, and that’s what Vice President Harris spoke about today,” said Congresswoman Adams. “However, the Vice President talked about something more fundamental than that – she talked about the importance of a good job. I agree with her – one good job should be enough. The American people deserve the freedom of a good job that gives them the chance to build the life they want. We can’t go back to the way things were before – we have to make sure that we’re not only creating jobs, but creating good jobs that pay fair wages. This plan does that.”

Harris also participated in a walking tour of the Thomas Built Buses (TBB) manufacturing plant in High Point, to drive the message that the American Jobs Plan (AJP) would provide $20 billion to electrify school buses, creating well-paying jobs like the ones at the plant.

Thomas Built Buses was founded in 1972 and has recently shifted to emphasizing buses that operate on alternative fuel sources. According to the White House, the $2.3 trillion American Jobs Plan invests $174 billion to create well-paying jobs electrifying vehicles and invests $20 billion in electric school buses, to put the nation on a path to 100 percent electric school buses.

When she served as a senator, Harris introduced the Clean School Bus Act to assist school districts in replacing diesel school buses with electric buses.

Harris noted that her trip to Greensboro wouldn’t have been complete without a visit to The International Civil Rights Center & Museum. She made that her third and final tour stop and took time to sit and reflect at the F.W. Woolworth lunch counter– in the exact spot Rosa Parks sat in when she visited years ago.