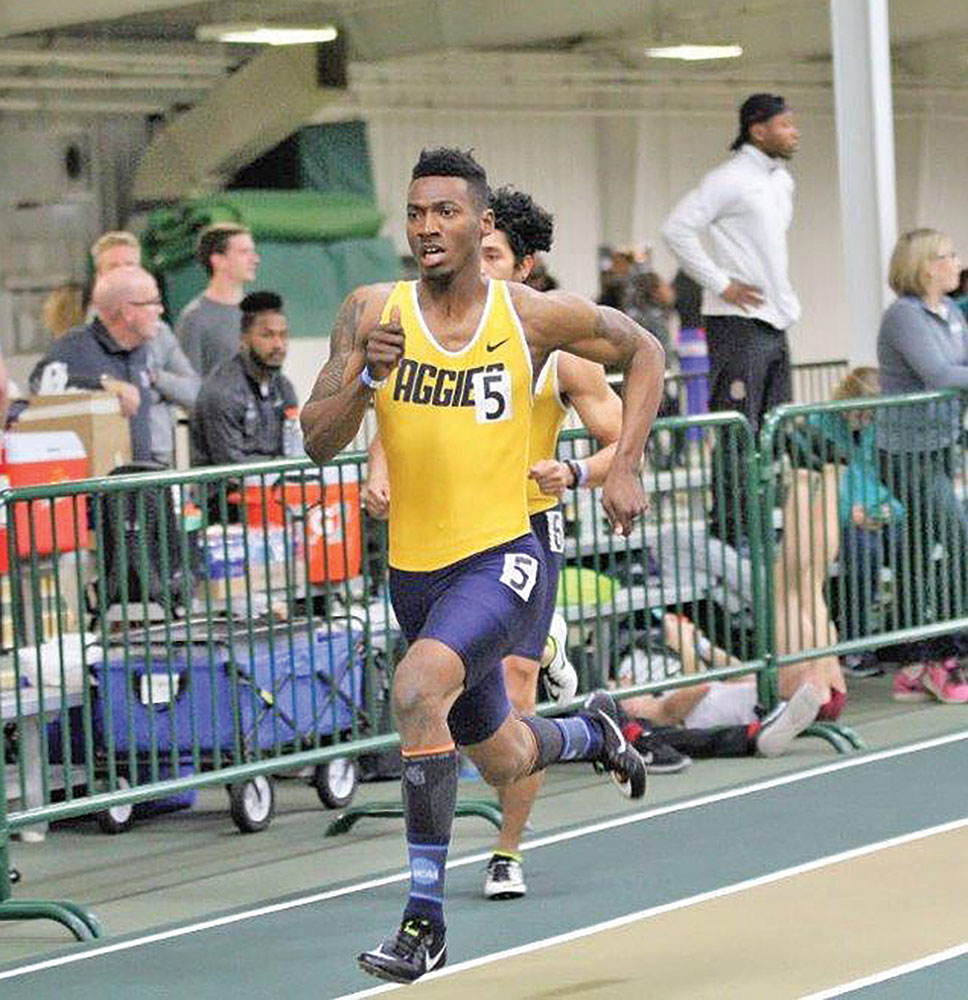 The Aggies’ Dajuan Harding set a new JDL 400m record with a time of 47.11 seconds Friday at the Camel City Invitational in Winston Salem. Photo courtesy of Micheal Simmons.

WINSTON-SALEM -The men’s distance medley relay team broke the North Carolina A&T men’s indoor track and field record and moved to No. 1 in the MEAC with a solid performance at the Camel city Invitational. N.C. A&T took first place in the 400 meters and the 60-meter hurdles. The Aggies also had 14 top-10 performances and 10 personal records.

N.C. A&T’s distance medley relay (DMR) team of senior Corey Aiken, freshman Alan Johnson, senior Steve Stowe and sophomore Marquise McGee ran a 10:17.25 last weekend to move to No. 1 in the MEAC and 59th in the nation. Senior Dajuan Harding powered through for his second consecutive 400m title with a personal-record 47.14. Harding is No. 32 on the national list and No. 2 in the conference. He won the Liberty Kickoff last week with a time of 47.77.

Joining Harding in the 400m was Justin Hamilton (49.24). He placed fifth and is No. 11 in the conference. A&T junior Michael Dickson won his second straight 60m hurdles title with a time of 7.93 sec. to follow up on his 7.81 first-place run at the Liberty Kickoff. Senior Todd Townsend took third at 8.06 and Robert Miller placed seventh at 8.26.

“Michael is one race away from national prominence,” Ross said. “He’s hurdling better than he ever has. Today, he hit a few hurdles that affected his timing. Once he catches his rhythm, he’s going to run extremely fast.”

N.C. A&T took third and fifth in the 60m with sophomore Jaylan Mitchell running a 6.73 and senior Joel Thomas posting a 6.74. Junior Derrick Wheeler shined for the Aggies in the field events. Wheeler threw a personal-record 46-feet, 2-inches in the weight throw and in the shot put he reached 49-feet, ¾ inches to finish fifth and 11th in the events respectively. Freshman Aaron Wilkerson placed eighth in the shot put, tossing the shot put 49-feet, 5 ½ inches. His personal-record 46-feet, 2-inch mark in the weight throw earned him 16th place.