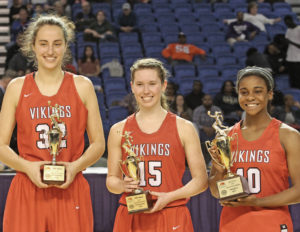 The defending HAECO champion Ragsdale Tigers were upset by the Northwest Guilford Vikings by a scores of 52-30. The Vikings won five of the last six tournament titles. After a close first half, Northwest led 25-20. Ragsdale was outscored 26-10 over the second half.

Diamond Monroe paced the Tigers with 16 points and six rebounds.