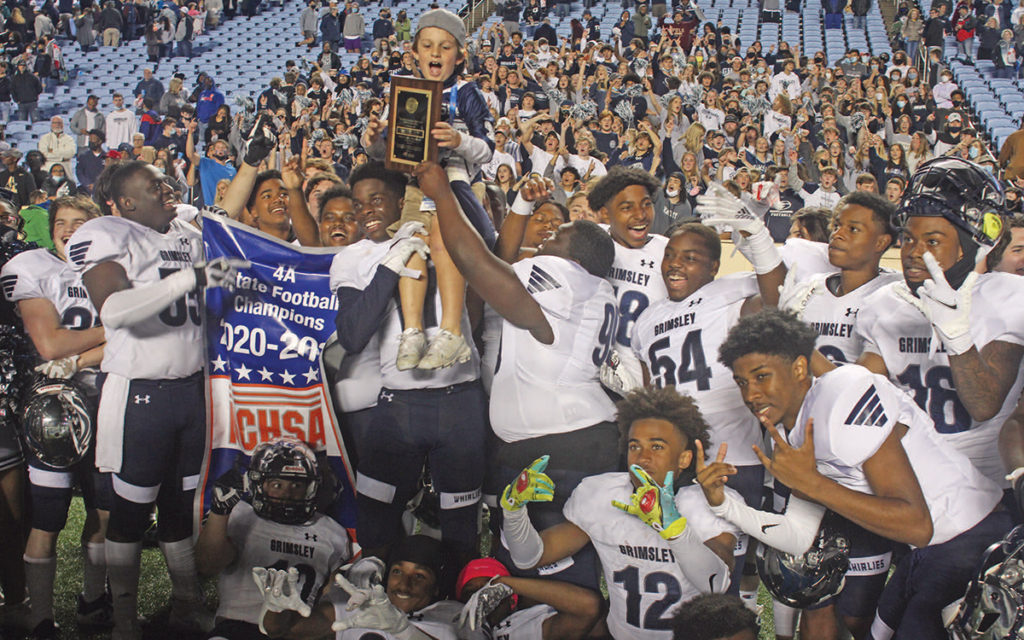 Members of the Grimsley Whirlies’ football team and the team’s ball boy celebrate their 4-A state football championship. Photo by Joe Daniels/Carolina Peacemaker

CHAPEL HILL – In the waning moments of Grimsley’s 28-8 victory over Cardinal Gibbons last Friday in the 4-A state title game, senior linebacker Sincere Burnette could be seen parading around the Whirlies’ sideline with a replica WWE wrestling belt draped over his shoulder.

The pride on his face was undeniable and the Ric Flair symbolism was a fitting nod to the wild journey that led up to that moment.

Despite so much uncertainty surrounding this unprecedented football season, the Whirlies overcame all odds and emerged as the last team standing.

“The funny story is that I bought this belt last year hoping that I’d get to wear it after a state title,” said Burnette, who was a starter on the 2019 Whirlies’ team that lost by one point to East Forsyth in the state semifinals. “It’s been sitting in my closet for a year but now it’s time to bring it out.”

With the victory, Grimsley finished the spring with a perfect 10-0 record and earned its first state football title since 1960 – back when it was still known as Greensboro High School.

The Crusaders, who ended their season at 9-1, were held to under 21 points for the first time all year.

Aside from one botched coverage in the Grimsley secondary late in the fourth quarter that led to a 41-yard touchdown pass, the Crusaders found that making splash yards through the air was a nearly impossible task.

“Our defense has stayed composed all year and we haven’t really given up many points,” said Burnette who finished with five tackles and had a pass break up. “I think our average is somewhere around eight [points per game] and tonight all we ended up allowing was eight. Then our offense came together and put points on the board, so this really was a complete team win.”

For the second week in a row, Grimsley junior quarterback Alonza Barnett III found himself under heavy pressure early on and struggled at times throwing the football.
However, as it’s been the case all season, he would eventually fight through that adversity and made enough timely plays to help this team secure the victory.

Barnett would finish with 117 yards of combined offense, scoring both a rushing and passing touchdown in the first half to earn offensive MVP honors.

After losing a fumble deep in Cardinal Gibbons territory on Grimsley’s opening drive, Barnett quickly atoned for that miscue on his next possession when he scampered in the end zone on fourth and two from the five-yard line.

That drive began on the Crusader’s 26 and was set up by a quick three and out by the Whirlies’ defense and then an errant snap on the ensuing punt attempt.
Down 7-0, Cardinal Gibbons tried to respond by revving up the pressure from their defensive line.

After the Whirlies were pinned back to their goal line thanks to a 49-yard punt, Barnett was called for intentional grounding in the end zone on third and long – a penalty that resulted in a safety for Cardinal Gibbons.

That made the score 7-2, but it also appeared to light a fire under the Whirlies’ defense.

On the ensuing drive, Grimsley would stuff Cardinal Gibbons’ running back Donovan Shepard behind the line of scrimmage on fourth and two to force a turnover on downs.
Then, right before the half, senior linebacker Nate Crawford intercepted a Clark pass over the middle and returned it to the Crusaders’ 24.

Two plays later, Barnett would connect with senior tight end Lawson Albright in the end zone on a back-shoulder throw for an 11-yard TD.

That made the score 14-2 at halftime and based on how the Whirlies’ defensive was flying around, the lead felt almost insurmountable.

It was the ninth time this year that Grimsley had led at the break, with their only halftime deficit being 14-7 last week against Matthews Butler.

In the second half, the Whirlies turned to junior running back Jeiel Melton, who finished with 116 yards rushing on 17 carries and a touchdown.

“We knew that their D-line and inside linebackers were pretty solid but we felt that if we could get outside we could get it going,” said Melton.

After losing a fumble near midfield on the Whirlies’ second drive of the third quarter, Melton began to break off long runs against in the Crusaders’ defense – which was gradually looking worn down.

On the next Whirlies’ possession, Melton carried the ball four times for 47 yards and helped increase the lead to 21-2 with a nine-yard touchdown run.

“My teammates came over to me and told me to just keep my head up,“ explained Melton about how he was able to bounce back from the fumble. “They had my back so I knew I had to have theirs.”

At that point, the Crusaders found themselves in desperation mode, having to attempt a late comeback by throwing on nearly every down. That strategy resulted in two more turnovers including a 38-yard pick six by Caleb Curtain for Grimsley’s final score.

“We felt like the coaches had a really good game plan coming in tonight and we just knew we weren’t going to lose,“ said Burnette. “We had that confidence in each other and we were determined to stay unbeaten all year. It’s been amazing.”

Last fall during the height of the COVID pandemic, Burnette was one of strongest advocates for allowing high school athletes a chance to play this season. He gave a number of impassioned interviews in the local media and even led a rally at the Guilford County school board headquarters with other Grimsley students and parents.

He fully understood the challenges and risks involved but felt that having a chance to play his final football season as a Grimsley senior was something worth fighting for.

Now, the next time he runs out on a football field, he’ll be wearing the blue and gold colors of North Carolina A&T State University. Burnette, who received a preferred walk-on offer by his hometown Aggies in February, said this game provided a sneak preview of what A&T fans can expect upon his arrival.