Grimsley routs East Forsyth in opening round of 4A playoffs 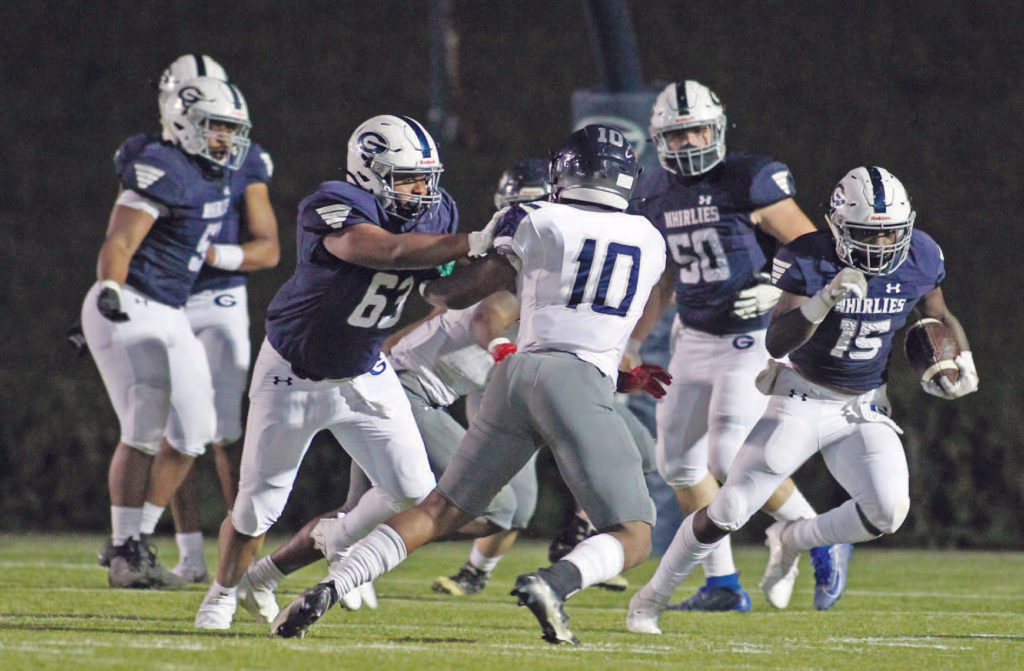 What had been a tense battle the entire first half quickly morphed into a rout after the break, as Grimsley came out in the third quarter and converted three straight turnovers into touchdowns to pull away from East Forsyth, 27-13, in the opening round of the 4A state playoffs on April 16.

The victory improved the Whirlies’ undefeated record to 7-0 this spring and may eventually be viewed as a transition in power in local high school football. 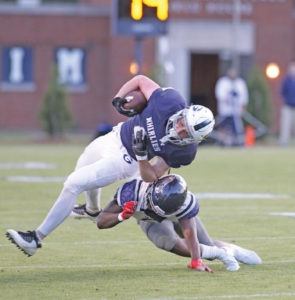 The Whirlies’ TE Lawson Albright is upended by
the Eagles’ R.J. Brown during first quarter play
of an NCHSAA playoff game. Photo by Joe Daniels/Carolina Peacemaker.

“We didn’t show up tonight expecting to win 50 to nothing,” said Grimsley head coach Darryl Brown, whose team suffered a heartbreaking 21-20 loss to East Forsyth in the 2019 4A state playoffs. “We knew it was going to be this kind of football game. It always has been when the two of us have played these last few years. So when we came in for halftime and it was 7-3, our guys were locked in and focused. Our kids were looking forward to making plays in the second half and we went out and did it.”

The Whirlies will host the 6-1 Durham Hillside Hornets this Friday at 7:30 p.m.

The Eagles started the second half at midfield after a short kickoff, but then surrendered the ball right back to Grimsley two plays later thanks to a fumbled snap. The Whirlies capitalized on the very next play when junior running back Jeiel Melton took a handoff around the left end and raced down the sideline untouched for a 47-yard touchdown.

Melton would finish with a game-high 146 yards rushing on 26 carries.

“He’s a great running back and that really keeps the defense honest when you can both pass and run the ball as well as we can,” said Grimsley quarterback Alonza Barnett.

The next Eagles’ possession lasted only four plays before Grimsley’s Cam Allison ripped the ball out of the arms of East Forsyth running back Jaquan Porter. That fumble resulted in another Whirlie touchdown six plays later when Barnett scrambled out of trouble and then found receiver Tyson Resper open in the corner of the end zone for a 29-yard score.

On their ensuing drive it appeared that the Eagles had finally begun to settle down, as they embarked on a 10-play drive that gradually moved to ball down to the Grimsley 41yard line. However, disaster would soon strike again, when Whirlie defensive back Caleb Curtain jumped in front of an errant pass and returned the interception 68 yards for a pick six.

“Defensively, coming out and creating the two fumbles to start with were big,” said Brown. “And then we come back, Cam Allison brings pressure off the edge and forces the quarterback to throw early, Caleb Curtain jumps the pass on the sideline and returns it for a touchdown. Those three turnovers were huge, but we kind of ride our defense a lot anyway. I mean, that’s an experienced group for us.”

Leading the way for the Whirlies’ defense was 6’6, 330-pound defensive end Travis Shaw, who created havoc for the Eagles’ offensive line all evening.

Shaw, a consensus five- star recruit has already fielded offers from nearly every college football power in the nation, said it felt great to end the Eagles’ season and finally give them a taste of their own medicine.

“Every year I’ve been here at Grimsley, that team over there has been a great team,” said Shaw, who had a sack and a number of quarterback pressures despite drawing double teams on nearly every snap. “They’ve got some real good football players. Every previous year, I’ve been sent home by those dudes. So this whole week in practice I told my teammates, that we did in the first game didn’t matter. This game we had to come out here and make a statement. We had to let people know that we’re not losing to them this year. We’re not going home. This was a statement game. We listened to the coaches and just came out and executed everything they told us to do.”
Trailing 3-0 late in the second half, the Whirlies drove down deep into Eagles’ territory and decided to set the tone for the rest of the game by displaying some aggressiveness on offense.

Facing 4th and goal from the 10 yard line, the Whirlies chose not to attempt a chip shot field goal, but instead decided to put the ball back in the hands of its top playmaker, Barnett. That faith was rewarded when Barnett found senior wide receiver Anthony Dunkins slashing across the field on a slant route. Dunkins made a diving catch in the end zone to give Grimsley a 7-3 halftime lead.

When asked afterwards about the decision to go for it on fourth down, Brown said it was a testament to the amount of confidence he has in his junior quarterback.
“That’s just not our game,” said Brown about not kicking the field goal. “Jake (Henry) has converted his extra points but we’ve only attempted one field goal all year and we had a bad snap on it. So we will kick it if we feel like we need to, but Alonza Barnett right now is our best player and having the ball in his hands at any time is a good play for us.”

Barnett finished with 11-of-19 passing for 117 yards and two touchdowns.

“He either makes the right read or he creates with his legs and makes a play down the field,” said Brown. “He just has poise. Nothing bothers him. He sees everything. The game looks like it is really slow to him right now.”