Grimsley cruises to 42-7 win in 4A playoffs 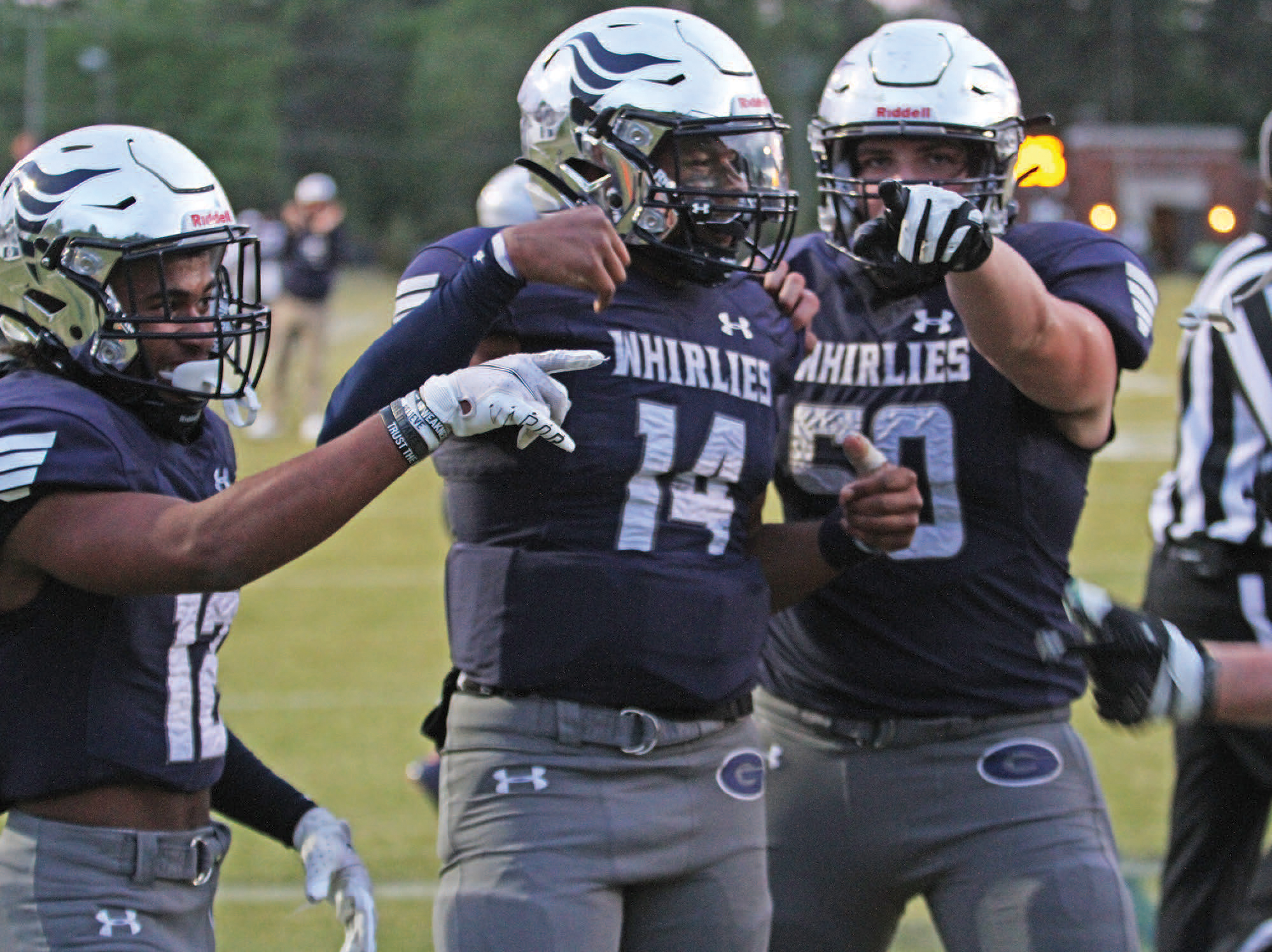 Getting off to a fast start and seizing momentum from your opponent early is a mantra football coaches have been preaching since the beginning of time.

However, seldom has that game plan been executed to the degree Grimsley did last Friday night, when the Whirlies exploded for 21 unanswered points in the first quarter and then cruised to a 42-7 win over Durham Hillside in the second round of the 4-A state playoffs.

In fact, 41 seconds is all it took for the now 8-0 Whirlies to grab their first lead in this contest – and in the process send a clear message to the visiting Hornets that they were in for a rough night.

After Antoine Shaw broke free down the sideline and returned the opening kickoff 61 yards to the Hillside 23 yard line, the Whirlies got on the scoreboard just two plays later when junior quarterback Alonza Barnett found Tyson Resper in the back of the end zone on a 14 yard touchdown pass.

A quick defensive stop led to Grimsley’s next offensive possession – a 10-play, 56-yard scoring drive that was capped by a 12-yard touchdown run by junior running back Jeiel Melton on a beautifully designed draw play. That put Grimsley ahead 14-0, and then five minutes later the deficit would balloon to three scores when the Whirlies forced another Hillside punt and then embarked on a nine-play, 69-yard drive that was culminated by a 14-yard touchdown run by Barnett off a read option.

“The start tonight was huge for us,” said Grimsley head coach Darryl Brown, who is returning to the 4-A semifinal round for the second straight season. “We had the big kickoff return to open the game and in two plays we were in the end zone. Alonza found Tyson in the back of the end zone. And then we got a couple of stops and couple of more scores. It was good to get off to a good start against those guys for sure.”

The Hornets were finally able to get on the board late in the second quarter when quarterback Aden Beatty connected with wide receiver Brandon Turner on a 13-yard touchdown pass to make the score 21-7. However, Beatty was pulled out of the game at halftime after suffering an undisclosed injury and the Hornets were unable to mount any serious offensive threat in the second half with sophomore backup quarterback Wilson Kargbo.

Grimsley will now host 8-1 Matthews Butler this Friday night at Jamesion Stadium, with a trip to the 4A state championship game on the line. The Bulldogs are coming off a dominating 35-0 victory over Charlotte Providence last week and have now outscored their opponents 297- 29 in their last six games. Butler’s only loss this season was a 24-21 defeat to undefeated 4-AA power Charlotte Myers Park.

Yet, don’t expect this Grimsley team to be intimidated by Butler’s impressive resume.

The Whirlies have been shutting down high powered offenses all season, including Hillside who had averaged 43.6 points in their three previous games before facing Grimsley.

“We always want to depend on our defense, said Grimsley senior linebacker Sincere Burnette, who recorded nine total tackles, four tackles for loss and a forced fumble against the Hornets. “We have a great front seven and some great cornerbacks in the backfield who can hold their weight. So we always want to help our offense out and make sure the other team doesn’t put too many points on the board.”

On the offensive side of the ball, Grimsley was again led by their star quarterback Barnett who finished with 212 yards passing and four total touchdowns.

He continued to unveil even more layers of his game, this time showcasing his elite mobility by racking up 61 rushing yards on 11 carries, including a pair of touchdown runs.

“He’s done it all year, said Coach Brown about his team captain. “With the zone-read, option game, when he gets out on the edge and can make moves out there and make people miss and he can run through tackles as well. I think the best thing about him is when he drops back to pass he’s able to read things downfield, find lanes and step up in the pocket – and then pull it and go when he needs to. He’s just really poised back there.”

Barnett said he’s able to remain aggressive even when plays break down because he’s surrounded by so many talented teammates.

“My linemen blocked their butts off,” said Barnett. “I have all the trust and confidence in those guys. Sometimes I need to stick in there more. I get myself in trouble by running outside the pocket, but even when I do I always have to keep my eyes downfield because I know those guys on the outside are great playmakers and they’ll make that catch ten times out of ten.”

Barnett and the Whirlies are aware that they’ll need strong performances in all three phases of the game this Friday against Butler if they hope to have similar success and continue this title run.

And of course, another fast start would be welcomed.

“To jump off 21-0 tonight was huge,” said Barnett. “Next week we’re going to work on keeping our foot on people’s necks. That’s the next progression in our levels of greatness. We still haven’t played our best game yet. You saw a glimpse of that in first quarter. But when we maintain that throughout the whole game next week and weeks after that, that’s when we’ll play our best game.”