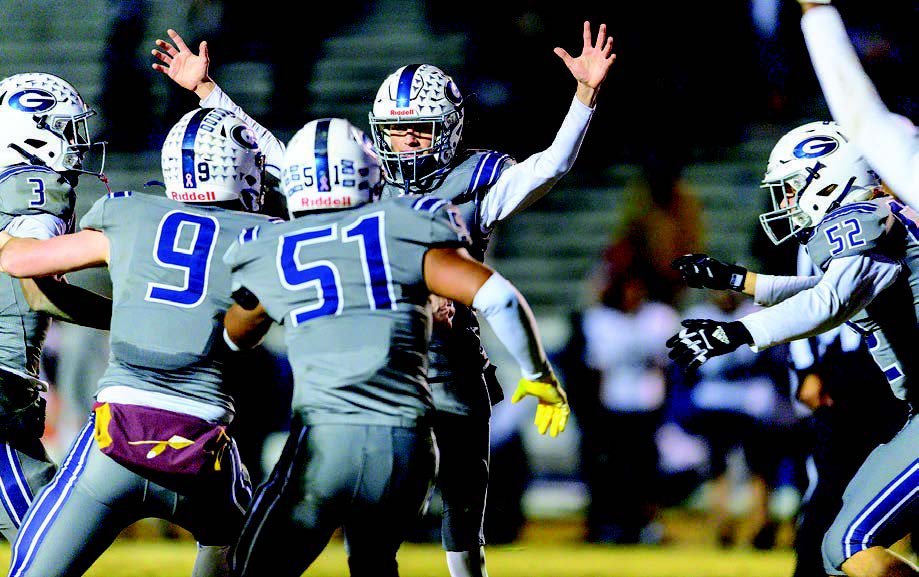 Grimsley football players mob teammate and kicker Jackson Smith after he sends the ball between the uprights for the game winning score against Cornelius Hough. Photo by Kevin L. Dorsey/Carolina Peacemaker. 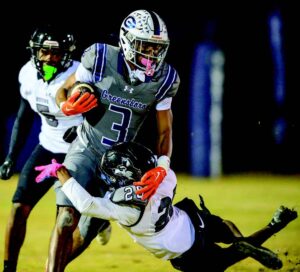 Grimsley’s Alex Taylor runs for a short gain after a pass completion against the Willian Hough Huskies. Photo by Kevin L. Dorsey/Carolina Peacemaker.

he Grimsley Whirlies advanced to the 4-A Regional Semi-Finals with a hard-fought, triple overtime victory over Cornelius Hough, 40-37. With the win, Grimsley will host Weddington (Matthews, N.C.) on Friday, December 2.

The Hough Huskies led Grimsley 9-7 at the half. All the scores were on field goals by Hough’s Nolan Hauser. A Ryan Stephens 19-yard touchdown pass to Alex Taylor lifted the Whirlies to a 15-9 lead. Hough scored to lead 16-15. Grimsley moved 85-yards in three plays. Mitchell Summers’ 67-yard touchdown run put the Whirlies up 23-16. Hough tied the game at 37 before Grimsley’s Jackson Henry kicked a 19-yard winning field goal (40-37).

The Hough Huskies were led by quarterback Tad Hudson who completed 24-of 40 passes for 235-yards and one touchdown. Hough had 360-yards of total offensive to Grimsley’s 307.