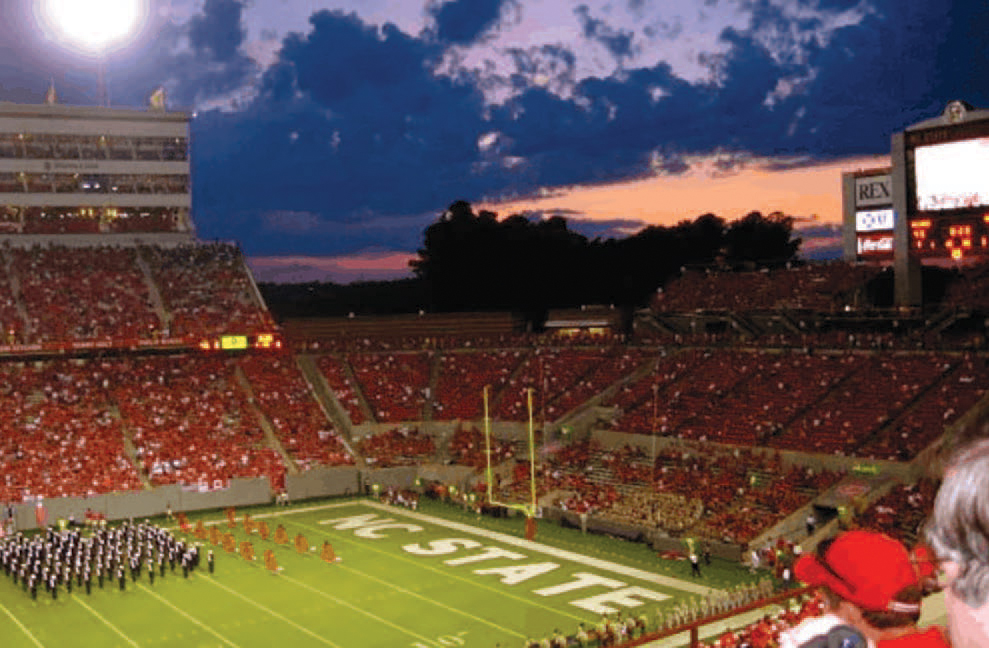 Gov. Cooper’s administration agreed to let the N.C. State football player’s parents attend the game against Wake Forest last weekend at Carter-Finley Stadium as long as face masks were worn and families appropriately distanced themselves from others. The new rule would allow for seven percent of stadium capacity to attend, which in the case of Carter-Finley, would be close to 4,000 spectators.

RALEIGH – Outdoor stadiums and venues with a seating capacity of more than 10,000 will be able to allow some fans back in early October if North Carolina’s COVID-19 trends and metrics remain stable or improve over the next 10 days.

Gov. Roy Cooper made the announcement on Tuesday during a briefing with reporters so sports teams and any concert promoters hoping to bring audiences back would have time to print tickets and set up strict social distancing plans.

The current Safer at Home Phase 2.5 executive order is set to expire Oct. 2.

Cooper already has given school districts the option of fully open elementary schools, allowing classroom instruction for Kindergarteners through fifth graders with face mask requirements and other measures to create barriers to the spread of COVID-19.

“I am pleased to report that North Carolina continues to remain stable in our key metrics,” Cooper said on a day that public health officials reported 1,161 new cases since Monday and a total of 3,286 deaths.

“We want the level of cases to be even lower, which is why safety measures like a mask requirement and social distancing are more important than ever. When we ease restrictions that means our efforts are working, and to ease them more or to prevent us from having to go backward, we need to double down.”

There may be other areas in which restrictions are eased in a new order that takes effect after the Oct. 2 expiration of Safer at Home Phase 2.5, Cooper said, but he did not elaborate further on what those would be.

The announcement about large outdoor venues comes a little less than a week after the parents of Wolfpack football players at N.C. State University petitioned the governor to reconsider the outdoor crowd limitations so they could watch their college students play ACC sports.

The Cooper administration agreed to let the parents attend the game against Wake Forest last weekend at Carter-Finley Stadium as long as face masks were worn and families appropriately distanced themselves from others.

Carter-Finley has a 57,000-seat capacity. With 110 players on the team, families persuaded the public health team and university leaders that they could space out in the stands while watching the game in person. The new rule would allow for seven percent of stadium capacity to attend, which in the case of Carter-Finley, would be close to 4,000 spectators.

The Carolina Panthers announced in a news release after the governor’s briefing that fans will be welcomed back to Bank of America Stadium, an outdoor venue built to seat more than 73,700 football and soccer fans, on Oct. 4 for the football game against the Arizona Cardinals.

Cooper, a sports fan, has spoken often about how much he missed sports when everything shut down in the early months of the pandemic.

On Tuesday, Cooper also announced a $40 million relief plan that could bring some aid to those businesses, as well as to amusement parks, banquet halls, dance halls, indoor movie theaters and museums.

N.C. Mortgage, Utility and Rent Relief, or MURR, a program that will be administered by the state Department of Commerce, can provide up to $20,000 in relief funds for the small businesses that took a deeper pandemic punch than some.

“Small businesses are the backbone of our economy – powering our local communities and giving back in so many ways,” Cooper said. “They deserve our support, and this new initiative can help them weather this tough time. But substantially more help is needed for small businesses and Congress and the president must act as soon as possible.”

Under the new MURR program, small businesses may apply for up to four months of mortgage interest, rent or utility expenses if they were closed between April 1 and July 31.