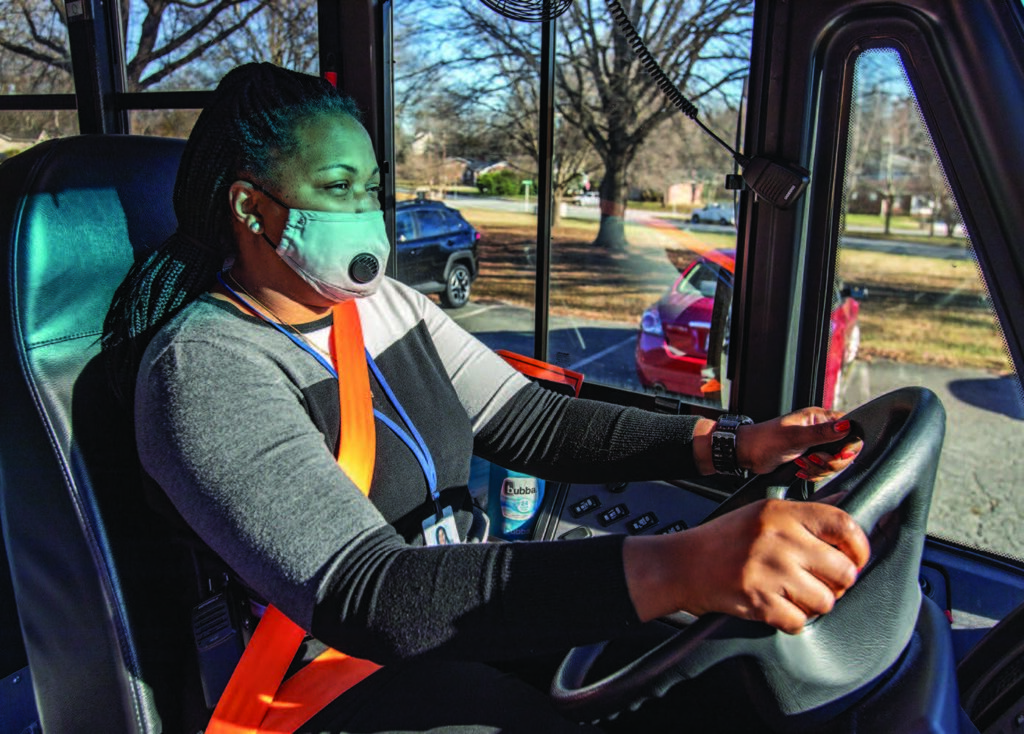 In addition to her duties as principal of Jackson Middle School, KaTrinka Brown, the Piedmont-Triad Region Principal of the Year is licensed to drive the school’s activity bus. Photo by Ivan Saul Cutler/Carolina Peacemaker.

Jackson Middle School principal KaTrinka Brown was stunned when Guilford County School (GCS) district leaders presented her with the Piedmont-Triad Region Principal of the Year award during a surprise ceremony in the school library on June 7.

In October 2021, Brown was named Principal of Year for the district. She is now one of nine finalists for the North Carolina Principal of the Year Award, going up against principals from across the state.

“This is amazing. I am honored to continue to work at this school and I will work here as long as Dr. Contreras gives me the opportunity to do so. I love my students, I love our community, I love my staff. Everyone works extremely hard every day,” Brown said, adding, “All our babies work hard every day. I just want them to be able to know that all their work is not in vain. They can do anything they put their minds to, whatever they aspire to do, and I’m here to be their advocate and I will continue to work hard for them.” 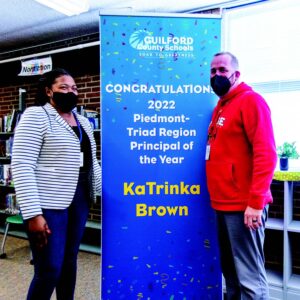 In addition to her duties as principal of Jackson Middle School, KaTrinka Brown, the Piedmont-Triad Region Principal of the Year is licensed to drive the school’s activity bus. Photo by Ivan Saul Cutler/Carolina Peacemaker.

Brown has a B.S. in Electronics and Computer Technology from North Carolina A&T State University; which is also where she attended grad school and received a Master’s in The Art of Teaching, and a Masters in School Administration. Additionally, she received her Education Specialist degree from The University of North Carolina at Greensboro, where she is currently studying for a Doctorate of Education degree.

District leaders say that in the seven years Brown has served as Jackson’s principal, she has made impressive strides in raising the educational outcomes at the low-performing Title I school. When she began as principal the school had a growth index of 9.12. Two years later in the 2016-2017 school year, Jackson reported a positive 5.4 percent growth and was removed from the low-performing schools list.

“This is a very proud day for me,” said GCS Superintendent Dr. Sharon Contreras. “She [KaTrinka Brown] has brought a sense of pride and community to this school, even enrolling her own daughter, Jada, here.”

Under Brown’s leadership, the school now offers advanced math classes, and provides access to college tours and academic competitions. Brown has also enlisted the help of community partners to provide resources and opportunities for her young scholars.

“She has invested in her staff both personally and professionally and they in turn invest in their students, forming a tight knit community of educators focused on continuous improvement. Rather than seeing her role as principal of Jackson Middle as a challenge, Brown sees it as an opportunity to make a difference in the lives of some of the most vulnerable but gifted students in the district. She is an exceptional principal and an equity warrior, and I am proud to serve alongside of her,” said Dr. Contreras.

After more than a decade in the field, Brown said she is able to stay passionate about education when she sees how she is able to make a difference in their scholastic futures.
“All schools aren’t created equal and all access isn’t the same and it makes me want to do more to make sure all students have the same opportunity. For my babies, it’s important that regardless of what struggles they may have in the community, that they leave those barriers at the door and that we open up opportunities so that they can move forward,” said Jackson. “Opportunities that open doors for students, regardless of what they look like or where they come from, is what gives me the drive to continue to do this work every day.”

Jackson staff also says that Brown goes above and beyond for her students, pitching in the classrooms, cafeteria and even driving the activity bus to make sure students have transportation to after-school activities.

“It’s not easy work, but it is rewarding work and I love doing it each and every day and I just want to say thank you to each and every one of you,” said Brown.