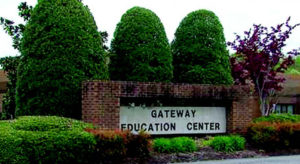 The board was expected to vote on an ordinance to use money from a 2008 general obligation bond, transfers from the general fund and other miscellaneous revenues remaining in existing project ordinances to fund the district’s Career and Technical Education (CTE) program.

However, a few dozen parents and supporters took to the podium before the vote to plead that the commissioners find funds to help keep Gateway Education Center open. The special education school located in East Greensboro serves students with significant disabilities from pre-Kindergarten through age 22.

“I encourage the Board of Commissioners to look for and demand creative funding solutions for students instead of closing schools in East Greensboro,” said Dania Ermentrout, Gateway Education Center PTA president.

District 6 Commissioner Hank Henning made the motion to postpone the vote.

“After hearing all these parents testimony, I can’t vote on 7 million dollars tonight, [not] with all these issues with Gateway that are unanswered,” Henning said.

The motion passed 8 to 1 with Commissioner Justin Conrad voting no.

Gateway parents were notified of the school’s impending closure by phone on Friday, April 12. Guilford County Schools (GCS) Superintendent Sharon Contreras confirmed the news at an April 15 press conference where she gave details on why she was recommending the school for closure. She cited ongoing maintenance issues that included water leaks, windows with broken seals that trapped moisture in between the glass panes, pest control, raw sewage, clogged toilets and a non-functional therapy pool that has allegedly been used to store broken and outdated equipment.

Gateway’s parents also packed the School Board of Education’s April 17 budget meeting in opposition to the closing. Sup. Contreras stated that after hearing from the public, the school would remain open. She noted that Gateway students will have the option to stay at the school and the district will work with parents to determine how to relocate students to other buildings on the campus.

“Closing the school for the beginning of the year doesn’t mean the repairs won’t get made,” said Foster, adding that the alternative choices for students, Herbin-Metz Education Center and Hayes-Inman Education Center, were two state-of-the-art schools offering the same services as Gateway.

The $7.1 million is proposed to be used to create six pilot Signature CTE academies and renovate schools to accommodate the new programs at the Academy at Smith, Kearns Academy, Smith, Northeast, Southeast, and Western High Schools. GCS currently offers 187 CTE courses in 50 schools. Smith High School is estimated to receive the bulk of the funds at $4 million for a new building that will house an advanced manufacturing lab, engineering lab, and classrooms, with the remaining $3 million to be split among the other five schools.

In support of the initiative, state legislators have filed North Carolina HB 275, and Senate Bill 189, a bi-partisan bill to support CTE pilot programs in Guilford County Schools. The bill calls for $3 million to be allocated for the pilot program and offers a tax incentive to businesses that partner with the program. It specifies that a CTE program may operate for up to six school years as a pilot program before the BOE may apply to the State Board of Education to make the program permanent part of the district curriculum. The bill also gives schools the ability to hire and employ adjunct instructors to teach a signature training course.

The GC Commissioners are expected to revisit the issue at the board’s May 16 meeting. In the meantime, commissioners are planning to meet with the school board and GCS officials to explore possible solutions for Gateway.

According to state statutes, in order to close a public school in North Carolina, the law requires a thorough study of a school and the welfare of students affected by the school closing, as well as hold a public hearing.

If the school board then votes to close a school, there is an established process. According to Scott McCully, chief operations officer for GCS, first the property must be made available to the Guilford County Commissioners. Then a market appraisal of the property is completed. If the county is not interested, then charter schools have the opportunity to bid on the property. If there is no interest there, then the school district can put the property on the open market for a private developer.

A January 2019 school facilities report by MGT of America Consulting, LLC recommended that GCS spend $1.5 billion dollars in four phases to remediate aging structures. The facilities report listed the Gateway facility, which was built in 1983, in poor condition and in need of up to $11,229,400 in repairs, but not recommended for closure.

A Joint Planning Facilities Committee was convened of the Board of Commissioners chair, two BOC members, the Board of Education chair and two board of education members, for a total of six members and one alternate for each side. In August 2017, the committee reviewed Request For Qualifications from five companies interested in conducting the study.

McCully said the consulting group was selected based off of what qualifications they have to complete a study of this size, rather than selection based off of cost. He noted that one piece of the study is not complete, which is a digital upload of blueprints and floor plans of each site.

McCully noted that it would probably take another bond to cover all the recommended repairs.

A public hearing on Hampton Elementary School with the Board of Education is scheduled for April 30 at 6 p.m.