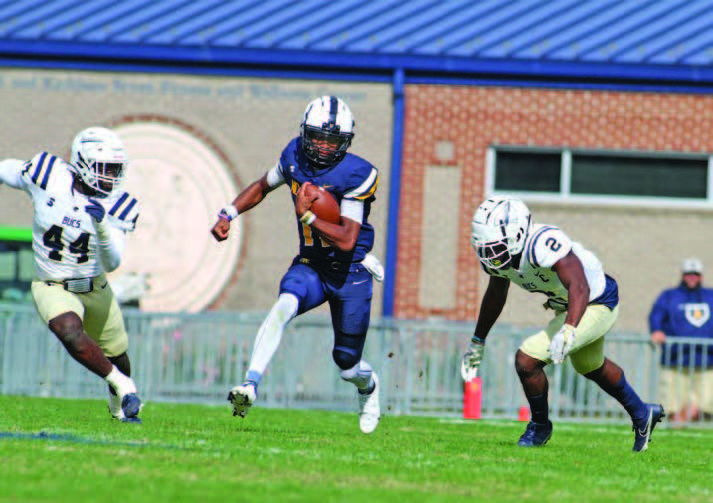 For all intents and purposes, the 2022 FCS playoffs begin this weekend for A&T.

Officially, the Aggies will have their regular season finale at Gardner-Webb on Saturday at 12 p.m., but the outcome of that contest will determine the Big South Conference champion and who gets the league’s coveted automatic bid to the playoffs.

Both schools are currently tied atop the Big South standings at 4-0, and since neither has a high enough RPI ranking to warrant an at-large bid, this game will surely feature a winner-take-all scenario.

“This is a ballgame that has been circled on my calendar since last year,” said A&T head coach Sam Washington, who will be looking to capture the 17th conference championship in program history. “I am so excited to go down there and get it on. We’re going to take our best down there and we’re going to play their best, and we’ll let the chips fall where they may.”

The full 24-team playoff bracket will be announced on Sunday, Nov. 20.

A year ago, A&T saw its 2021 season come to a disappointing end at the hands of Gardner-Webb, as the visiting Running Bulldogs scored 28 points in the fourth quarter and left Truist Stadium with a 35-27 victory.

That loss gave the Aggies their first losing season since 2011, also marking the first time since 2014 that A&T was held out of the postseason.

Not surprisingly, the memory of that stinging defeat is something the Aggies will be looking to avoid this time around.

“I think it’s going to be very easy to motivate our team this week,” said Washington. “They’re self-motivated. They know what’s on the line. They know the magnitude of this ballgame and they know the character of the team they’re getting ready to play. They beat us last year. None of that has been forgotten and we look forward to the opportunity to play them for a championship.”

Gardner-Webb enters this year’s matchup at 5-5, but they have won three in a row.

The Bulldogs are led by senior quarterback Bailey Fisher, a 5’11 dynamo who is averaging 248.1 passing yards per game and has thrown 14 touchdowns.

Against Campbell last week, Fisher completed 30-of-38 passes for 366 yards and three touchdowns and ran for 48 yards and a score. In that contest, Gardner-Webb amassed 583 yards of offense and 33 first downs.

However, no team in the Big South has been hotter than the Aggies, who have now won seven straight games after beginning the season 0-3.

Sophomore running back Bhayshul Tuten recorded his ninth straight game of rushing for at least 100 yards – posting 106 yards on the ground Saturday, including a 2-yard touchdown run. In addition, he also caught four passes for a team-best 78 receiving yards against Gardner-Webb, including an 8-yard touchdown.

“I think we’re ready and motivated for the game on Saturday,” said Tuten, who leads the Big South with 1,255 rushing yards. “Ain’t too much left to do but go out and practice hard this week and finish strong. I’m not nervous. That’s all I’m going to say.”

One of the main question marks for A&T on Saturday will be the health of graduate quarterback Jalen Fowler. He did not start against Charleston Southern last weekend but entered midway through the first quarter and finished with 158 yards passing, one touchdown and two interceptions.

Afterwards, Washington explained that Fowler was dealing with a foot injury but expected him to be ready to go against Gardner-Webb.

“I think now he’s good,” said Washington. “It’s more of pain tolerance and psychological; how much pain can he bear. But it’s not overwhelming. He feels very confident that he will be at his best and so do we.”