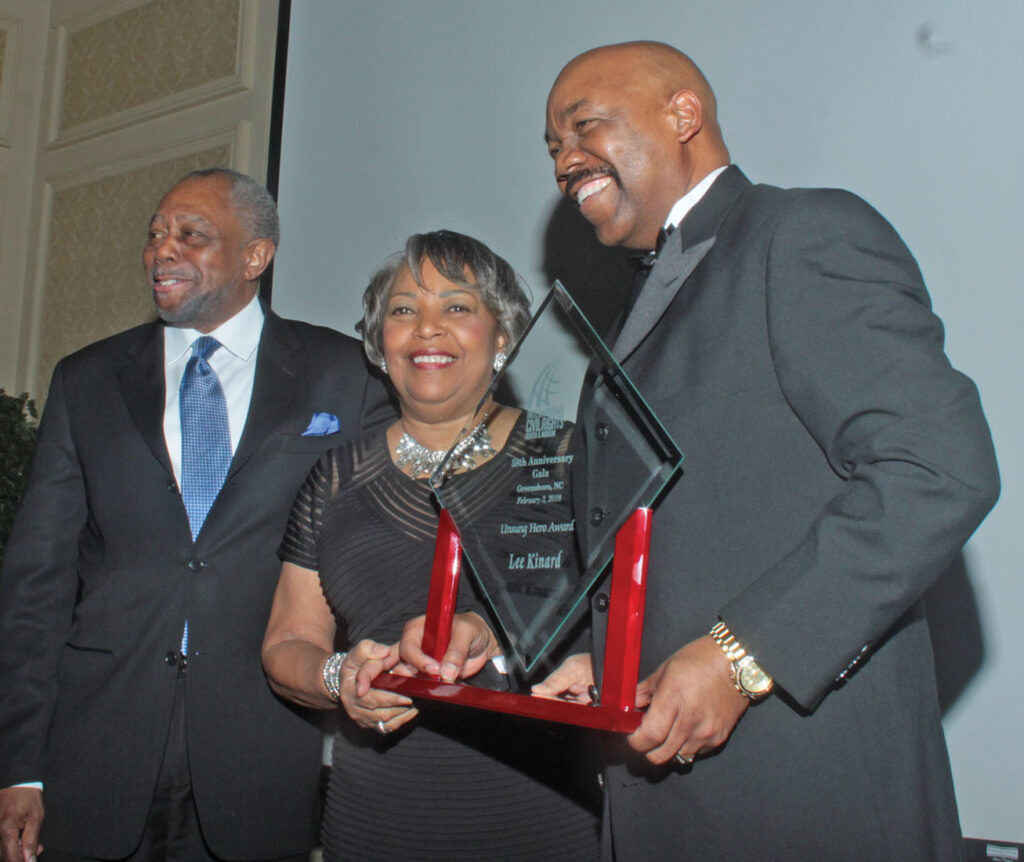 On July 25, 1960, Greensboro resident, Charles Bess and three other African American employees took their seats at a newly integrated lunch counter. Fifty-eight years later, Bess talked about how it felt to visit the former F.W. Woolworth lunch counter he worked at for years before he was ever allowed to eat at it.

“Every February, I get excited about this month because Woolworth is a place I will never forget,” said Bess about the 1960s lunch counter sit-ins.

The International Civil Rights Center and Museum held its 2018 Annual Gala Fundraiser on Saturday to celebrate the 58th anniversary of the historic sit-ins that began at the F.W. Woolworth lunch counter five-and-dime store in Greensboro.

Bess was one of six people presented with awards at the annual gala for their contributions to civil and human rights. He and three honorees, William “Bill” Lucy, Debra Lee and Joseph Williams shared reflections on the past at a press conference held at the museum before the gala.

A former F.W. Woolworth’s busboy, Bess was one of the first African Americans to be served at the all-Whites lunch counter in Greensboro in 1960. He was also present to bear witness on February 1, 1960, when four N.C. A&T State University freshmen took a seat at the lunch counter and refused to move. It took six months of organized protests by N.C. A&T College and Bennett College students, Dudley High School students, a few students from N.C. Women’s College (today UNCG) and community leaders, to spark a national movement. That movement ultimately led to the integration of restaurants and public accommodations across the South.

Bess said that he and three other African American employees were instructed by the manager to change out of their uniforms and take a seat at the counter.
“I was excited,” he said. “At last.”

This year marked the 25th year the museum has hosted the fundraising gala, and the eighth anniversary of the opening of the museum.

Labor movement activist William “Bill” Lucy, who helped lead the 1968 Sanitation Strike in Memphis, Tenn., received the Alston/Jones International Civil and Human Rights Award. Lucy said what the A&T Four did by sitting at the counter also raised issues of inequality across the board.

“As Dr. King would say often, it’s great to be able to sit at the lunch counter, but if you can’t pay the price of a hamburger, then you have some other issues to deal with,” said Lucy. “They (A&T Four) raised some fundamental questions of inequality throughout the system, not just in terms if you have the right to sit, but do you earn the living sufficient to allow you to enjoy while you’re sitting. And we’re still fighting that fight.”

President and Chief Operating Officer of Black Entertainment Television (BET), Debra Lee, was presented with the ICRCM Trailblazer Award. A 1972 graduate of Dudley High School in Greensboro, Lee noted that the museum is a source of pride for her.

“I’m proud to be someone who grew up in Greensboro. To see the museum is incredible,” she said.

Growing up in Greensboro six years after the sit-ins took place, Lee admitted that she doesn’t remember a time she couldn’t sit at the lunch counter; however, she reminded people that there is still a long way to go.

“It’s such an important reminder to the struggles we’ve been through as African Americans. We have a very long way to go. In the past year, we have been reminded how far we still have to go and how many struggles we are still fighting. I think that while this museum stands for the struggles in history, it can also inspire us,” said Lee.

Lee’s family moved to Greensboro from Los Angeles in 1966 when she was in the sixth grade. She recalled growing up in Benbow Park, a middle class neighborhood with Black doctors, lawyers and other professional people. On Lee’s first day of the sixth grade, she was elected class president.

She thanked her teachers for giving her the skills that helped her go from Greensboro to Brown University (Providence, R.I.) and on to Harvard Law School. “I know they gave me the best skills to compete… I had confidence… I was empowered.” She also thanked the founders of the International Civil Rights Center and Museum and the awards selection committee for recognizing her life’s story and the late Rev. Howard Chubbs, pastor of Providence Baptist Church for giving her an ethical and moral foundation. Lee, who was the first youth reporter for the Carolina Peacemaker, thanked the paper for giving her a weekly column called the “Dudley Byline.”

“It all started at the Carolina Peacemaker,” she said.

Dr. Lee Kinard Jr., retired host of WFMY’s Good Morning Show was recognized with the Unsung Hero Award by his colleague, former news anchor Sandra Hughes. Kinard’s 50-year career in television and radio includes a co-anchor position on News 2 at 6 (1984-1999) and a producer of award winning documentaries on a variety of local, national and international topics.

“He knew the importance of being inclusive of all people’s voices,” said Hughes.

This year also recognized Rev. Jesse Jackson with the Lifetime Civil and Human Rights Award. Jackson became a student at N.C. A&T College in the fall of 1960. He said it was Greensboro that paved the way to getting rid of some of the hatred and segregation that ruled the South.

“This city was on the ground floor of the movement and changed the course of history,” said Jackson.

Longtime Greensboro attorney Joseph Williams was presented with the Lifetime Community Service Award. Museum co-founder and Guilford County Commissioner, Melvin “Skip” Alston hailed Williams for being a local leader who provided a voice for those who felt they did not have a voice.

A former prosecutor and Guilford County judge, Williams said he was just doing what came naturally to him.

“I’m highly honored to be recognized by my own community, and the fact that I’m being recognized for doing what came naturally to people of goodwill across this whole country,” said Williams, who encouraged community support of the museum.

“If this museum touches you, support this museum. We have got to know our past. Without our history, we do not exist,” said Williams.