Frederick Cox autopsy report shows he was shot in the back

HIGH POINT — A long anticipated state medical officer’s autopsy report on the gunshot death of 18-year-old Frederick Cox Jr. by an undercover sheriff’s deputy at a High Point funeral last November only intensified community anger and raised questions about the delay in a public response by the State Bureau of Investigation (SBI) and other law enforcement and prosecutorial authorities.

At a news conference this week on the steps of the Guilford County Court House in High Point, national civil rights lawyer Benjamin Crump dramatically pointed to an official anatomical diagram of where bullets struck the teenager. Quoting from the autopsy report, he said Cox had been gunned down by four shots, with at least two penetrating entries from behind, prompting gasps from community members and local advocates for truth and transparency.

With Cox’s mother and stepfather nearby, Crump continued, saying other bullets from the gun of an undercover Davidson County Sheriff’s Deputy struck Cox in his neck and front of left thigh. 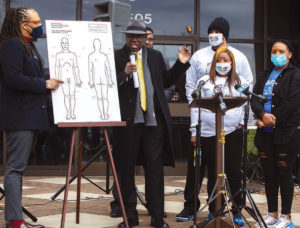 “Your son is killed in the church by an undercover police officer and they haven’t said a word to you about why,” the civil rights lawyer said to the Cox family and friends who surrounded them with NAACP leaders James Adams, High Point branch president, and Rev. T. Anthony Spearman, state president.

Throughout the news conference, Cox was heralded a hero, dying while shielding people entering the Living Water Baptist Church in panic after a memorial service on November 8, 2020, when gunshots erupted from two passing vehicles on Brentwood Street.

The autopsy report indicated no firearm residue on Cox’s hands, indicating he had not fired a gun, contradicting early reports and supporting eyewitnesses and families that he did not have a gun in his possession.

Since the shooting, the Cox legal team, family members and supporters have asserted that the teenager was killed without cause, prompting a sustained chorus of “Fred should not be dead” led by Crump and Rev. Greg Drumwright, a Greensboro pastor, activist in voting rights, social justice and participant in the past events with the Cox family.

Raising his fist, the pastor declared, “We are going to pour resources into this case until we get answers,” demanding “truth and accountability for this family” because “Fred was not a gang member and was attending a funeral of a friend and ended up dying.” Visibly shaken, Drumwright said he, the Cox family and community are personally insulted that they were led to believe false information that “Fred was a thug that died at a thug’s funeral.”

Both Crump and Drumwright demanded the SBI release its investigations, and that the district attorneys in Davidson and Guilford County need to respond. Crump said the SBI has been delaying the release of its investigation, saying the other high profile police shootings/killings of unarmed African Americans with which he has been involved — killing of George Floyd, Breonna Taylor, Ahmaud Arbury and others — were concluded much faster.

He said Cox’s mother had been interviewed once by law enforcement, and that other eyewitnesses had not been interviewed, including Vivian Wright and 13-year-old son Tavaris Wright, whom the slain teenager is credited with saving their lives. In weeks following the shooting, young Tarvaris wrote a passionate letter to the Cox family, declaring, “Fred is my hero.”

Now that the autopsy has been released, the SBI has no more excuses to delay, he said, referring to earlier responses from the agency.

“This autopsy report tells us more than SBI has told this broken-hearted mother and family,” Crump said. “They’re having to solve it on their own. We’re here to declare today that SBI has no more excuses. We’re demanding that you either charge the officer or release the investigation to the public. It’s about truth and transparency. It doesn’t matter if the officer violated his policies and procedures. It’s about the truth. It’s about accountability.”

Hours after the news conference, the SBI said it can’t be certain when the Cox investigation report will be released and at that time it will be shared with the district attorneys in Guilford and Davidson counties within a week or so.