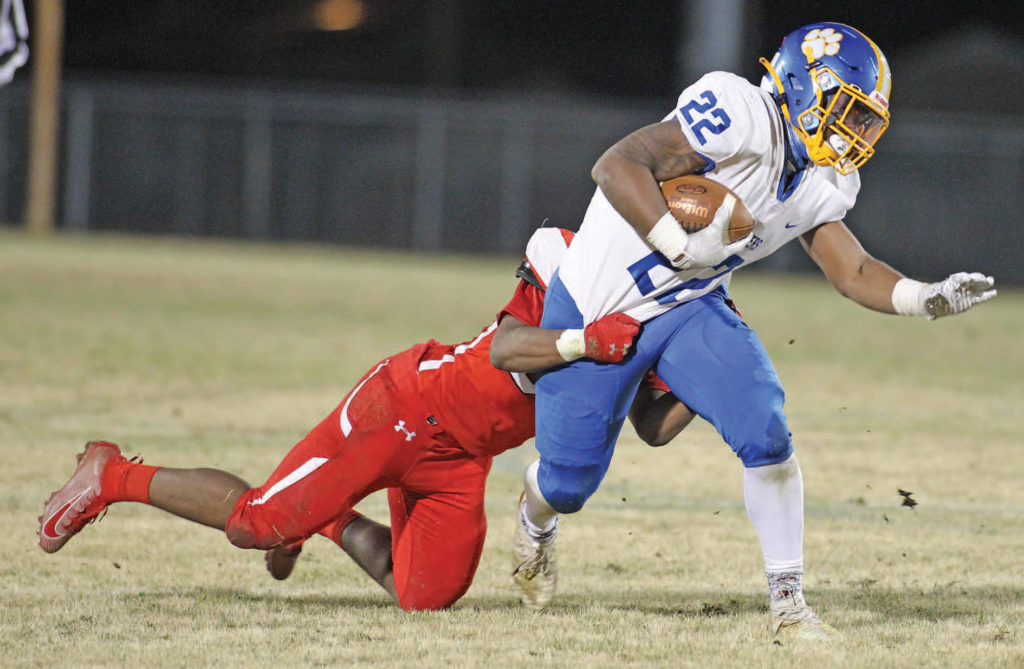 Dudley senior running back Milan Summers paced the Panthers with 14 carries for 112 yards and three touchdowns against Page. Photo by Joe Daniels/Carolina Peacemaker

With so much uncertainty surrounding the COVID-19 pandemic, the only focus for Dudley senior running back Milan Summers this past year was to work on his craft and hope for a chance.

At times he wasn’t sure if he’d ever return to the football field again or if he’d even have the ability to showcase his talents to potential college scouts, but through it all Summers just constantly sought new ways to improve his skill set.

So when the opportunity finally arrived on February 25, as high school football made its triumphant return to the Triad, the 5-foot-8, 205-pound running back was more than ready to seize the moment.

Utilizing an improved speed burst, Summers ran for 112 yards and three touchdowns, leading Dudley to an impressive 32-6 victory over Page High School in what was the season opener for both teams.

“It feels wonderful,” said Summers, who was the game’s leading rusher. “Just having the ability to play with my brothers one last time, this is my senior year, so I was glad that I was able to come out here and shine.”

Due to a last-minute schedule change, the contest was moved to Dudley’s Tarpley Stadium even though Page was officially listed as the home team. The normally packed stands inside Tarpley were limited to just a few dozen family members and specially-invited guests from both teams. And although the weather was sunny and in the low 70s earlier in the day, by kickoff the temperature had dipped all the way back down into the 30s.

Undoubtedly, playing in late February during a pandemic would take some time to get used to, but in a lot of ways the game still had the look and feel of vintage high school football.

“To me it’s like a blessing,” said Dudley head coach Steven Davis. “Not playing since 2019, we missed a whole year and then we’re finally able to get some football in now. I know it’s not the regular time we usually get out here but at least we’re getting a chance to play.”

During his prolonged off-season, Davis said Summers performed a full audit of his strengths and weakness and determined that – although he was highly regarded as a bruising power back- he needed to improve his speed and quickness if he wanted to have a realistic shot at the next level.

He worked extensively this summer with local football guru Priest Everhart and spent countless hours on the track with several speed trainers.

“I would definitely have to say thank you to the outside coaches, especially Coach Everhart,” said Summers. “This was the whole plan to work on my speed this year so I would be able to break those long runs like I did tonight.”

The extra gear was on full display during the first play of the third quarter, when he took a handoff up the middle and split the Pirates defense for a 41-yard touchdown. That put the Panthers ahead 26-0 and effectively erased any plans Page might have had for a comeback.

According to his coaches, Summers’ transformation from a bowling ball to a speed demon will make the entire Panthers offense even more dynamic this season.

“He’s been working on his speed,” said Davis. “We know he can run over people but on the next level he’s going to need to outrun some people.”

The Panthers also got major offensive contributions from junior quarterback Jahmier Slade, who completed 15-of-30 passes for 182 yards and one touchdown.

Slade’s main targets were four-star junior wide out Mekhi Wall, who finished with five catches for 58 yards and a touchdown, and senior tight end Johncarlos Miller, who caught five passes for 101 yards.

Miller, a 6-foot-5, 235-pound receiver who will be playing for Elon next year, was nearly unstoppable on third down and in the red zone, towering over the smaller Page defenders to move the chains.

“That’s exactly what we expected from him coming into the season,” said Davis. “He’s such a big target that you can’t miss him easily and he has great hands.”
The opening week loss was a rough debut for new Page head coach Doug Robertson, whose team was held to just 40 yards of total offense and did not cross midfield until midway through the third quarter.

Defensively, the Panther’s front seven overwhelmed Page’s offensive line all night, putting sophomore quarterback Nick Williamson under constant duress. He completed just five of 17 passes and was picked off in the second half by Dudley defensive back Steven Davis II.
However, the 6-foot-3, 190-pound Williamson did display some flashes of talent and threw a 9-yard touchdown pass late in the fourth to finally get the Pirates on the scoreboard.

Dudley will return to action this Friday night with a 7 p.m. showdown against 1-0 Southeast Guilford, who routed Asheboro 27-0 last week. Once again, the Panthers will be back at Tarpley Stadium but this time they’ll be the home team.

Davis is confident that with a game under their belt and another solid week of practice, the Panthers will be ready for the challenge.

“There’s things we got to clean up. Little mistakes in our blocking scheme and of course we’ll have to eliminate the penalties. We had 13 penalties tonight [for 95 yards] and that’s something we’ve got to clean that up if we expect to win next week. The biggest thing for us is to not become complacent.”

Semaj Marsh is a sports writer with the Carolina Peacemaker. He is based in Greensboro.