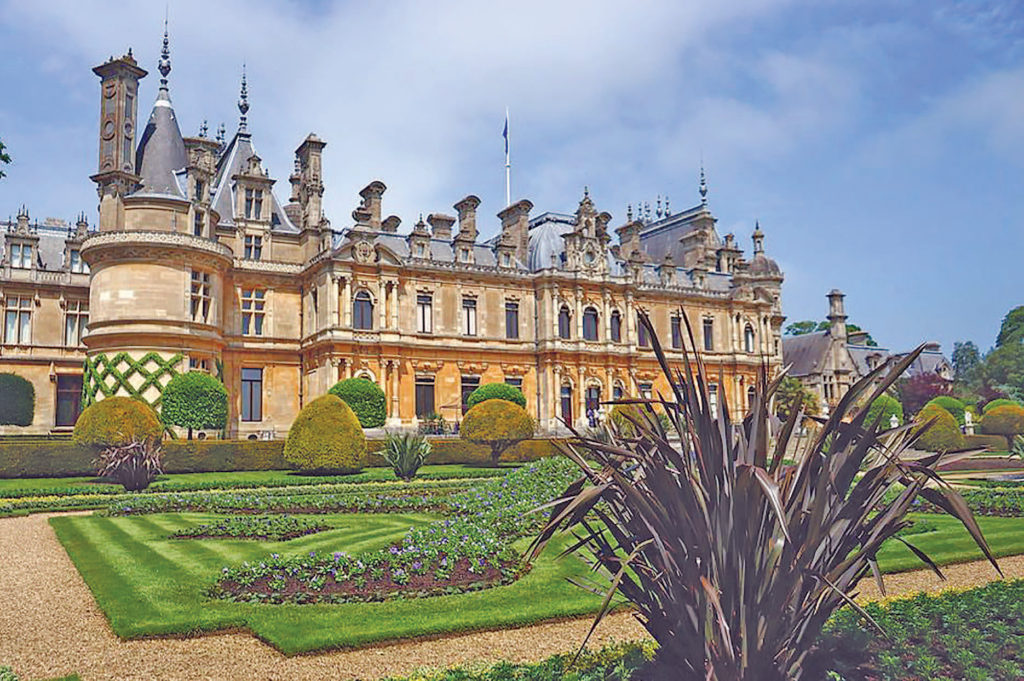 March 19, marked the first day of spring, and it’s also the earliest first day of spring in 124 years. Given the current reality of quarantining, it isn’t exactly prime time to explore the gardens of the world, but House Beautiful has rounded up virtual tours of five breathtaking gardens from across the globe. Get ready to explore the lush and serene gardens of England, France, Chicago and Hawaii, and live like a Rothschild, Claude Monet or a British Royal. Anything is possible from your living room.

The Waddesdon Manor is a Neo-Renaissance style château that has been a Rothschild family home since the late 1800s, with its first owner being Baron Ferdinand de Rothschild and its last owner being James de Rothschild. After his death in 1959, James de Rothschild left the house, the grounds, and the majority of the collections seen throughout the home to the National Trust, so that the public can visit and appreciate the home and gardens. Since then, the Rothschild Foundation has managed Waddesdon Manor, and it is one of the most visited National Trust sites, garnering upwards of 466,000 visitors in 2018. The gardens were designed by Baron Ferdinand de Rothschild with help from landscape architect Elie Lainé. The breathtakingly beautiful interiors of Waddesdon Manor can also be virtually toured here.

Legend has it that famed French painter Claude Monet decided he had to move to Giverny, France, upon seeing the quaint village from a train window. After purchasing his own house and land in Giverny, Monet manifested his vision of creating his own picturesque gardens so that he could paint them. Water Lilies, a series of some 250 paintings by Monet, was all inspired by his gardens, which includes prominent works like The Water Lily Pond, known for its Japanese bridge overlooking a tranquil pond of lilies. Monet’s garden was his main source of artistic inspiration for the last three decades of his life, and he even painted numerous creations while dealing with visual impairment of cataracts. When you’re done touring the gardens, you can also virtually tour Monet’s house.

With more than 50,000 members, the Chicago Botanic Garden has the highest membership of any public garden in the United States. And it’s easy to see why: The Garden consists of 385 acres and has a grand total of 27 gardens and four natural areas, so there is plenty to see here, whether you’re on a virtual tour or a real-life one. The Chicago Horticultural Society, which was founded in 1890, officially opened the Chicago Botanic Garden in 1972. To this day, the Chicago Horticultural Society operates the historic garden located in the Windy City, while the Forest Preserve District of Cook County is its owner. Some of the 27 gardens include the English Walled Garden, the Japanese Garden, and the Plant Science Center.

The Hawaii Tropical Botanical Garden sits on 17 acres and it includes not only its own garden, but a nature preserve as well. With a plethora of waterfalls, streams, and a boardwalk situated on the Pacific coast, this virtual tour is certainly a calming one, both visually and audibly. In 1977, Dan J. Lutkenhouse purchased the property that later became the garden, which was created by Lutkenhouse himself. Following the public opening of the Hawaii Tropical Botanical Garden in 1984, the Lutkenhouse family left the property to a nonprofit trust in 1995. Expect to see more than 2,000 plant species, including more than 80 species of heliconias and bromeliads, not to mention coconut and mango palm trees that have been around for over a century.

Kew Gardens is part of the Royal Botanic Gardens, Kew, which also includes Wakehurst, a historic house and garden located over an hour away, in West Sussex, England. Located on 326 acres and boasting its own palace, it’s no wonder why Kew Gardens is a UNESCO World Heritage Site. This virtual tour also includes Kew Palace—the main surviving structure is known as Dutch House— which was once the residence of King George III and his family. Although it is the smallest royal palace in existence, it is still an impressive historic home, made in the style of Mannerist architecture with Dutch influences. Kew Gardens and Wakehurst have a grand total of approximately 27,000 taxa of plants, more than eight million specimens of plants and fungal herbarium, and a seed bank that contains more than 40,000 species.