FILM REVIEW: ‘Nope’ is a yes! — Peele delivers with follow-up 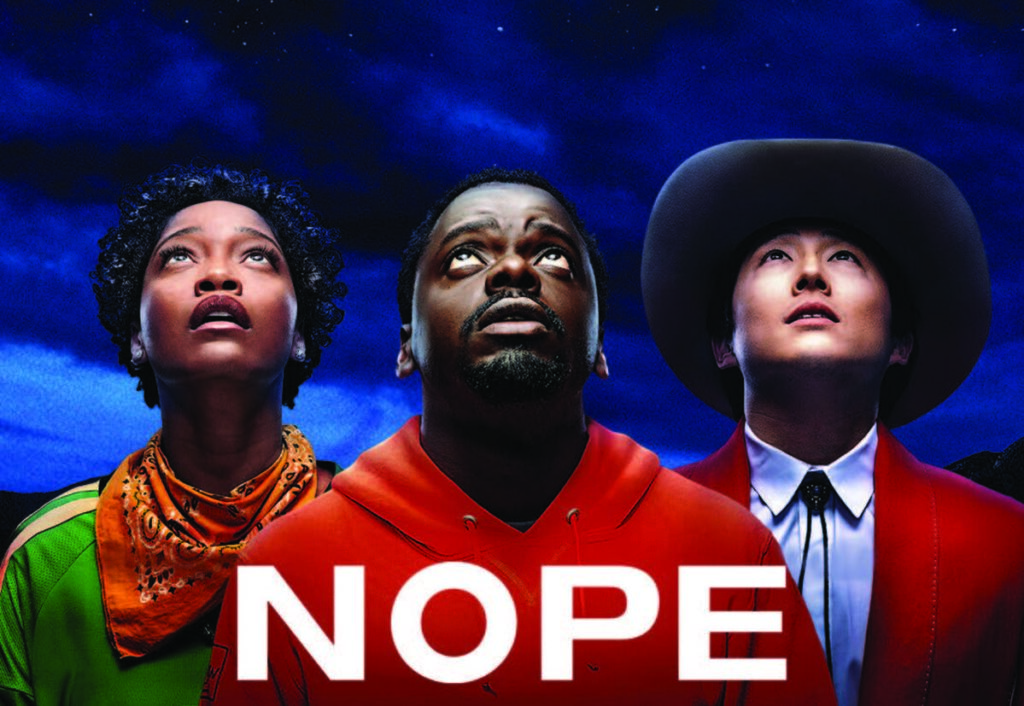 Jordan Peele does it again, making a must-see film that will be talked about in film classes, the barbershop, dinner tables, Hollywood, and the like for many years to come. Courtesy Monkeypaw Productions.

Jordan Peele has been compared to horror and psychological thriller giant Alfred Hitchcock and science-fiction legend Steven Spielberg, but Peele is in a league of his own. Peele’s masterful ability to merge two beloved film genres, with social commentary on issues of race, gender, class, and sexuality is unparalleled in the current filmic landscape. Initially celebrated for his comedic chops, Peele burst onto the horror scene with his cult-classic horror Get Out (2017) and followed-up with the scary and often meandering Us (2019). Both films used symbolism brilliantly and succeeded as horror films because the monsters were familiar characters, symbolic of society and played by characters who look and feel like us.

There is otherworldliness about Peele’s films that traffic in the mundane, to highlight the complexity of the precariousness of a world driven by a perverse need for power, influence and capital. Peele humanizes those who live on the margins or the underbelly of the society and brilliantly recasts their lives into the horror show that is often America and what it means to live on the margins of society while the tokenism and appropriation of your culture is center stage.

Peele delivers with Nope, a film set on the margins of Hollywood, focusing on the family of the Black jockey captured in the early films of trailblazing photographer and filmmaker Eadweard Muybridge. By incorporating Muybridge’s short film, “The Horse in Motion,” Peele elevates the importance of Black jockeys in the many aspects of American culture and the significance of the Black presence and influence at the beginning of Hollywood.

The Haywood family is a Black family that has worked as horse wranglers for Hollywood for more than a century. They are the descendants of the Black jockey showcased in the Muybridge film and are still stuck in the same position as their ancestors despite the change in time and ostensibly space. Keith David plays Otis Haywood Sr., the patriarch of the Haywood clan who is hell bent on maintaining his ancestor’s greatest dream. Daniel Kaluuya stars as Otis Jr. (OJ), who works with his father and is unimpressed by the movie business or the jackasses who permeate filmmaking culture.

Although OJ, who is Black, is the expert on the movie set, he is belittled and demeaned by all of the White folks on set from the director to the production assistants. Keke Palmer stars as Emerald, the free-spirited daughter who plays to the hostile audience, literally listing all of her skills and abilities as she performs servitude.

The audience knows if Emerald was white, the offspring of Hollywood royalty, and working with all of those skills, Emerald would be the star or director of the film and calling the shots. Such is not the case with the Haywood clan, who is relegated and reminded of their position on the lower rungs of society and Hollywood throughout the film.

Desperate for money and fame after being kicked off set, the Haywood family decides to capture the greatest spectacle ever – unidentified flying objects (UFOs), now called unidentified aerial phenomena (UAPs). OJ and Emerald set out to photograph and record the alien life that is omnipresent yet largely ignored by those who live with them on the outskirts of Hollywood.

Instead of engaging scientists or the government, the Haywoods set out to do it themselves so they can reap the financial rewards and adoration of an industry and public that has little to no use for them otherwise.

The Haywoods embody the “find a way or make one,” spirit of Black independent cinema and literally create and capture the story that was always worth telling but undervalued by Hollywood and society. Along the way, they pick up Angel (Brandon Perea), a techie with an obsession with outer space and Antlers (Michael Wincott), a maverick cinematographer who is still chasing cinematic glory in spite of his elite status in the industry.

Antlers, who insists he captures images, but is not part of the story, disposes of his philosophy, deciding to be part of the spectacle and jeopardizes the entire shoot and lives in a harrowing scene.

One of the most interesting parts of the film is the number of Easter Eggs (intertextual references) strewn throughout the narrative. In fact, it is an intertextual reference to 1980s sitcoms that is most harrowing and provides the context and strongest symbolism of tokenism and what that means for people of color pursuing the Hollywood dream. Ricky “Jupe” Park (Steven Yeun) is a former child star who survived a merciless attack by a chimpanzee named Gordy during the taping of a hit 1980s sitcom.

Jupe now runs Jupiter’s Claim, a Western-themed amusement park, pulling in an audience that would probably be at Disneyland if they could afford it. Instead, Jupiter’s Claim fits the bill, and Jupe who survived the brutality of the attack and the tokenism of Hollywood, clings to his desire to be the star of the show.
While he appears to work with OJ in taking horses off of his hands to keep the horse farm going until OJ can afford to buy them back, Jupe actually works against his closest ally in order to create a spectacle for attendees at the expense of all involved.

Nope is a commentary on so many things – the environment, animal cruelty, racism, sexism, heterosexism, the entertainment industry – and shows how all of those things are interconnected in shaping who we are as a society. It’s the intersectionality for me.

With a storyline told through a historical lens that interrogates society and the people who make up this world and the next, strong performances and a brilliant use of camp and other comedic tools, Peele does it again, making a must-see film that will be talked about in film classes, the barbershop, dinner tables, Hollywood, and the like for many years to come.