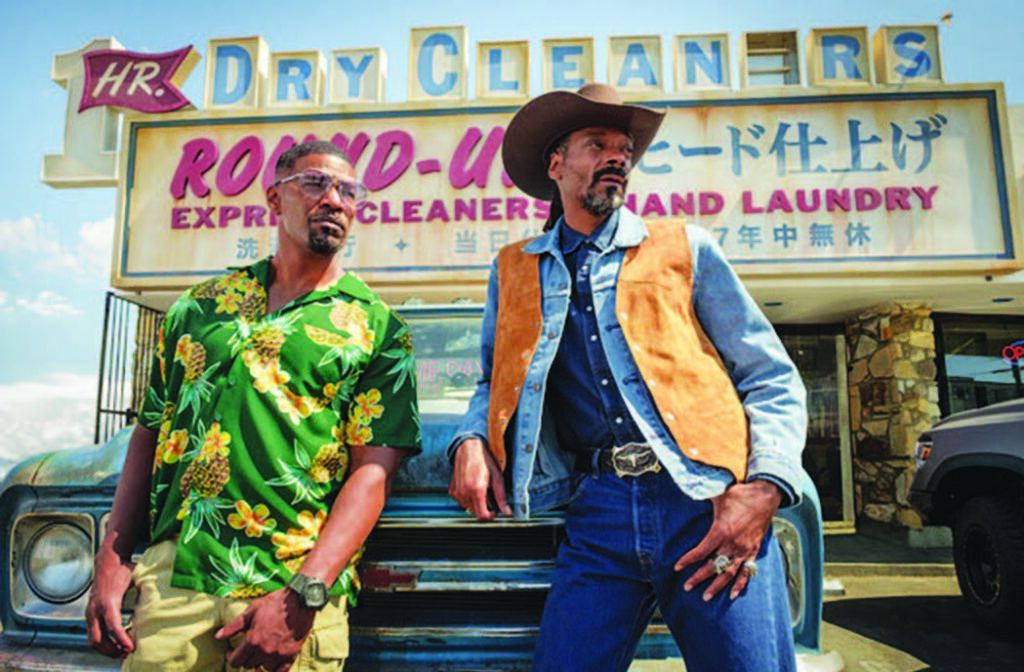 He works hard for the money. Hunting, killing and extracting teeth from vampires for a living, in the hot San Fernando Valley, is no joke.

Bud (Jamie Foxx) acts like he’s just an innocuous pool cleaner in SoCal. But on the downlow, he’s hunting bloodsuckers for cash. He just got kicked out of the international vampire hunters union for breaking rules and to make real dough, he’s got to be a member. His buddy Big John (Snoop Dogg), a legendary hunter, pressures the union boss to give him another chance.

Bud is allowed to go on more hunting missions, but only if the dorky union rep (Dave Franco) accompanies him. He has to take the deal—he’s desperate. His ex-wife (Meagan Good) says they need $10K for their daughter’s (Zion Broadnax) school tuition and braces. If he doesn’t cough up the coin by Monday, she and the kid will move to Florida and live with her mom. Pressure. Lots of pressure.

Stunt coordinator J.J. Perry (John Wick: Chapter 2, X-men Origins: Wolverine) marks his directing debut with this misadventure, and his incessant stunt tricks don’t cure what ails. Certainly, he starts the footage with a kinetic fight scene, and he knows his stuff. Vampires do back flips, contort their bodies and die miserable second deaths as they’re decapitated, but nothing seems fresh or innovative. Likely because his filmmaking lacks artistry and style. E.g., even the film’s chase scenes, which look stolen from a Dukes of Hazzard episode, are dull as hell.

Screenwriters Tyler Tice and Shay Hatten’s (John Wick: Chapter 3 Parabellum) tepid writing provides a very skimpy blueprint. Weak premise, feeble story line and not enough drama, laughs or scares to wake the dead. Even when the most venomous vampire, Audrey (Karla Souza), bullies Bud’s wife and child, her threats aren’t all that scary. Bodies pile up, money is made and none of it is memorable.

The sets (production designer Grey Berry; set decorators David A Cook and Lynne Mitchell) and costumes (Kelli Jones) don’t look lived in. The overly bright cinematography (Tony Oliver) makes everything glisten like it’s never been sat on, walked through or worn before. The pacing is decent (editor Paul Harb) and the musical score too (Tyler Bates).

The irony is that the theme song for this venture has been made into the music video, “BUD (Mowing Down Vamps),” which is far more lively, animated, rhythmic and edgy than the entire film. Dave Franco starts the vid with the line, “Mowing down vamps with my best friend Bud…” Then Jamie Foxx & the BSB Boys hit a contagious rebellious rap beat that hooks you in. The 3.5-minute video is dope. Cinematographer/director Taylor Chien directed it and should have directed or co-directed this movie. He’s got the stylish swagger the film lacks, and Perry’s forte is stunts.

Leave it to the invincible Snoop Dogg to save the day. The other cast members may seem blasé, but he makes Big John tough, street smart and charismatic. If his badass hunter character had been the film’s central focus it would have been better. Imagine a horror film where Snoop led the charge. He’d know how to “cut necks and cash the checks.” A Snoop movie almost writes itself.

Streaming audiences, from the comfort of their sofas, won’t complain. Viewers in a theater would not be so kind. Why? Because the bite in this vampire movie is only skin deep.