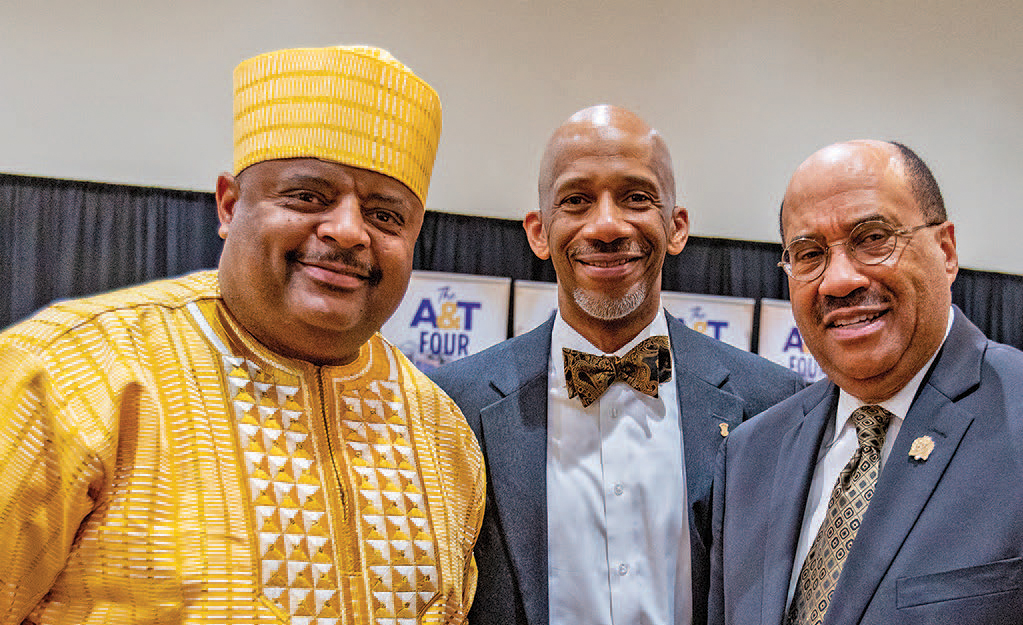 “Some folks understand that you have to do something because it is right and it is just, and not about whether I am able to get a job later,” Martin added.

This year marks six decades since February 1, 1960, the day that four N.C. A&T College freshmen, Jibreel Khazan (formerly Ezell Blair Jr.), Franklin McCain, Joseph McNeil and David Richmond, sat down at a “White’s Only” lunch counter at F.W. Woolworth’s five and dime store in downtown Greensboro, in peaceful demonstration and in request of equal service. Their act of unity sparked sit-in movements to end segregation across the country, further amplifying the voice of the modern Civil Rights Movement.

Khazan and McNeil, along with family members of each of the A&T Four, were also present for Friday’s commemorative events, which began with an early morning breakfast at Alumni Foundation Events Center on campus.

The Richard B. Harrison Players, from A&T’s Theatre Department, performed a reenactment of the A&T Four on the first day of the sit-ins; and A&T’s Fellowship Gospel Choir performed a host of songs including, Lift Ev’ry Voice and Sing.

Martin served as the special guest speaker for this year’s breakfast, where the theme was, “From the Lunch Counter to the Streets,” encouraging voter registration and participation. Martin spoke about understanding that progress takes everyone — those who have pioneered civil rights as well as the younger generations — to build future success.

The current host and managing editor of his own online show #RolandMartinUnfiltered, Martin also encouraged breakfast attendees to think about how to be change agents.

“The Black church, Black press, Black universities and businesses are keys to moving the community forward. Everyone has a role to play. There is no one way or one lane to progress,” he said.
He has been named as one of the 150 Most Influential African Americans in the United States four times by Ebony Magazine, and is the recipient of more than 30 awards for journalistic excellence, including Journalist of the Year in 2013 by the National Association of Black Journalists.

“Were it not for Black media, our lives would not have had the coverage. We would not have had platforms that were covering Black issues when daily newspapers would not even put us in the paper,” said Martin, as he discussed the value the Black press still holds in this day and time.

A former CNN contributor for six years, Martin went on to spend 13 years at TV One, where he served as a regular commentator, host and ultimately manager of two morning news shows on the network. He is also the author of several books including, “Listening to the Spirit Within: 50 Perspectives on Faith,” “Speak, Brother! A Black Man’s View of America,” and “The First: President Barack Obama’s Road to the White House as originally reported by Roland S. Martin,” and he has contributed to many others.

Martin also added that the fight for equality for African Americans will go on and the people have to be ready to stand up and fight.

“Every single thing that African Americans have gotten in this country has been because we’ve had to raise hell, protest, agitate, push and prod, to let folks know that we’re not going to back down. That is simply who we are,” he said.

“As we move to a nation that is quickly becoming majority minority, we are losing our voices. I want you to remember that point as you leave today,” he said. “There is immense African American talent all across this nation. And we, universities like ours and our communities, must enable these talented young people to have a voice.”

Chancellor Martin also presented U.S. Rep. Alma Adams, a two-time North Carolina A&T State University alumna and former Bennett College art professor, with the university’s 2020 Human Rights Medal. The award is the university’s highest honor and it has been presented every year since 2001 to recognize an individual’s endeavors to correct social injustice and honor their contributions towards the betterment of the world.

Adams was elected to her third term representing the 12th Congressional District of North Carolina in November 2018. She serves on the House Committees for Education and Labor, Financial Services and Agriculture; is the chairwoman of the Higher Education and Labor Subcommittee on Work-force Protections and is vice chairwoman of the Agriculture Committee.

Adams is also the founder and co-chair of the first Congressional Bipartisan Historically Black College and University Caucus and helped launch the first Black Maternal Health Caucus in Congress.

Adams was the first African American woman elected to the Greensboro City School Board. She also served nine years on the Greensboro City Council, before she went on to serve at the state level in 1994, when she was appointed to the North Carolina House District 26 seat. She went on to serve 10 terms in the state House. A pioneer of the Displaced Homemakers Bill, Adams successfully spearheaded the state’s first minimum wage increase in nine years.

In addition to receiving graduate and undergraduate degrees at N.C. A&T, Adams earned her Ph.D. in art education and multicultural education from The Ohio State University.

“I got my start here, I won’t forget that. Thank you for this medal. I am honored to receive it. It’s not how long you serve, it’s how well you serve,” said Adams, who also took the time to encourage voter participation in this year’s election.

After the breakfast, community members and students gathered for a wreath-laying at the A&T Four memorial statue on campus, and a panel discussion on voter registration and the 2020 Census in Harrison Auditorium.