The former president of the N.C. NAACP has filed a blistering 28-page lawsuit against national NAACP Pres./CEO Derrick Johnson and Board of Directors Chairman Leon W. Russell, along with six other N.C. NAACP officers including current N.C. NAACP President Deborah Dicks Maxwell and Charlotte-Mecklenburg Chapter Pres. Corrine Mack “…in their individual capacities for Defamation and for a Civil Conspiracy to have Plaintiff (Spearman) removed from the Office of the President of the North Carolina NAACP,” according to the lawsuit.

Rev. Spearman’s lawsuit, filed by Greensboro attorney Mark T. Cummings of the Cummings Legal Group in Guilford County Superior Court, contends that “the Defendants conspired to have Plaintiff (Spearman) removed because of his support of victim of sexual harassment (Jazmyne Childs) who brought litigation against the National NAACP and an employee/member of the North Carolina State Conference NAACP (Rev. Curtis Gatewood) and because of Plaintiff’s growing national profile stemming from his many successful and high-profile activities on behalf of the People of North Carolina and the N.C. NAACP.”

Gatewood has denied the sexual harassment charge, and is not a defendant in Rev. Spearman’s lawsuit, though he is alluded to.

Rev. Spearman contends that because he stood with Childs publicly when she tearfully accused Pres./CEO Johnson in 2019 of ignoring her repeated cries to suspend Rev. Gatewood after her 2017 sexual harassment allegations were confirmed by an external investigation, Spearman became a target for retribution. 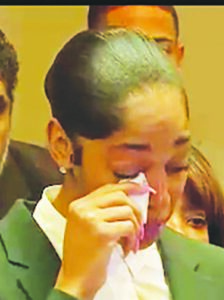 In Rev. Spearman’s suit, he alleges that Johnson supported Gatewood to oppose him for reelection as N.C. NAACP president in 2019, only to back off once Childs and her supporters went public. That’s when Johnson finally suspended Gatewood’s membership.

But then, Spearman alleges that Johnson and NAACP Board Chairman Russell “…devised a plan to remove… [Pres. Spearman] and other member-leaders of the [N.C. NAACP]” for supporting her.
With the help of at least six other Defendants, a plan was devised to falsely accuse Spearman of fiscal malfeasance, seemingly “forcing” Johnson to put the N.C. NAACP under the control of a national administrator.

For his part, in a “plan of action” email dated Sept. 27, 2019, Rev. Gatewood advised his campaign supporters, in an open letter, to distract the press “from the serious allegations of sexual harassment made against him with allegations of “rumored …theft and/or misappropriation of N.C. NAACP finances…” over the previous five years.

Rev. Barber denied Gatewood’s charges when queried by this reporter then, saying that charges of misappropriation weren’t possible because he implemented a two-signature verification system once he took over the state conference from 2005-2017. That system remained in place during Rev. Spearman’s tenure for all disbursements.

An October 19, 2019 story by this reporter about a volatile confrontation at the 2019 N.C NAACP Convention in Winston-Salem between some N.C. NAACP members from Alamance County, who supported Gatewood, and Spearman, at a church, reported: 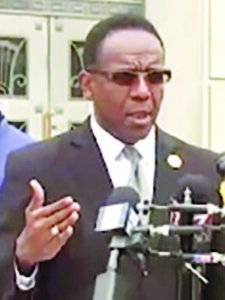 Members of that branch alleged that Dr. Spearman “…faces allegations of financial misconduct, and that Gatewood had promised to audit the state organization if he were elected,” according to the Winston-Salem Journal.

Sources close to Dr. Spearman, however, dispute those allegations, saying that the structure of the N.C. NAACP hierarchy and procedures after Rev. [William] Barber took over in 2005 from the previous president wouldn’t allow for that to happen without more than one [N.C. NAACP}officer involved.
What most people also did not know is that Rev. Barber routinely had the N.C. NAACP fiscal books audited, and Rev. Spearman continued that practice when he took over. That was not a requirement or normal practice of NAACP branches nationwide.
“The purpose of Defendants’ plan to damage [Spearman’s] reputation was to ensure that when the elections resumed, [Spearman] would have a difficult time being re-elected,” the lawsuit maintained.
Constitutional violations were being alleged against Spearman, but none were ever brought forward to a hearing or forum of due process.

The suit further alleges that by removing Spearman and his leadership team, any and all cooperation with Jazmyne Childs in her sexual harassment case against Gatewood and the national NAACP would cease because needed documents would be unavailable to her.

It was at that same October 2019 convention when Johnson flew to Winston-Salem, and publicly lambasted Childs for going public with her charges, that the national administratorship was also announced for the state conference, with national Board member Gloria J. Sweet-Love put in charge.

February 2020, Childs filed suit in Durham Superior Court against the NAACP and Rev. Gatewood, and September 2020 when she added Derrick Johnson to her lawsuit for publicly making false statements about her at the N.C. NAACP Convention. 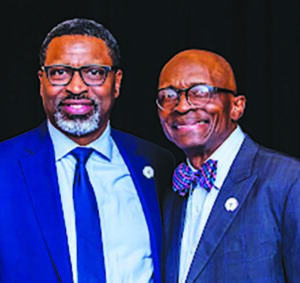 False allegations and personal attacks continued to circulate against Rev. Spearman from those who opposed him, making it difficult for him to lead the state conference.

By October 2021, Deborah Dicks Maxwell was allegedly supported by Johnson, Russell and Sweet-Love to oppose his presidency. Sweet-Love allegedly, without notice, changed the election process normally conducted per NAACP Constitution and Bylaws, and when it was all over, Maxwell was the victor, ousting Rev. Spearman.

At least 20 outraged N.C. NAACP members from across the state filed an Article 10 complaint with the national NAACP about the corrupted election process, only to have Pres./CEO Johnson dismiss it.

Rev. Spearman is accusing NAACP Pres./CEO Derrick Johnson of slander for falsely accusing him of misappropriating funds publicly during the 2019 convention in Winston-Salem. He is including Board Chair Russell, and Administrator Sweet-Love in the slander charge for repeating the same for the purpose of injuring Rev. Spearman’s reputation to ultimately remove him from office.
Rev. Spearman is seeking compensatory damages against those and six other defendants for four claims of defamation and civil conspiracy in an amount excess of $25,000 each and entitled to presumed damages for mental pain and suffering, inconvenience, and loss of enjoyment.

He adds a fifth claim for punitive damages against all defendants, also for over $25,000 each.