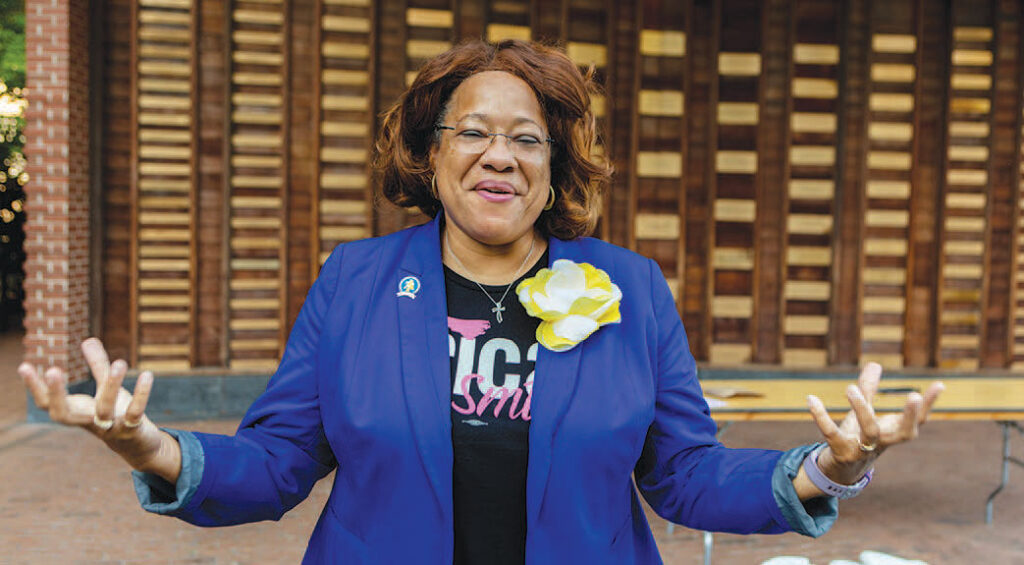 Erica Smith, a democrat U.S. Senate candidate and N.C. A&T State University alumna, wraps up her campaign tour in Greensboro. Throughout the month of September, for every dollar that was donated through August, Erica Smith’s campaign for Senate says it will knock on a door in a North Carolina county that Donald Trump won in the 2020 presidential race. “We are fighting for an America that works for all. And you can’t spell America without ‘Erica’,’ Smith said. Photo by Ivan Saul Cutler/CarolinaPeacemaker.

The N.C. A&T State University class of 94 alumna noted that she was excited to return to where her political career started as part of the tour.

“We wanted to come back to the place that gave me my political consciousness and awareness and taught me how to advocate for the things that matter to constituents,” said Smith. “North Carolina A&T has been an advocate in the fight for civil rights for years. We have the A&T Four. I am continuing in those footsteps, standing on their shoulders, fighting for an America that works for all of us.”

Smith holds a bachelor’s degree in mechanical engineering from North Carolina A&T State University, and a master’s degree in religious studies from Howard University. Smith began her career as a Senior Engineering Specialist for the Boeing Co. Prior to her retirement from the engineering field she also served as a patent examiner in the Chemical Engineering Technology Center of the U.S. Patent and Trademark Office.

She represented District 3 in the North Carolina Senate from 2015 to 2021. She was a candidate for the Democratic nomination for the U.S. Senate in 2020, where she finished second in the March 2020 Democratic primaries.

Prior to serving in the N.C. General Assembly, Smith served for six years on the Northampton County Board of Education from 2008 to 2014 and in grassroots organizing and community leadership as Democratic Party Chair and First Vice-Chair for Northampton County from 2001 to 2015. Smith shared that during her tenure as student body president at North Carolina A&T, she helped lead efforts to add a mandatory six hours of multicultural or Black studies into the curriculum.

“This is a natural path for me. I have been working, gaining the skills, paying dues and learning the rules for many years now,” she said.

Smith spoke to a small crowd on Thursday, detailing her platform that includes Medicare for all, expansion of broadband access, racial justice, and canceling student loan debt.

“We have to prioritize human investment such as having universal pre-K and free community college. I don’t feel that getting a degree in this country should confine you to a lifetime of debt,” she said.

Born at Fort Bragg and raised in Northampton County, Smith spent her summers picking cucumbers and harvesting corn on her family’s farm. Her platform also consists of supporting legislation that provides resources for Black farmers, reparations for the Black community and living wages.

“One issue that is undoubtedly a concern across the state is the economy. We don’t have a worker shortage as much as we have a living wage shortage. For me, as a single working mom, I know the path that I had to navigate and so many North Carolinians are struggling to make things work on such low wages,” she noted.