Early voting kicks off in Greensboro 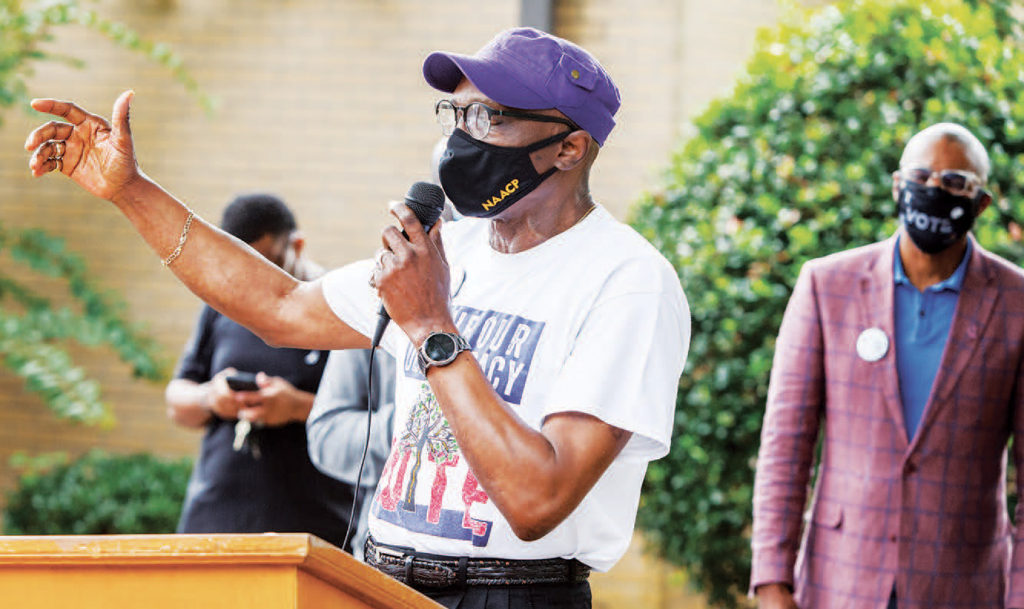 Early voting kicked off in Greensboro last week on October 15, with community members and state representatives all flocking to the polls.

According to early voting totals for October 21 in Guilford County, 81,235 ballots have been cast so far. The N.C. Board of Elections has calculated that there have been 1,517,439 early voting ballots and 662,118 absentee ballots cast across the state.

The last day to request an absentee ballot is October 27.

Rev. Cardes Brown, pastor of New Light Baptist Church and president of the Greensboro branch of the NAACP, said it was hopeful to see all the people come out for early voting.

“I am encouraging all of Greensboro to exercise your right. It is time for a change. Don’t allow anyone to suppress your vote,” said Rev. Brown.

Sen. Robinson (D-28) noted that although record numbers of people are casting absentee ballots, there are still people who want to go to the polls.

“Today is a phenomenal day. I have seen people on wheelchairs, walkers, canes, etc, who could get handicap provisions, but instead they said, ‘no, I want to get in line with my people, vote and make sure my vote is counted,’” said Robinson, who added, “The older folks are coming out to vote. People like my mother – who passed last year – she was in a wheelchair, but she went to the polls every election to cast her ballot, to make sure her vote was counted,” she said.

Throughout Guilford County and around North Carolina, many volunteers were assisting voters with specials needs, transporting them to early voting sites and helping them vote.

Civic-minded voter, Howard Goldberg, 64, of Greensboro, helped several sight-impaired people, driving them to the polls and assisted with same day registration and voting. As authorized by the voters, he dispassionately read and marked their ballots as directed without guiding or influencing preferences.

“My parents taught (me) well, to be civically-minded and help other people, especially those needing special attention,” he said before arranging voting for Terry Evans, 33, and Lewis Cochran, 42.

Goldberg pre-arranged Cochran and Evans’ registration and voting at the Brown Recreation Center early voting site. From his car, arm-in-arm, he escorted the two men into the building. After completing the necessary registration and authorization forms, he called over the site supervisor who assisted them and an official precinct observer to witness the voting.

Greensboro resident, Tinnequa Wall, said she came out on the first day of early voting because she wanted to make sure her vote would be counted.

“We need to vote like our lives depend on it. I hope people understand that the individuals who make the laws don’t always understand the institutions that are keeping the people from getting what they need in their communities,” said Wall. “I encourage everyone to get informed about what and who is on the ballot, and then go vote.”
Early voting for Guilford County is from October 15 – 31 at 17 sites across the county. Election Day is November 3 at your assigned precinct.

Ivan Saul Cutler contributed to the content of this story.