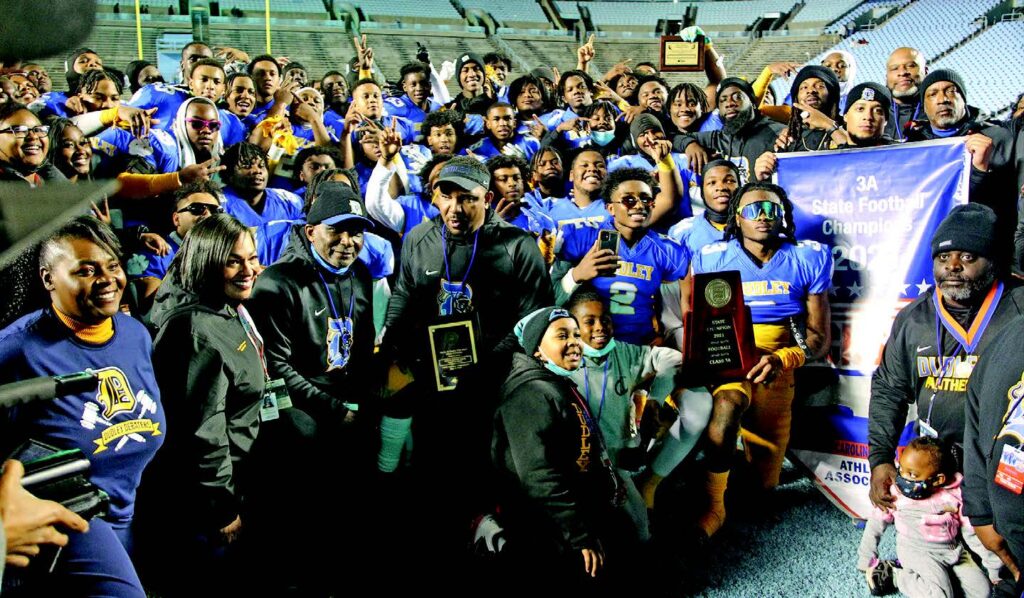 CHAPEL HILL – In the highest scoring neutral site State Championship Game in history, the Dudley Panthers blasted J.H. Rose 69-40 to win the school’s seventh Football State Championship and fifth title in NCHSAA play. The Panthers were led by quarterback Jahmier Slade who rushed for 98 yards and three touchdowns and throwing for two more with 115 yards passing on his way to winning MVP honors for the game.

Dudley scored the most points of any single team in a neutral site State Championship Game (most since 1989). The Panthers 69 points clipped the mark of 68 set by Reidsville in the 2003 2AA State Championship Game against Bandys. The two teams combined for the most points in a neutral site state championship game, eclipsing the record of 98 set by Western Alamance and North Gaston in the 2007 3A State Title Game. Dudley’s 42 first-half points tied the most points in a single half, a record held by three other teams: 2003 Reidsville, 2012 Butler, and 2015 Mallard Creek.

The Panthers rushed out to a 21-0 lead just 5:41 into the game. R.J. Baker opened the scoring running for a three-yard touchdown to capitalize on a short field for Dudley. The defense got into the act on the next series when heavy pressure forced an errant throw that found its way into the hands of Jaylan Richmond, who returned it 56 yards for a touchdown to go up 14-0. Logan Wright was a force on the defensive line for the Panthers all night, generating pressure in the Rampant backfield and making eight tackles in the game. He was named the Most Outstanding Defensive Player for Dudley.

After stopping Rose quickly, Michael Shaw took the first play of the next Dudley possession and ripped off a 76-yard score to go up 21-0. Shaw finished the game with 12 carries for 191 yards and a score as he was named the Most Outstanding Offensive Performer for the Panthers.

Just when things looked the worst for the Rampants, the Rose offense came to life as quarterback Will Taylor engineered an eight-play, 67-yard drive and found Jayden Grimes on a 13-yard crossing route to put the Rampants on the scoreboard. Grimes finished the night with Most Outstanding Offensive Performer honors for the Rampants, hauling in nine passes for 150 yards and two scores. On the ensuing Panther possession, Jameer Roach picked off Slade and took it 59 yards to the house to trim the Dudley lead to 21-14 with less than a minute to go in the opening quarter.

Dudley answered on their next possession to stop the momentum, marching 7 plays and 65 yards to score. Slade eluded multiple defenders and scrambled 24 yards to the end zone to cap the drive. After the Rampants cashed in a special teams miscue by Dudley on a 6-yard run by Klavon Brown, Dudley rolled off the next 22 points to seal the victory.