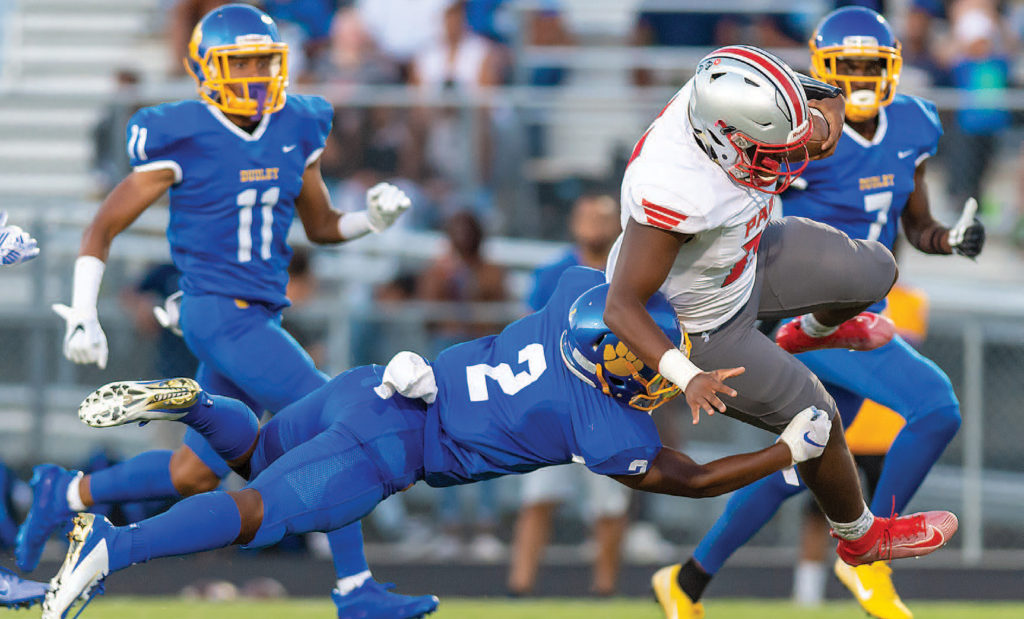 Even though the Panthers of Dudley High School led by just one score at halftime against Page on Sept. 6, you had the sense it was only a matter of time before the Panthers would eventually galvanize their superior talent and make enough plays to put the game out of reach.

And just like clockwork, Dudley came out the locker room in the second half with a renewed focus, quickly shutting down the Pirates’ offense and then scoring touchdowns on two straight possessions to cruise to a 35-14 home victory at Tarpley Stadium.

The win improved to Panthers’ record to 2-1 on the season and avenged a frustrating 28-7 road loss to the Pirates a season ago.

Boasting a roster that seems to feature a new star player each week, this time the Panthers got big contributions from senior running back Branson Adams who had touchdown runs of four and 14 yards in the second half to help Dudley pull away.

“We’ve got a lot of guys on this team who can put it in the end zone,” said Adams, who finished with six carries for 41 yards, and also added a 29-yard reception. “Most games, we have about two or three different guys who can put in the box.”

Davis said he was impressed by the performance of the young signal caller who continues to show improvements in his decision making and downfield accuracy.

“He made some great throws tonight and that’s what we’ve been asking of him all year,” said Davis. “We know we have to be patient with him because he’s just a sophomore and he’s still growing, but if he can continue to grow each game we can live with that.”

Slade’s main target on the night was fellow sophomore sensation Mekhi Wall who had three catches for 93 yards and a pair of first quarter touchdowns to give Dudley a quick 14-0 lead.

However, just when it appeared the contest was destined to become an early rout, Dudley allowed the Pirates to stay within striking distance due to some sloppy play on both sides of the ball.
Late in the second quarter, the Pirates embarked on an eight-play, 73 yard scoring drive that was capped by a 10-yard run up the middle by senior quarterback Javondre Paige.

The Panthers had a chance to respond right before halftime, but after driving down to Page’s 18 yard line, a spree of untimely penalties moved Dudley back to almost midfield and ensured that the halftime score remained 14-7.

“We didn’t end the first half very well, especially having good field position and that’s something I talked to my other coaches about at halftime,” said Davis, whose team was flagged for 12 penalties in the contest. “We have to make sure we capitalize on good field position and I think coming out in the second half, we did that.

Defensively, the Panthers completely derailed the Pirates running game all night and had the opposing quarterback under constant duress, recording five sacks.

Paige finished with 15-of-30 passing for 144 yards and recorded both a throwing and rushing touchdown. However, a great chunk of his yardage came when the game was well out of reach.

“We were undisciplined early on in this game,” said Davis. “That guy got outside the pocket on us a couple of times, but we made some adjustments in the second half and I thought we slowed him down.”
Page head coach Jared Rolfes credited Dudley’s conditioning with being the difference at the line of scrimmage.

“They played a little less tired than I thought they would be in the second half which made our protections really tough and affected our run schemes,” said Rofles. “We weren’t able to do some of the things that we wanted to do.”

After dropping their season opener to West Forsyth, the Panthers have now won two games in a row by three or more touchdowns and appear to be hitting their stride.

“The biggest thing for us right now is to not get complacent,” said Davis. “I told them that if we can continue to grow a little each day, by the end of the season we have a chance to be pretty good.”