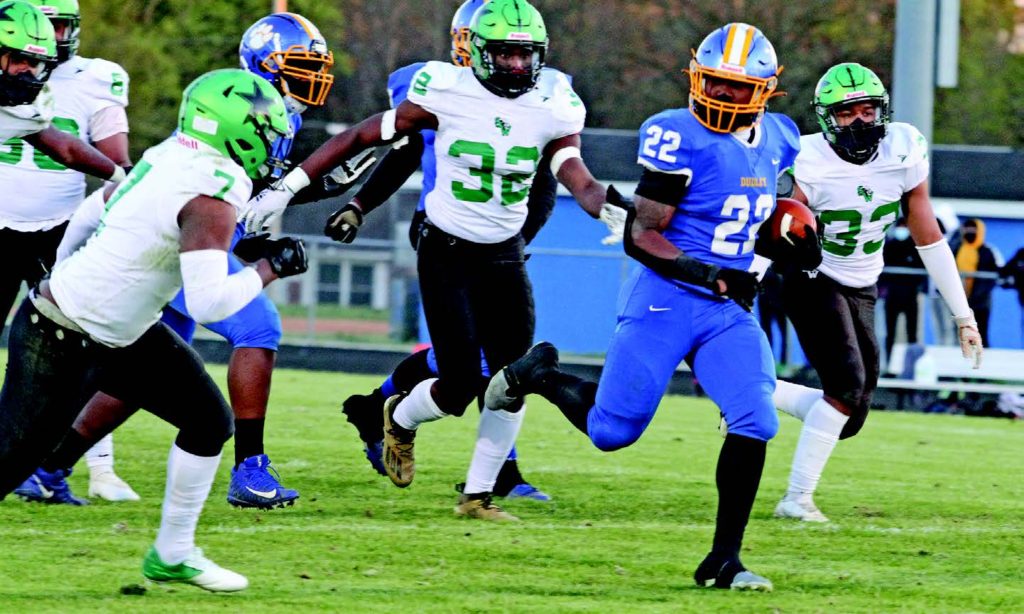 Any concerns about the Dudley Panthers’ psyche following their first loss of the season to Mount Tabor have now been put to rest thanks to two consecutive weeks of dominant performances.

After going on the road on March 26 to trounce Parkland 51-0, the Panthers returned to Tarpley Stadium on April 2 and continued their redemption tour, punishing Southwest Guilford on both sides of the line of scrimmage for a 42-21 win.

The victory improved Dudley’s overall record to 5-1 and earned them sole possession of second place in the Piedmont Triad 3-A conference with a 3-1 mark.

With a win in their season finale this week against a 1-4 Western Guilford squad, the Panthers should be in excellent position for an at-large berth in upcoming state playoffs.

“The loss a couple of weeks ago was partly on the coaching staff,” admitted Dudley head coach Steven Davis, who saw his team fall from the ranks of the unbeaten last month with the heartbreaking 9-6 defeat to Mount Tabor. “We’ll take blame for that. There were some things that we weren’t prepared for that they did against us, but even in that game we had our chances to win; we just didn’t make the plays. But overall, I’m happy for tonight. Our guys played extremely hard and were very resilient.”

Against Southwest Guilford, the big-play heroics came from senior running back Milan Summers, who continued to stake his claim as the best running back in the area.

Time and time again, when the Panthers needed a spark on offense or when it appeared the Cowboys were poised to make a rally, Dudley turned to their workhorse running back who responded with a game-high 212 rushing yards on 23 carries and four touchdowns.

“That’s just senior leadership,” said Davis. “He’s not very vocal but he just leads by example. And in order for us to continue to improve this season, that’s what it’s going to take. We don’t need a whole lot of hoopla. We need some action on the field.”

Summers’ first touchdown of the night came on a 49-yard scamper up the middle, on a drive that started after the Panthers recovered a fumble at midfield.

Southwest Guilford would respond quickly, when Jhmare White returned the ensuing kickoff 83 yards back to the Dudley 17 yard line. Two plays later, the Cowboys scored on a 13-yard reception by Quantez Poche and then completed the two-point conversion to take an 8-7 first-quarter lead.

Summers, however, was just getting started.

After both teams traded interceptions on their next drives, Summers gave the Panthers the lead for good with a 19-yard touchdown run and successful two-point conversion that put Dudley back on top, 15-8.

He would later add touchdown runs of 32 and 37 yards in the third and fourth quarters respectively, shutting the door on any hopes the Cowboys might have had for a late comeback.

“What was going through my head tonight was that we need this win, we need those first downs and I was not going to let my teammates and coaches down,” said the 5’8, 205 pound Summers. “This game tonight proved that we’re still ready to fight. You can’t count us out. We’re still in the playoff hunt. We still want it.”

Southwest Guilford entered the contest with a 4-1 record and riding a three-game winning streak.

Defensively, the game plan for Dudley was simple: keep Cowboys’ star quarterback Joey McGinnis under constant duress and make sure he didn’t have time to defeat them with his arm.

McGinnis completed 9-of-28 passes for 187 yards and a pair of touchdowns but also threw two costly interceptions.

“He’s a real good player,” said Davis about the Cowboys’ talented 6’0, 180-pound junior. “We just got after him and tried to make him uncomfortable. We didn’t want him sitting around and be able to see the field. We tried to get some pressure on him and make him hurry up and throw it.”

One of those picks was recorded by Dudley senior cornerback Sterling “Trip” Brewer off a tipped pass – the first interception of his career.

“It was almost in slow motion,” Brewer remembered. “When I first saw the ball go up, I didn’t think I was going to be able to get to it. But I just tried to run my fastest to make the play because I knew it would be a big game-changer for my team.”

That turnover led to a seven-play, 35-yard scoring drive that was capped off by a 24-yard pass from quarterback Jahmier Slade to 6-foot-4 wide receiver Franklin Stockton.

Brewer, who also forced a fumble in the contest, said he feels like the Panthers are now hitting their stride as they draw closer to the postseason.

“We are just going to take it one step at a time and make sure we all continue to do our jobs,” said Brewer. “We know that if we get a chance to compete in the playoffs, we’ll definitely be ready.”