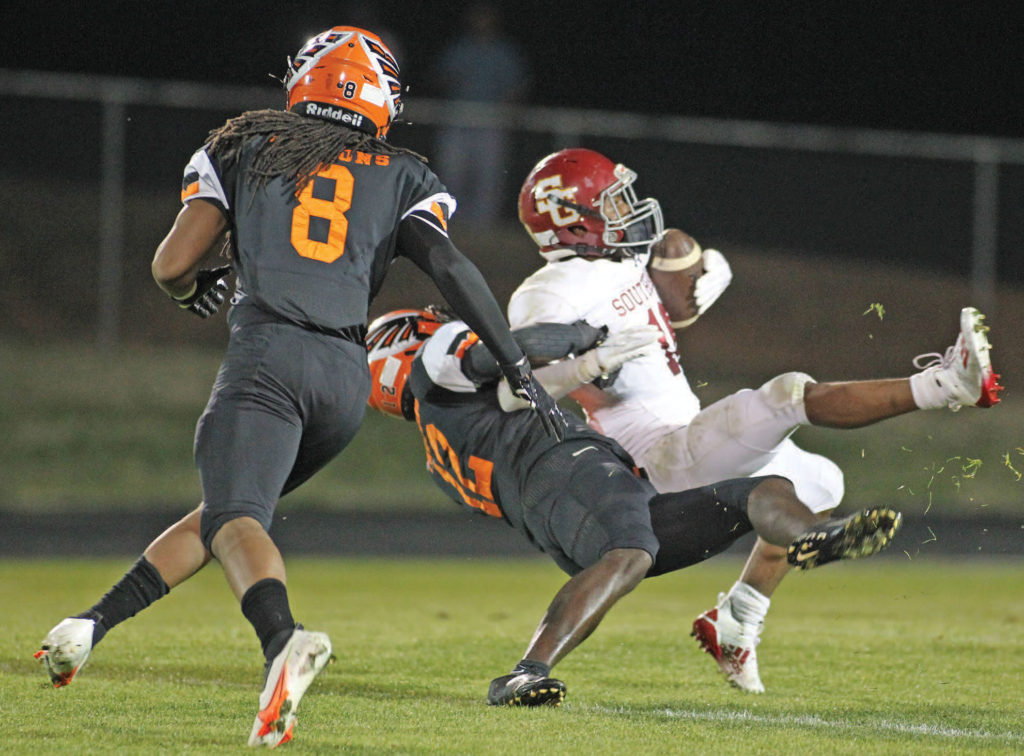 Southern Guilford Storm’s Taylor Alston (r) is tackled by the Falcons’ Jordan Farmer during first half play of a Mid-Piedmont 3-A conference game won by Southeast Guilford. Photo by Joe Daniels/Carolina Peacemaker.

The Southeast Guilford Falcons played host to the Southern Guilford Storm Friday night at the Bill Slayton Athletic Field with first place on the line to the winner in the Mid-Piedmont 3-A Conference. 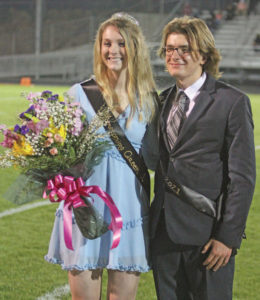 The Falcons prevailed with a convincing 21-0 win led by their defense.

The Falcons held the Storm to just 15 yards rushing and minus yards in the second half on 11 carries for 17 yards in the first half. Storm quarterback Conway McCoury threw for 192 yards, but was stopped twice inside the red zone during the first 24 minutes.

Offensively, Falcons’ senior running back Devon McQuitty rushed for 99-yards and a touchdown. Teammate Jalen Fairley had 20 carries for 84-yards and a rushing touchdown. While quarterback Zion Fleming completed five-of-13 passes for 132 yards and a touchdown. Any chance of a comeback was killed when the Falcons marched from their own nine-yard line to the Storm eight-yard line on 12 plays. The Falcons covered 83-yards which ate up the third quarter clock, kept the Storm offense off the field, but missed a 28-yard field goal. An interception and a fumble recovery were big drive killers for the Storm in the fourth quarter. Leading 14-0 in the fourth quarter, Jordan Farmer’s 45 punt-return iced the win.

“Our run defense was stout,” Southeast Guilford coach Earl Bates said, “We got penetration up front and we were pretty much able to keep them contained.”