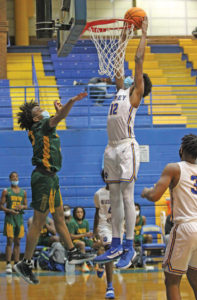 The win avenged a 64-63 loss earlier in the season to Smith on a buzzer beater. Both teams are tied for second place in the Piedmont Triad 3-A Conference with 4-2 marks trailing unbeaten Mount Tabor. The Panthers placed three players in double figures led by senior guard Ayden Gamble’s 19 points, senior forward Franklin Stockton’s 13 points and senior forward Jahree Braswell with 10. After a close 24-21 first half, Dudley opened a lead of 36-26 and Smith never got closer than eight points again.

The Panthers were able to capitalize on a Smith zone press by driving to the basket or getting easy shoots around the basket. From the second quarter on Dudley cut down on their turnovers and improved on their man-to-man defense along with their shot selection. If this were a closer game Dudley might have lost because of their poor free throw shooting.

Dudley improved to 5-4 overall, 4-2 in the conference, while Smith dropped to 7-3, 4-2. The Eagles were led by junior forward NayShaun Hale and senior center Maurice Hines with 10 points apiece.