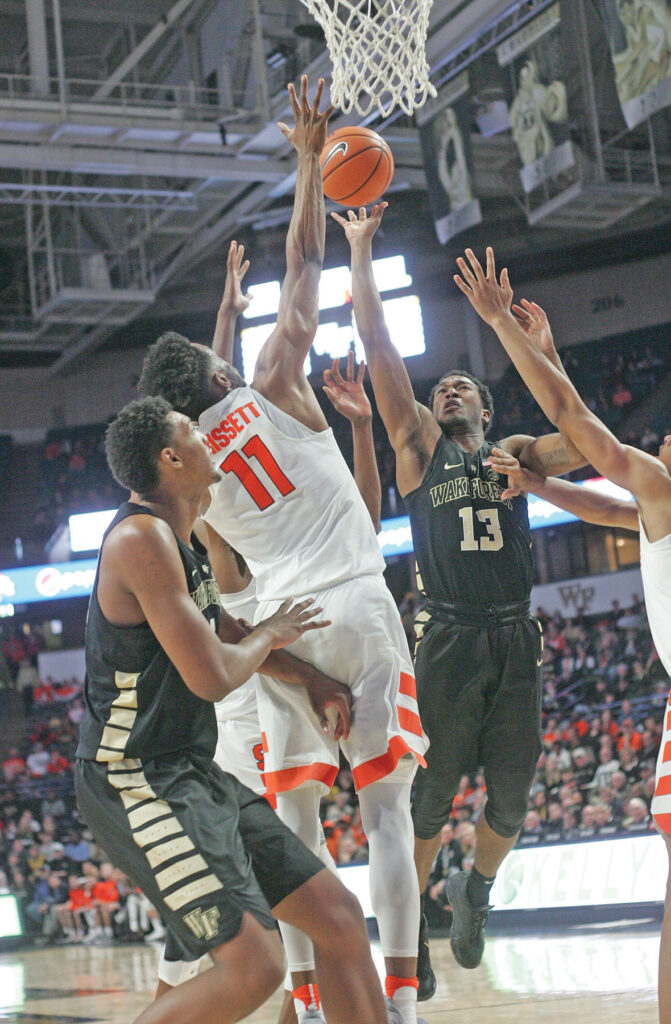 The Demon Deacons (8-6, 1-1 ACC) entered Wednesday’s game with an 0-5 series record against the Orange (12-3, 1-1 ACC) as they won the first ACC home opener victory in the coach Danny Manning era.

Bryant Crawford led the Deacs with 19 points, including a season-high four baskets from the 3-point line. It was his 13th double-figure game this season and 66th career double digit game.

Terrence Thompson, in his ACC home debut, scored a season-high 13 points and seven rebounds, while Mitchell Wilbekin had a career-high eight assists to go along with 10 points.

The Demon Deacons opened the contest 5-of-6 from the field to build up an early five-point lead. The Deacs continued to stay hot, extending that lead to eight on multiple occasions while shooting over 50 percent from the floor. However, the Orange used an 8-0 run as the Deacons went cold to tie the score, 25-all, with just over three minutes remaining in the half. Syracuse extended that run to 10-0 and took its first lead since a 3-2 advantage in the opening minutes. The run was capped at 12-0 as Wilbekin was fouled for a four-point play to break up the run. Tied up at 29 with 26.9 seconds remaining in the first half, Syracuse hit a 3-pointer with nine seconds to go to take a 32-29 lead into halftime.

Wake Forest tied the score 32-all early in the second half after Thompson split a pair of free throws then hit a jumper. Syracuse took advantage of a Deacon scoring drought to gain a four-point lead but buckets from Doral Moore and Crawford once again tied the game and started a back-and-forth battle. The Deacs went on a 6-0 run to take their first lead in over 14 minutes with nine minutes to go in the second half. However, the Orange countered with a 7-0 run to regain the lead. Crawford then hit back-to-back 3-pointers to cut Syracuse’s lead to one with just over five minutes to go. A triple from Chaundee Brown gave the Deacons the lead and began a 5-for-5 hot streak for the Deacs. The Deacons sealed the game at the charity stripe, hitting eight free throws in the final minute on their way to the 73-67 victory.