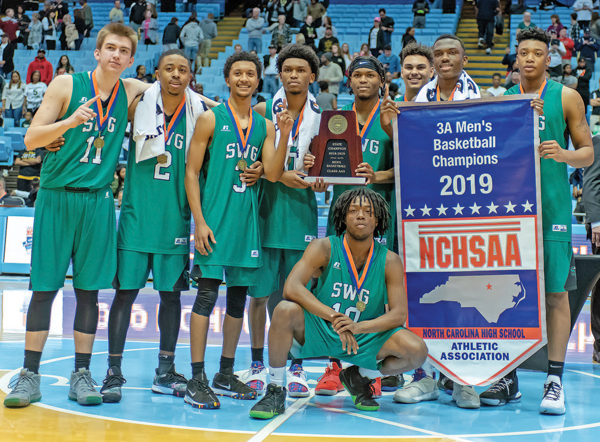 CHAPEL HILL – Burlington Williams surged out in front early, hitting Southwest Guilford with a 10-4 run to open the game. However, the Cowboys got back quickly, with a 7-0 run of their own to retake the lead at 11-10 and eventually pulled away from the Bulldogs in the second half on their way to a 67-60 victory and the school’s third NCHSAA Men’s Basketball State Championship.

Keyshaun Langley had 18 points and 11 rebounds while dishing out six assists for Southwest Guilford. He was a dominating force in the game, shooting eight for 15 from the field on his way to being named the Charlie Adams Most Valuable Player in the 3A Championship.

The Cowboys had two other players in double-figures, as Joel Pettiford and Cam Thompson each hit the mark. Pettiford dumped in 18 points and grabbed eight rebounds as he was chosen as Southwest Guilford’s Most Outstanding Player. Thompson scored 10 with a rebound and a steal on the evening.

Williams just could not overcome the Cowboys’ size advantage with Southwest Guilford winning the battle on the glass 40-30. The Cowboys turned that rebounding advantage into 26 second-chance points on their 17 offensive rebounds.

Southwest Guilford slowly built their lead up to 17 with 4:03 to go in the game, but the Bulldogs would not quit. The final four minutes of the game saw Williams continue to bother the Cowboys with pressure, forcing 15 turnovers during the game, working to whittle the lead down to seven with 34 seconds remaining.

The Bulldogs had four players in double-figures as Nasir Johnson led the way with 17 points while picking up three rebounds. He was selected as Williams’ Most Outstanding Player. Rashaud Alston powered the Bulldog attack and rebounding efforts, scoring 16 points and grabbing eight boards. Kennedy Miles chipped in 12 points and seven rebounds with Tamari Graves scoring 10 with a pair of rebounds and a pair of assists.