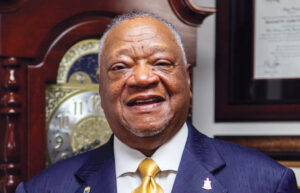 Asking how some of its national leadership can “…survive the stench of its cover-up” in the case of a “young gifted Black employee” who is suing the civil rights organization over an alleged sexual harassment incident, as well questioning the “integrity of the association,” or why it “continues to ignore its own constitution and bylaws and allow an unfair election to stand,” a concerned group of N.C. NAACP members who call themselves “The Justice Coalition,” led by NAACP Life member Rev. Dr. Cardes H. Brown Jr., pastor of New Light Missionary Baptist Church in Greensboro, issued a stinging written rebuke this week of the national NAACP for allegedly not following its own rules.

Several Black newspapers across North Carolina in recent weeks, including this one, have reported first and exclusively about the complaint filed by several N.C. NAACP members statewide with the national office after an October 23rd election was conducted allegedly in violation of the civil rights organization’s bylaws, calling the results into question.

Incumbent N.C. NAACP Pres. Dr. T. Anthony Spearman lost reelection as a result to New Hanover County NAACP Pres. Deborah Dicks-Maxwell. The complaint did not accuse Pres.-elect Maxwell of any wrongdoing, and in fact, she maintained she knew nothing about the complaint when asked about it later.

However, the complaint did point a finger at the person put in charge of administrating N.C. NAACP conference operations, Gloria Sweet-Love, president of the Tennessee NAACP Conference of Branches, and a national NAACP Board member.

Sweet-Love was accused of ignoring established NAACP election bylaws and requirements in how the election was conducted. As exclusively reported by several Black newspapers across North Carolina, including this one weeks ago, this is the second time Sweet-love has been accused of manipulating an NAACP conference executive election, the first being in Virginia a few years ago where she was also administrating.

Dr. Brown writes that at the request of various N.C. NAACP members, he notified the national NAACP leaders about her “wholesale violations,” however nothing happened. In fact, “…she judged her own conduct as righteous, and did not entertain any discussion of the four complaints we filed against her….”

The statement titled, “The Source of the Stench Within the National NAACP” didn’t stop there. It also referenced the Jasmine Childs versus NAACP litigation that’s pending in Durham Superior Court.

Childs, a former Youth Director for the N.C. NAACP, alleged in 2019 that she was sexually harassed by then supervisor and former member Rev. Curtis Gatewood. She filed a $20 million lawsuit against the civil rights organization in Feb. 2020. That case is still pending.

Rev. Gatewood tried to run for N.C. NAACP Conference president in 2019, only to be suspended, and then later reportedly booted out. In a recent “Motion to Dismiss” open letter, Gatewood denies the sexual harassment charges, and blamed accusations against him as part of an “unethical and clear violation of civil, human and worker’s rights.”

Rev. Brown closes the Justice Coalition statement by writing, “We make this statement with a heavy heart. We love the NAACP. We life-members and others who are interested in repairing the constitutional lapses of a handful of NAACP officers want the National leadership to join us in identifying and specifying the source of the stench. We are long past the deadline for talks….no one with the power to remove the stench has found the time nor the grace to contact us,” Rev. Brown said, adding, “This is not a poker game. Those of us who live on truth shall not fold the hand God dealt us.”