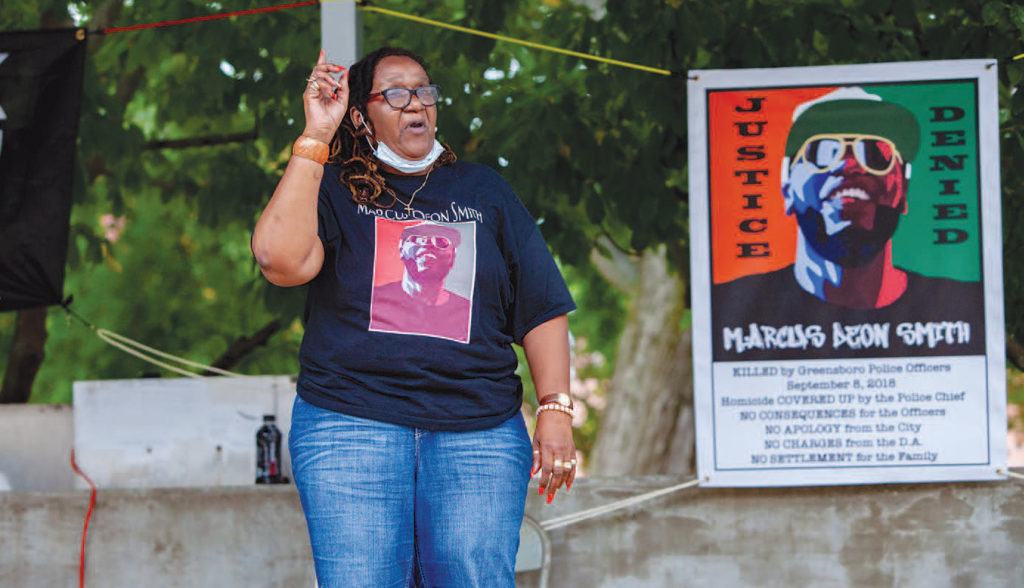 Mary Smith speaks during a rally Tuesday evening at Greensboro’s Governmental Plaza about the death of her son, Marcus, who had a mental health crisis, was restrained by being hogtied by law enforcement and died while in police custody. Photo by Ivan Saul Cutler/Carolina Peacemaker

On Tuesday night, two years to the day Marcus Smith had his life taken, his parents, George and Mary Smith, stood in front of hundreds of people at the Phill G. McDonald Plaza and recounted the story of their son’s death at the hands of Greensboro Police.

“Since that day, I’ve been in a mental casket,” said Mary, while standing next to a picture of her son in his casket. “I want to try to explain to you what it really feels like to have your child killed at the hands of the police. Everywhere I go, I see Marcus’ casket.”

September 8 marked the anniversary of Smith’s death. The Greensboro Justice Coalition, a grassroots group of local organizations formed to address police violence and abuse, held a Justice for Marcus Smith Commemoration program to remember Smith and call for redress from the city.

“This is real injustice and it has not been addressed,” said Rev. Nelson Johnson of Beloved Community Center, a member of the Greensboro Justice Coalition.

On September 8, 2018, Marcus Smith, a 38-year-old African American man, who was homeless at the time of his death, was experiencing a mental health crisis when he approached Greensboro police officers for help.

In police body camera footage that was released to the community three months after the incident, officers are seen subduing a disoriented Smith with a RIPP Hobble device, commonly referred to as the ‘hogtie restraint,’ where a person’s wrists are bound to their ankles behind their back. Smith stopped breathing shortly thereafter. In an autopsy report released on November 30, 2018, the North Carolina State Medical Examiner’s office listed that drugs and alcohol were found in Smith’s system, as well as cardiovascular disease, but ruled that Smith being in the position of “prone restraint” played a significant role in his death.

Former Greensboro Police Chief Wayne Scott sent out a press release before the State Bureau of Investigation completed their report stating that Smith ‘collapsed’ and ‘died an hour later at the hospital.’ However, police camera footage showed that officers noticed he stopped breathing while he was still restrained on the street.

The Smith family continues to travel from South Carolina to Greensboro regularly, seeking justice for Marcus. They have a lawsuit filed against the City of Greensboro, the eight officers and two paramedics involved, saying that Smith was improperly restrained and law enforcement and paramedics failed to respond to his medical needs.

The Justice for Marcus Smith Commemoration program also included songs, chants and stories from other community members who have experienced excessive force and abuse at the hands of police. Greensboro resident, Zared Jones spoke about a 2016 interaction with GPD officers in downtown Greensboro that left him and his friends Tased, beaten and arrested.

“They assaulted all of us and had no justification for any of it. The city has done nothing to hold these officers accountable,” said Jones. “It’s all of our responsibility to ensure that this doesn’t continue to happen.”

Brie Neville, the daughter of 56 year-old John Neville, the African American man who died from a brain injury due to cardiac arrest, caused by asphyxia during a ‘prone restraint’ by correctional officers in the Forsyth County Detention Center in December 2019, also spoke to the crowd. Five correctional officers and one nurse were charged in August 2020 in her father’s death. She encouraged people to keep up the fight for justice.

“Achieving justice starts in our own communities. We know that silence is violence,” she said.

The Greensboro Justice Coalition created a list of seven demands to present to the Greensboro City Council regarding accountability and justice for Smith and his family:

The group is pushing for the city council to vote on the list of demands at its next council meeting on September 15. The council is expected to take up a vote on the group’s seventh demand, which is a policy to require police to get written consent, not videotaped, before conducting a search without a warrant.