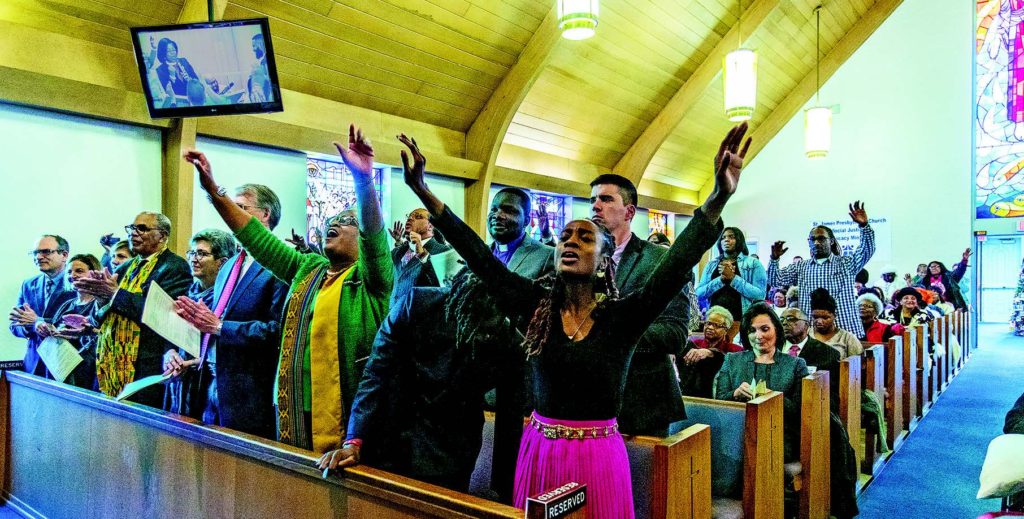 “Gather the courage to fight on. We will renew the fabric of our democracy with threads of hope, threads of love and threads of equality.”

That was the resounding message that echoed from the speaker Monday throughout Saint James Presbyterian Church to a crowd of roughly 250 people looking for their own message of hope, some still 50 plus years later, despite celebrating the life and dream of Martin Luther King Jr.

Though King was not speaking the words, the message was eerily the same. Rev. Hanna Broom, presiding elder of the Dunn-Lillington District of the AME Zion Church and co-chair of the Poor People’s Campaign Moral Movement, said that she was trying to find words to see a stronger desire to see the dream of the King fulfilled, but it seems that a large part of society is up against some insurmountable odds.

“If health is wealth then we are poverty stricken. It seems as if we’re in some hopeless situations, but I want us today to gather the courage to fight on,” she said. “There cannot be a love of all mankind and we select just a few to help. The laws that are being passed and executed are a mockery to our democracy. We can no longer stand around as faith community leaders and preachers and preach heavens highway while our communities are living in despair, confusion and hell.”

Broom told the crowd that the legacy of King should not be measured in the persistence of racism but in the fight for justice combined with hope and realism that he brought to the struggles of marginalized people everywhere.

“I’m here today, not to point out failures, but to promote progress. I’m here today, not to demonize people, but to demolish preconceived ideas that we made it,” she said. “The moral fabric of our country must be resewn with actions that reach everyone regardless of your social status or your ethnicity. We must fight on in power to change the narrative that we will no longer sit idly by and be reactive to circumstances but will be proactive and strategic in whom we vote for and who we hold accountable.”

The city’s history of racial tension includes the Greensboro Sit-ins,od the 1960’s, the Greensboro Massacre of 1979, and more recently the case of Marcus Deon Smith, a Black man, who died in police custody. All of these events have brought issues of race, law enforcement accountability and socioeconomic disparities to the forefornt of community and city council discussions. Mayor Nancy Vaughan told the audience that although we often hear about “two cities” when it comes to Greensboro, the city council works hard to strive for equity on a regular basis.

“We know that we want equity in our city as our legacy. We strive very hard to do this on a regular basis whether it’s contracting, housing or food security. We know that when you drive from the westside to the eastside that it’s different and we take Dr. Martin Luther King’s words to heart,” Vaughan said.

State Senator Gladys Robinson told the audience that while we pinpoint what the issues are in our communities,we must also acknowledge that we have a long way to go and how best to fix those issues.

“In the General Assembly, there has been a perpetual theme of injustice, inequality, racism, classism and sexism. The sensible solutions to poverty and illiteracy have been met instead with cynicism and hatred rather than implementing the law of Medicaid expansion, guaranteeing healthcare for all, maintaining or increasing the eligibility for food stamps (SNAP) and increasing funding for education, educator salaries and facilities, there continues to be in our state a refusal to feed the poor, to give healthcare to those in need and educate our children,” Robinson said. “Change does not roll in on the wheels of inequitably but comes through continuous struggle.”

For more information on the Poor People’s Campaign and its work, visit www.poorpeoplescampaign.org.