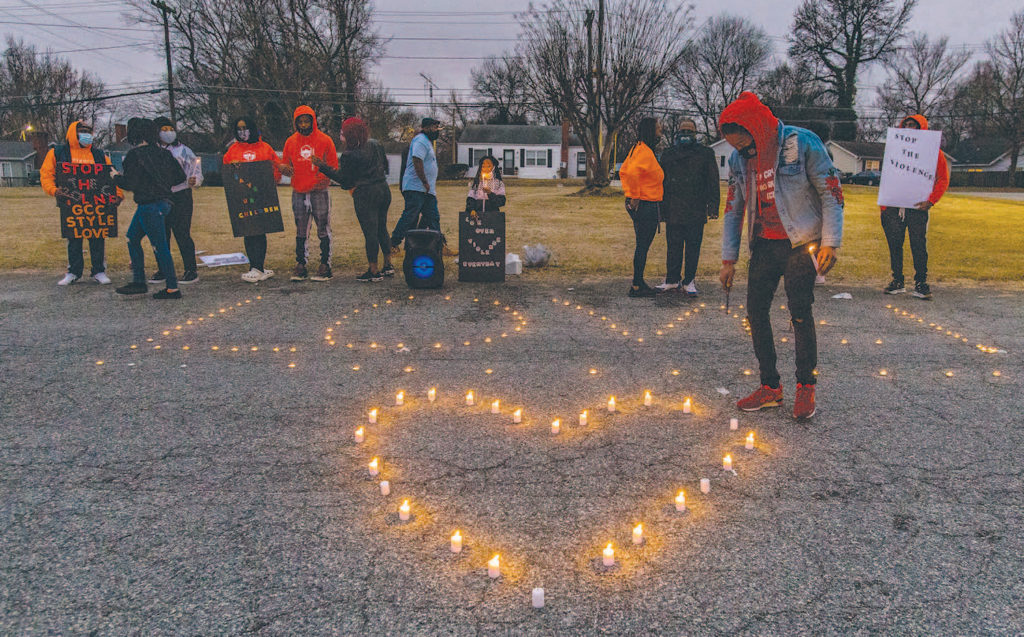 Vigil attendees show their love for the people whose lives have been lost to gun violence.
Photo by Ivan Saul Cutler/Carolina Peacemaker.

Barely two months into 2021 and the City of Greensboro has already had seven gun related deaths.

“The fact that our homicides are higher than last year is heartbreaking,” said Ingram Bell, a supervisor with the Gate City Coalition Cure Violence Team. “We’re tired of crying; we’re tired of seeing parents burying their children. Something has to change.”

“We’ve got to find a way because enough is enough. We are here because we love this city and there is a better way. We can’t glorify gun violence anymore. The very first step is to put the guns down and we need everyone to get that word out,” she said.

Greensboro ended 2020 with 60 homicides, up from 45 homicides in 2019 and 40 in 2018. The Greensboro Police Department also reported that the number of assaults with firearms in Greensboro had increased by 17 percent from 2019 to 2020.

“Seven deaths by February 10th, we cannot allow this to happen. We are having a genocide right here in the City of Greensboro of Black men,” said Mayor Vaughan.

Shawn Jackson, a supervisor with the Gate City Coalition Cure Violence initiative in Greensboro noted that the best way to change the city’s gun violence narrative is for the community to come together to provide support and resources. He also pointed out the important role that outreach workers and violence interrupters fill in the community.

“We actually deal with gang members and felons that go to jail on a consistent basis. We are in the communities trying to mediate,” said Jackson.

Councilmember Justin Outling and candidate for mayor of Greensboro called out unemployment and housing as the root causes of crime and violence, but not everyone agreed. While other speakers acknowledged the lack of financial and social resources, they also discussed how Black men can lead other Black men to be part of the solution and not the problem.

“We’re here because of the rage and violence in our city. This is way deeper than just money and jobs,” said Anthony Morgan, a community organizer. “You can give us all the money in the world. If you don’t start working on our consciousness, if you don’t start trying to love us as who we are as Black men in our struggle, nothing will ever change.”

Morgan urged people to be unafraid to embrace others who are different from themselves.

“Change is going to take the whole community – that’s Black and White. We can’t scream about White supremacy if we’re not loving on our own community. Yes, its systematic, but now’s the time for accountability within ourselves,” he added.

Bell noted that daily canvassing of the target areas, to talking with people about what resources they need – whether its food, employment or education – has decreased the number of shootings in those communities. She added that an important piece of the program is that the people working towards change look like and understand the communities they are trying to help.

The Gate City Coalition is also spearheading a women’s empowerment initiative and a Father/Daughter dance in the coming months.