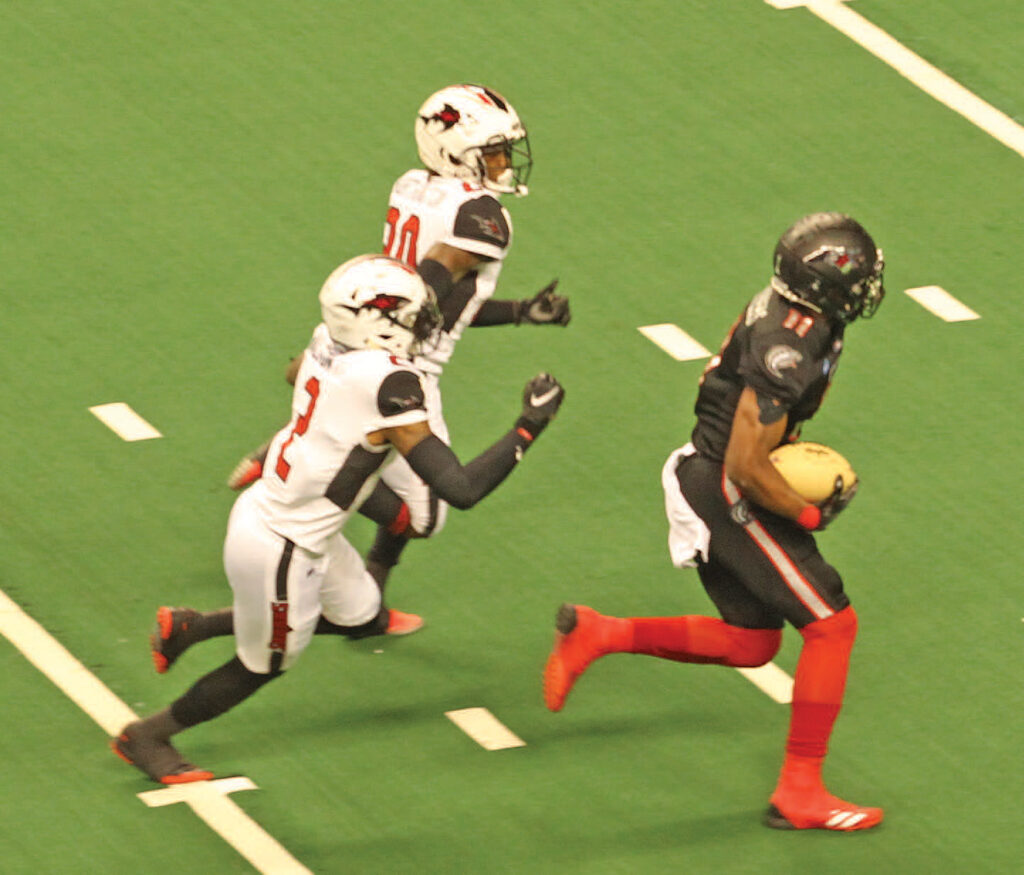 James Summers, a Page and ECU alumnus, rushed four times for 32 yards and completed 3 of 7 passes for 51 yards and a touchdown in a 54-52 loss Saturday at the GSO Coliseum to the Jacksonville Sharks. Photo by Joe Daniels/Carolina Peacemaker.

Following their bye week, the (1-3) Cobras were home to take on the (1-3) Jacksonville Sharks. The last time these two teams met was at the 2019 championship game in Jacksonville, where the Sharks came from behind to win 52-48. This rematch in Greensboro did not disappoint in a thrilling second half the Cobras comeback ignited the crowd as the Cobras were closing in on victory but finished just two-points shy on the final play of the game to Jacksonville.

James Summers got the start at quarterback and gave the Cobras a spark early, taking off for a 28-yard QB sneak on their first drive. That run would set up full back Dashawn Johnson to cross the goal line for his first touchdown of the season. In the next possession, Summers kept the offense hot, tossing an 18-yard touchdown pass to top target Kendrick Ings. The defense was also rocking early with a forced fumble and recovery from Cobras defensive lineman Ethan Farmer.

But after the first period, the Sharks led 21-12 as Danny Southwick threw two touchdowns to Shark’s receiver Jarmon Fortson and Jordan Williams. Cobras began to struggle after Summers left the game with an injury. Sam Castronova found wide receiver BJ Bunn in the end zone as the clock hit zero to end the half down 33-18 and to gain some momentum into the second half. Following halftime Castronova picked apart Sharks’ defense resulting in another Ings touchdown right out of the gate. The defense on the following drive kept the crowd on their feet causing turnovers on downs. The momentum continued to lean towards the Cobras as Johnson scored another touchdown with Castronova sneaking into the end zone to convert for two.

The 4th quarter became a nail biter and lived up to the Cobras and Sharks rematch hype as Carolina got in striking distance after Ings 45-yard touchdown bringing the score to 48-46 in favor of Jacksonville. The following play, Adam Smith did what he does best, kicked an onside ball that had the perfect bounce for a recovery by the Cobras in scoring position. Then with 32 seconds left on the clock Johnson pulled off the hat trick, running in for his third touchdown of the game to give the Cobras a 52-48 lead. Despite the heroic efforts by Ings and Johnson, it was a 25-yard touchdown pass from Southwick to Devin Wilson that was the final nail, the Cobras strung together a final drive that got Carolina in scoring range but time expired with the Cobras two-points short 54-52.

Cobras’ Castronova completed 16 for 29 passes, 183 yards with four touchdowns with two interceptions. Ings continued his dominant year snagging nine catches for 125 yards and three touchdowns. The duo between Castronova and Ings seemed to pick up right where it left off as receiver Ings completed another three-touchdown night as a Cobra.

The Cobras (1-4) will head into week eight against the Orlando Predators (3-3) with only three games remaining left in the season. Kickoff in the Snake Pit is set for 7 p.m.