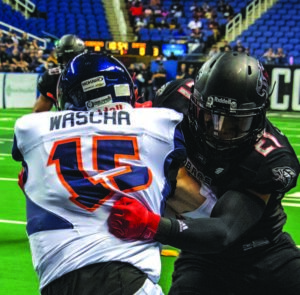 The Carolina Cobra’s Kendrick Ings has two touchdown receptions during the 59-56 win over Albany Empire. Photo by Joseph Navin/Carolina Peacemaker.

The Cobras (7-2) saw a 15-point lead disappear in the fourth quarter, only to regroup and claim the win. Quarterback Jonathan Bane added six touchdown passes to his league-leading 36, while D.J. Myers and Kendrick Ings both hauled in two scores to lead the Cobras. Bane completed passes to seven different receivers Saturday including a breakout performance by Adam Smith, who had six receptions and a touchdown in the victory.

Albany (4-3) received the opening kick and took five minutes of game time to march down the field before quarterback Sam Castronovo hit Aaron Wascha for an 8-yard touchdown. Carolina answered with a 7-play drive of its own, with NAL leading rusher Zack Brown pushing his way into the end zone on third-and-goal from the Albany 1-yard line. Those opening drives turned out to be the only scoring in the first quarter, and the second began with the Cobras threatening once again on the Albany goal line. However, Stevens uncharacteristically missed a field goal and the score remained tied. From there, however, the offense began to pick up. The score was tied at 21 late in the second quarter with the Empire threatening. However, a turnover allowed Carolina just enough time to try and grab a lead before half. Bane found Kendrick Ings wide open in the end zone and the Cobras led 28-21.

After an exciting extended halftime featuring local artists paired with national recording artist Petey Pablo, Albany kicked off to start the second half. Carolina drove straight down the field, but the opportunity to extend the lead went for naught, as Stevens missed a field goal by mere inches. The Cobras’ offense then exploded, padding the lead before beginning the final quarter with a 15-point margin and, seemingly, a stranglehold on the game.

The Empire, faced with the threat of dropping 2.5 games back of first and firmly in the middle of the NAL pack, responded with an offensive explosion of its own including strikes to Cobra-killer Darius Prince and Dwayne Hollis to tie the game late. Carolina quickly righted itself and grabbed a late 7-point lead, but a controversial facemask penalty on 4th-and-long with 43 seconds remaining gave the Empire new life and resulted in a game tying-touchdown.

Albany, though, made a grave mistake in scoring- there was still time on the clock. On first down with less than 30 seconds to play and no timeouts, Bane hit Smith on a gorgeous route that gave the Cobras a first down at the Albany 15-yard line, and T.C. Stevens made it academic to give the Cobras their third victory over the Empire, and the most important victory to date.
One of the characteristics that drives opposing coaches crazy is the Cobras’ depth, and the ability to strike (pun intended) from any area, with any player. Aside from Bane’s six touchdowns to four different receivers, the Cobras added two rushing touchdowns. And if many in the crowd were surprised by Smith’s breakout performance, Bane and his teammates were decidedly not. “The fans may be surprised but we’re not,” Bane said after the game. “We see it every day in practice. We know he’s going to be there for us and I’m so happy for him.”

A trip to visit San Antonio waits (Saturday, 7 p.m.), and the Gunslingers (2-5) are on the rise both with new ownership and a two-game win streak. After that, the Cobras will be back, home sweet home, to face the Columbus Lions in a revenge game to pay back last week’s loss.